NEW YORK, NY.- The Metropolitan Museum of Art in New York and the Ministry of Culture, Sports and Tourism of the Republic of Korea signed a memorandum of understanding today at the Museum, establishing a long-term relationship of cooperation in the area of Korean art and culture. The agreement was signed on behalf of the Metropolitan Museum by Daniel H. Weiss, President, and on behalf of the Ministry by Seung Je Oh, Director of the Korean Cultural Service of New York.

On this occasion, the Ministry further announced a gift of approximately $1 million (KRW 1,250,000,000) to the Metropolitan Museum, where the gift will fund initiatives over a three-year period, 2016–2018, including a major exhibition in 2018, enhancement of the presentation of Korean art in the Museum's Arts of Korea Gallery, and support for new collaborative scholarship. The Metropolitan intends to collaborate with the National Museum of Korea on projects funded by this gift.

Thomas P. Campbell, Director and CEO of The Metropolitan Museum of Art, commented: "This landmark agreement with the Ministry is particularly meaningful now, as we look ahead to 2018—when the Met will celebrate the 20th anniversary of our Arts of Korea Gallery and the Republic of Korea will host the Olympic Winter Games. The new initiatives made possible by their generous gift of funding will enable us to expand our programming of exhibitions, gallery installations, and publications, and to undertake important new research."

Kim Jongdeok, Minister of Culture, Sports and Tourism for the Republic of Korea, said: "We are pleased to support the Metropolitan Museum's Arts of Korea Gallery and programs as part of our government's continuing efforts to facilitate cooperation among museums and to expand the reach of the Korean wave (hallyu). Our ultimate goal is to increase awareness of Korean culture globally."

Korean Art at the Met
The Metropolitan Museum of Art opened its Arts of Korea Gallery in 1998 with generous support from the Korea Foundation and the Samsung Foundation of Culture. The gallery was designed by architect Kyu Sung Woo. Highlights of the Museum's Korean art collection are celadon ceramics and Buddhist paintings of the Goryeo dynasty (918–1392) and porcelain and lacquer of the Joseon dynasty (1392–1910). Along with changing displays of works of art from the collection, the Museum periodically presents thematic exhibitions featuring loans from collections in the United States and abroad, providing an overview of Korea's artistic and cultural heritage.

Currently on view in the Met's Arts of Korea Gallery is Korea: 100 Years of Collecting at the Met (through March 27, 2016), which showcases more than 70 masterworks in a variety of media and highlights the individuals and trends that shaped the Metropolitan's distinctive collection, sometimes deliberately and other times accidentally. Major gifts to the Museum from the renowned collections of Mary Griggs Burke and of Herbert and Florence Irving in spring 2016 have recently been added to the display. Particularly noteworthy are two rare and exquisite paintings—a royal-commissioned Shakyamuni triad dating to 1565 and an early 17th-century Bamboo in the wind by Yi Jeong (1554–1626), the premier artist of ink bamboo and a great-great-grandson of King Sejong (r.1418–50); a striking gilt-wood statue of a seated Buddhist deity; and exquisite examples of lacquer, especially Clothing box with decoration of dragons, masterfully inlaid with mother-of-pearl, ray skin, and tortoise shell. 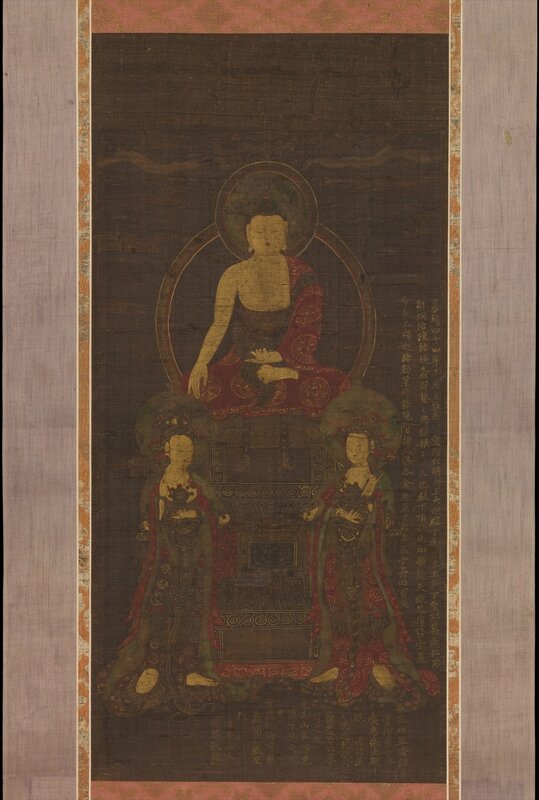