NEW YORK, NY.- The New-York Historical Society's jewel-like, early Renaissance painting Madonna and Child Enthroned with Ten Saints: Maestà is back on Central Park West for a special exhibition this winter. On view from December 11, 2015, through March 20, 2016, Maestà highlights the work that was originally the central panel of a folding Florentine devotional triptych, painted ca. 1330–34 by Taddeo Gaddi, the major disciple of Giotto.

Following conservation by the J. Paul Getty Museum―after which it was shown at the Getty and the Art Gallery of Ontario in the exhibition Florence at the Dawn of the Renaissance: Painting and Illumination, 1300–1350―and new research by Dr. Roberta J.M. Olson, curator of Maestà, Gaddi’s painting takes pride of place in this focus exhibition. The work is being shown for the first time with two double-sided wings on loan from a private collection, whose similar dates, physical features, and iconography suggest that the trio may have belonged to the same triptych. The exhibition explains conservation technologies, show how details of the works offer clues confirming the connection of the panels, and present a digitally animated reconstruction of how the original work functioned within a hypothetical tripartite frame. Complementing the Maestà, the exhibition showcases two other 14th- and early-15th-century Italian panel paintings donated to New-York Historical in 1867 by Thomas Jefferson Bryan, a pioneering New York collector of European and American art, and one of the first to value “Italian primitives” (i.e., painters before Raphael), a taste then avant-garde. “We are so pleased that our Renaissance jewel is home after conservation, with the added thrill that we can now imagine it as the artist originally intended,” said Dr. Louise Mirrer, President and CEO of the New-York Historical Society. “As New York’s first museum, we are proud stewards of works gifted by pioneering connoisseurs like Thomas Jefferson Bryan, whose foresight allowed such masterworks to be seen in New York.”

Organized by Dr. Olson, Curator of Drawings at the New-York Historical Society, Maestà: Gaddi’s Triptych Reunited focuses on the central panel of the triptych―the Maestà, an image in which the Madonna and Child are enthroned in majesty. The holy pair is flanked by ten figures who were probably patron saints of the patron’s family, including John the Baptist (patron saint of Florence), Saint Peter, Saint Paul, Saint Agnes, Florentine civic saints, and others. The approximately 13-by-9 inch panel is painted in tempera, gesso, and gold leaf on panel, with the golden background signaling a heavenly setting for the figures. An expensive, cutting-edge commission at the time for a Florentine palazzo, these types of devotional images evolved from single-panel icons and could be used during travel as they were easily portable. They suggest a growing economic prosperity and a greater interest in the secular sphere. 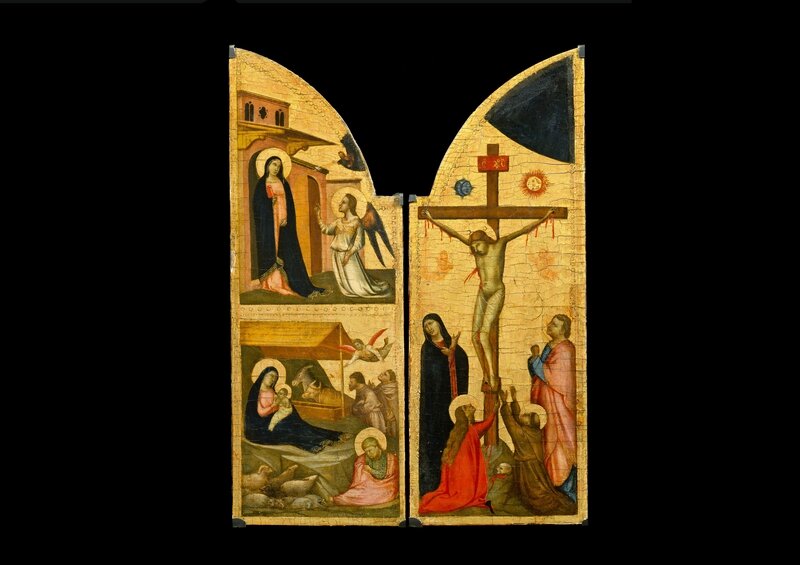 The shutters, or sportelli, were at one point divided into two interior and two exterior panels. The inner faces of the shutter feature scenes of the Annunciation, Nativity, and Crucifixion, painted in the same hand as the Maestà. The Crucifixion scene contains a revolutionary depiction of a total solar eclipse (first proposed by Olson in the Getty exhibition catalogue), which Gaddi himself witnessed in 1330 and that caused him temporary blindness. It symbolizes the cosmos in chaos and lends an immediacy and topicality to the work. The outer faces of the shutters feature on the left Saint Catherine of Alexandria, patroness of young girls and students, and on the right ex-Saint Christopher, patron saint of travelers. Unlike the figures in the interior scenes, these larger individuals seem to have been painted by another artist in Gaddi’s workshop.

New findings from the Getty’s conservation of the Maestà are included in the exhibition, as well as a digital reconstruction that imagines the work’s now-lost frame, based on similar frames on surviving triptychs by Gaddi and other Florentine painters of the period. Other clues, such as remnants of hinges, punch marks, and trace materials seen with x-radiography, enabled Dr. Olson to conclude that the Maestà and the shutters were once related. Additional works on view in Maestà: Gaddi’s Triptych Reunited were donated to New-York Historical by Thomas Jefferson Bryan, including Triumph of Julius Caesar (ca. 1445–65) by Giovanni di Ser Giovanni, depicting the military parade (or “triumph”) entering the gates of a city resembling Florence and the surrounding Tuscan countryside; and The Crucifixion (ca. 1315) by a follower of Duccio, the Sienese rival of Giotto, that was once half of a diptych used for private devotions. A portrait of Bryan by Thomas Sully and catalogues from the Bryan Gallery of Christian Art provide additional background on the collector.