FLORENCE - The considerable number of Florentine paintings "in the modern manner" hanging in the Galleria dell'Accademia's David Tribune includes a monumental altarpiece of the Immaculate Conception by Carlo Portelli – dated 1566 and formerly in the church of Ognissanti – which may rightly be considered to be his masterpiece. Yet this painter's work has never received the critical acclaim that it deserves, despite his being the recipient of important commissions in his own day and one of the artists most active in the large decorative schemes commissioned by the House of Medici. Thus there was every good reason for using this visionary painting, reminiscent of the style of Rosso Fiorentino and which so shocked poor Raffaello Borghini (1584) with its brazen and irreverent display of Eve's nudity in the foreground, as the centerpiece of an exhibition comprising all of the pictures that can be reliably attributed to Portelli. Thanks to further research and study specially commissioned to tie in with the exhibition, it has proven possible to clarify Portelli's role in Florentine art in the age of Vasari once and for all. The exhibition, which comprises some fifty paintings, drawings and documents, sets out not only to enhance the Galleria dell'Accademia's own altarpiece but also to encourage the crowds that daily visit the gallery to discover an artist hitherto known only to the experts, when in fact he deserves far wider appreciation for his originality, his imagination and his ability to translate inventive concepts into painting in the manner of Vasari. After moving to Florence from Loro Ciuffenna, his birthplace, at an unspecified date, Vasari tells us that Carlo trained in the well-established, if crowded, workshop of Ridolfo del Ghirlandaio and that by 1538 he had already enrolled in the Company of St. Luke, or Painters' Guild. The following year he was working with Salviati on the apparatus for Cosimo I's wedding to Eleonora of Toledo, completing an ephemeral painting of the Coronation of Cosimo I for which the Louvre has a preparatory drawing by Salviati (on display in the exhibition). Portelli's imposing altarpieces on display in the exhibition provide an overview of his career. The Santa Felicita altarpiece of the Holy Trinity, which may be dated to shortly after 1544, shows him to be an artist who, while seeking his inspiration in the work of the great masters, was already capable of orchestrating a composition in his own right, affording depth to his figures in the illusory space on the canvas. Renting a workshop of his own in 1548, he is reported to have embarked on an intense career as a painter of religious pictures, evidence of which can be found in his altarpieces of 1555: the Loro Annunciation, the Santa Croce Disputation on the Trinity and the San Salvi Adoration of the Shepherds, the latter two originally in the church of Monticelli. 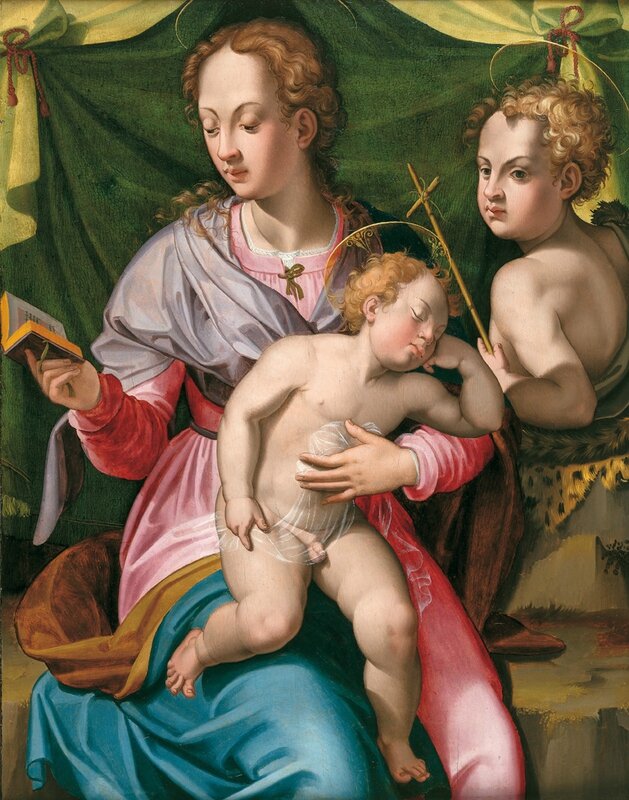 Two years later he completed the Martyrdom of St. Romulus, an altarpiece which is at once grandiose and crowded (a feature it shares with Rosso's altarpieces). The Gabinetto Disegni e Stampe delle Gallerie degli Uffizi has a preparatory study in red pencil depicting the head of a girl in profile seen in the painting (the drawing is on display in the exhibition). Portelli's other known drawings, also on display in the exhibition, are generally characterised by the unmistakably fine line, drawn with the very tip of his pen, with which he summarily sketched his figures. One of the first artists to join the newly-established Accademia delle Arti del Disegno in 1563, Portelli was to remain a member until his death in 1574. During that time he not only produced such altarpieces as the Loro Lamentation (1561), the Immaculate Conception (1566), the Olmi Restitution of the True Cross (1569) and the Colle di Buggiano Christ Preaching with St. John the Baptist, St. John the Evangelist and the Patrons (1571), but also catered for the devotional needs of private patrons who ordered Holy Families (now in foreign museums or which have appeared on the antique market over the years) and Allegories of Charity (Madrid, Arezzo and Florence). He turned his hand with some success also to portraiture, with paintings now to be found in Chaàlis and with the allegorical and celebratory Portrait of Giovanni dalle Bande Nere now in Minneapolis, which owes a debt both to Giovan Paolo Pace's Portrait of a Mercenary Captain in the Uffizi and to a portrait in the Galleria Palatina attributed by Cecchi to Salviati, both of which are on display alongside Portelli's work. 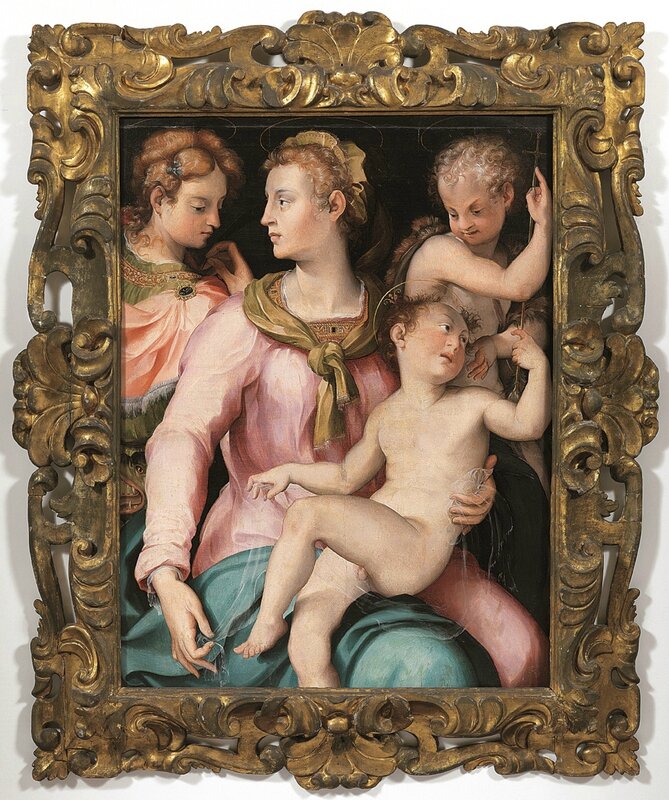 After working on the apparatus for Francesco I de' Medici's wedding with Joanna of Austria in 1565, with paintings in Borgognissanti and at the arch of the Canto della Paglia, he was to wind up his career by working in conjunction with others on the decoration of the Prince's Studiolo in Palazzo Vecchio, a trace of which may be found in his drawing of Alexander the Great and the Family of Darius (GDSU). 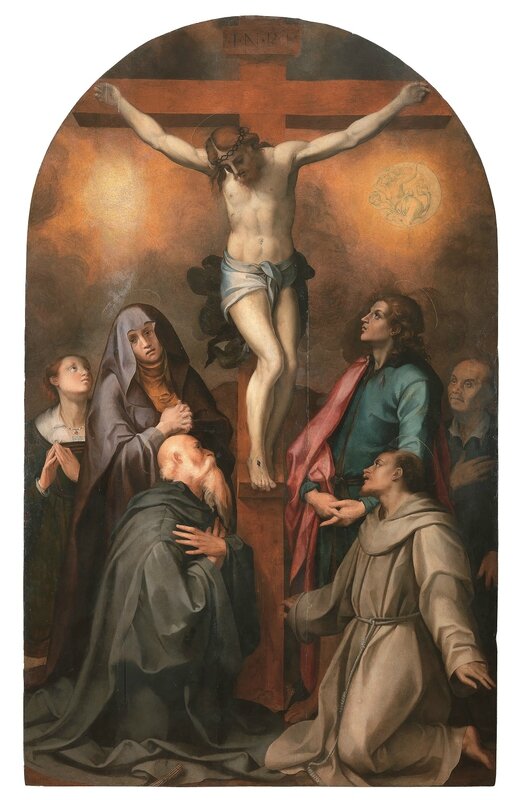 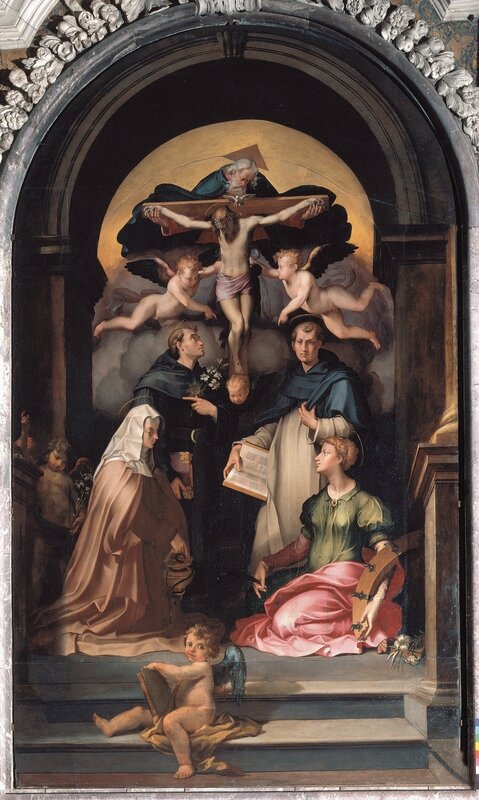 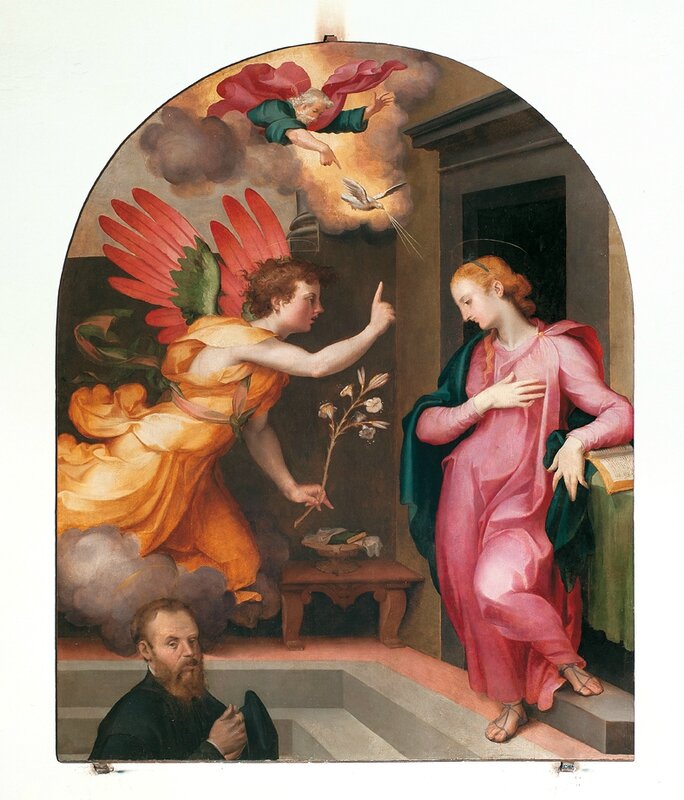 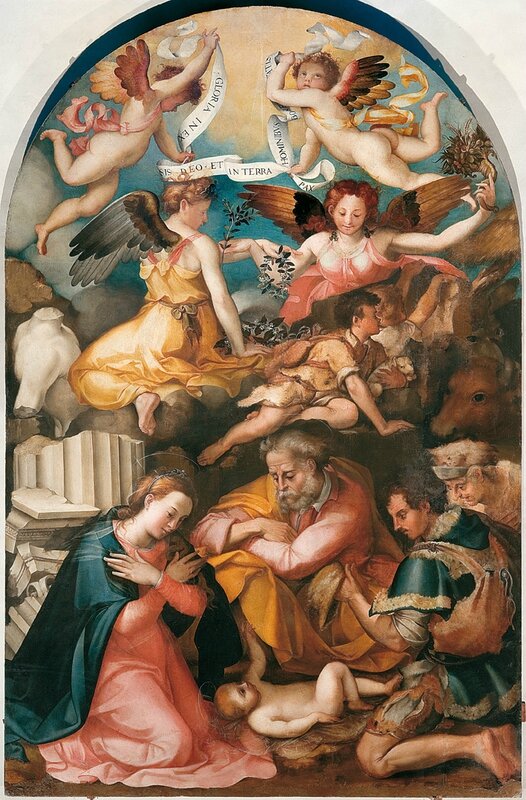 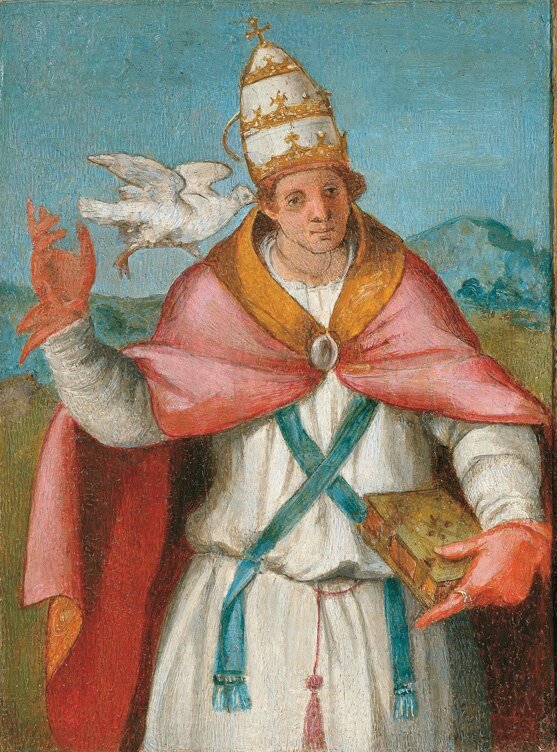