'Portrait Gallery of the Golden Age' at Hermitage Amsterdam

'Portrait Gallery of the Golden Age' at Hermitage Amsterdam

AMSTERDAM -  The exhibition Portrait Gallery of the Golden Age will open in Hermitage Amsterdam from 29 November 2014 until the end of 2016. The presentation features over thirty group portraits dating from the 17th and 18th centuries. These enormous paintings originate from the Amsterdam Museum and Rijksmuseum and are accompanied by other paintings and objects, including Rembrandt’s The Anatomy Lesson of Dr. Deijman. Together they illustrate the story of collective citizenship that typifies the Netherlands. These "brothers and sisters" of the Night Watch are unique in the world and rarely seen due to their size. Thanks to a special partnership between the Am-sterdam Museum, Rijksmuseum and Hermitage Amsterdam, these masterpieces will be visible to a large international audience.

The question of who these civic guards, regents and regentesses were and their achievements within 17th century urban culture forms the thread of the story. While the power in the rest of Europe lay in the hands of rulers and church officials, the Republic of the Seven United Netherlands was ruled by the bourgeoisie. By governing city and country, trading, taking on the city’s defence, stimulating sci-entific developments and setting up and managing the social safety net, the citizens ensured that the Republic became one of the most powerful and prosperous nations in Europe. The exhibition literally and figuratively gives a face to these influential men and women, particularly those from the city of Amsterdam, and makes it clear how the 17th century mentality led to manners and standards that can still be recognized in contemporary society.

Immediately upon entering the large ground floor hall in the Herenvleugel exhibition wing, visitors stand face to face with these influential citizens. The canvases - the largest of which measures ap-proximately 3 x 6 metres - are hung in two rows and guarantee a spectacular presentation. Regent group portraits
In addition to their efforts in the area of public order and safety, the wealthy upper-class city dwellers also took care of the administration of care and disciplinary institutions. In order to record their chari-table activities and good governance, these regents and regentesses often had themselves por-trayed at conference tables while engaged in their administrative tasks. Two fairly early regent portraits by Werner van den Valckert are currently being restored by the Rijksmuseum and will be on display for the first time in Portrait Gallery of the Golden Age. The paintings show that in 17th century Holland the board of a charity was by no means composed exclusively of men. The women who were also portrayed were even responsible for the daily running of the hostels. 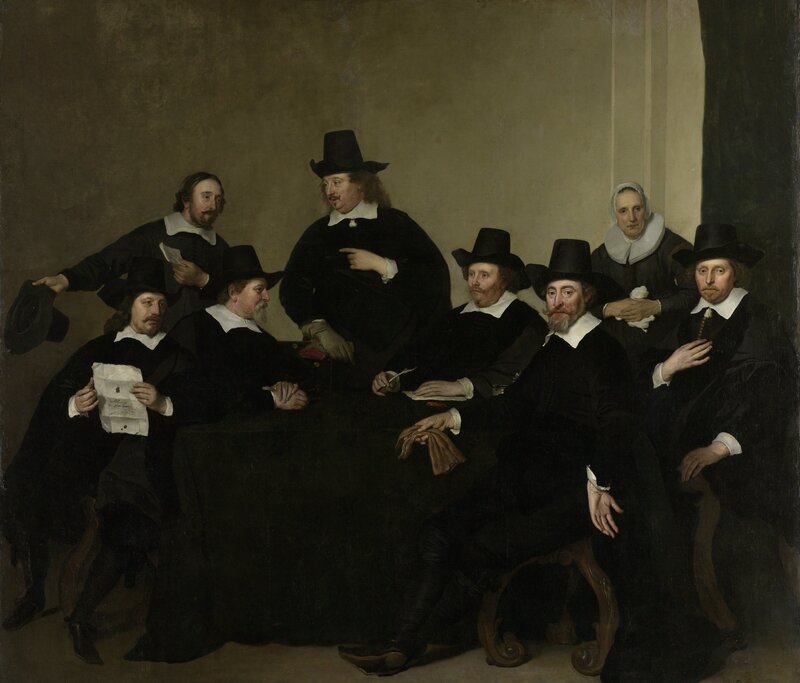 On the top floor, the exhibition delves more deeply into urban society and the background of Dutch group portraits in the Golden Age. Historical images are interspersed with audiovisual presentations, which include links to the present day. Typical Dutch cultural achievements such as egalitarianism, tolerance and liberty are explored in detail and Portrait Gallery of the Golden Age draws a parallel between the 17th century Republic and the Netherlands of today. A mirror is held up to Dutch visitors; for foreign visitors the exhibition offers an introduction to the Dutch mentality of the past and present. 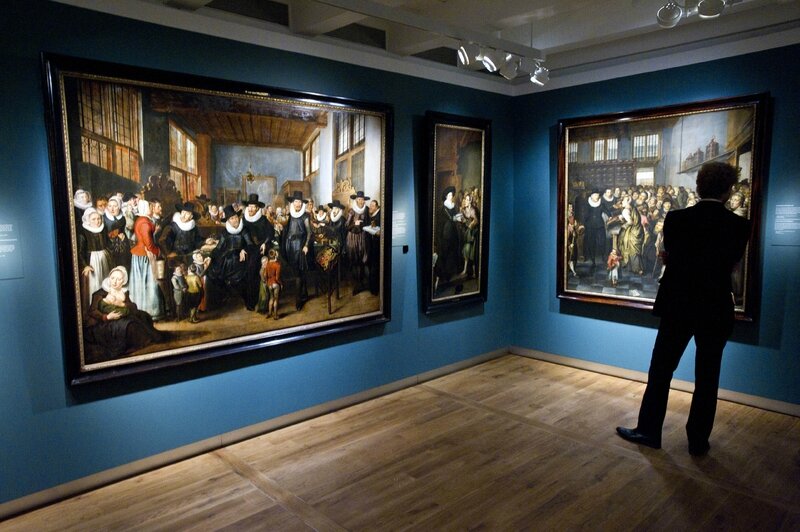 For a period of one year commencing on the 27th of February, the Portrait Gallery of the Golden Age exhibition will be enriched with a rare cityscape by Jacob van Ruisdael (1628-1682) from the Szépmüvészeti Múzeum (Museum of Fine Arts) in Budapest: View of the Binnenamstel in Amsterdam. The canvas shows Amsterdam in approximately 1655, shortly before Amstelhof was built, the property in which the Hermitage Amsterdam is currently situated. The painting is now back in the city where it was created, for the first time since 1800. With this temporary addition, visitors to the Portrait Gallery of the Golden Age can experience how the city looked around 350 years ago seen from the place where they will end up after their visit.

There are only a few known cityscapes by Jacob van Ruisdael. Usually, with this perhaps most "Dutch" landscape painter, the city would at best figure in the background, as in his views of Haarlem, Alkmaar, Egmond and Bentheim. Only in Amsterdam, where he is documented as being a resident from 1657, did he stray a few times within the city walls.

It has only recently been established properly and precisely which spot in which year is depicted on the painting. Curator of paintings, sketches and prints Norbert Middelkoop from the Amsterdam Museum described it last year in an entry for the catalogue on the occasion of the Rembrandt and the Dutch Golden Age exhibition in the Szépmüvészeti Múzeum in Budapest. Due to the temporary closure of this museum for renovations, the canvas can reside in the Portrait Gallery of the Golden Age for one year, where it will be given a special place amongst the other 17th century cityscapes.

Without the clearly recognisable Zuiderkerk that towers above the rooftops, the localisation of this cityscape would have been no easy task. We find ourselves slightly to the south-east of Amsterdam on a sandy path on the eastern bank of the Amstel. With the exception of the existing Zuiderkerk built in 1614 and to its right the spire of the Oude Kerk, the Blauwbrug is recognisable on the left. The construction on Vlooienburg is visible behind the bridge. This island was built up within the Amstel and has since been predominantly reserved for timber processing companies. To the far left a few houses are still visible on the Verwersgracht, at right angles to the Amstel.

Shortly after Ruisdael created his painting this cityscape changed completely. The sandy path and the bank were converted into a quay, the large Diaconieweeshuis (orphanage) was built on Vlooienburg and further towards the end of the 17th century part of the ring of canals on the east side of the Amstel was developed, including the construction of the Dicaonie Oude Vrouwenhuis (the current Hermitage Amsterdam building). In 2015 this view became dominated by the stone Blauwbrug (Blue Bridge) that replaced the old, wooden (blue!) bridge in 1883, and the Stopera (1986), which was built on what was formerly Vlooienburg. 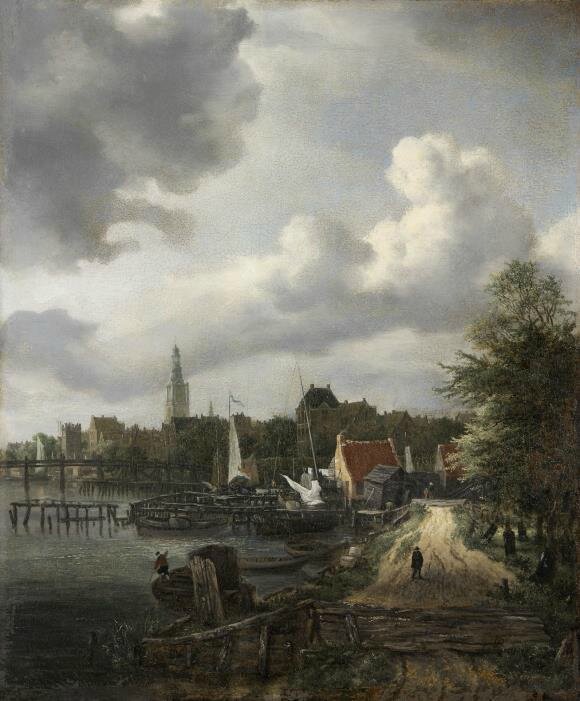