LONDON.- On 10 February, Sotheby’s London will offer for sale a painting that not only marks a pivotal moment in the career of Lucian Freud, but that also shines a spotlight on a fascinating but little-known moment in the artist’s life. While much has been written about many of Freud’s amorous liaisons, barely anything is known about his intense, and ultimately transformative, relationship with Bernadine Coverley. The two met when she was just 16, and he was already an established artist, 20 years her senior. Although their time together was relatively brief, it was to prove critical - marking both the beginnings of a life-long bond and, for Freud, a new approach to painting. Pregnant Girl embodies this new approach. Estimated £7-10m, the painting will be a highlight of Sotheby’s Contemporary Art Evening Auction in London on 10 February 2016.

Oliver Barker, Sotheby’s Senior International Specialist, Contemporary Art: “This astonishingly beautiful painting embodies the profound bond between Lucian and the mother of his two daughters. There is arguably no other portrait by Freud that is more gripping, more tender, and more laden with such emotional depth.”

In Pregnant Girl we see Freud paint his lover reclining on the green sofa in the long and narrow room in his studio in Delamere Terrace, West London. The sleeping 17-­‐year old -­‐ head titled to one side, eyes shut, dreaming -­‐ does not confront the viewer, or the artist; rather we confront her at an intensely private moment. In creating a modern ‘Madonna and Child’ or ‘Sleeping Venus’, Freud echoes the greats of art history, to deliver a breathtaking image of beauty, desire, femininity and fertility. Coverley, whose Irish Catholic parents ran the Black Horse pub in Brixton, was sent to a convent boarding school at the age of four. Feeling trapped and despondent under the strict governance of the convent, she twice tried to run away. By her teens, she craved the liberation and excitement of bohemian Soho – an intoxicating underground world of artists, musicians and writers. It was here, in a Soho pub in 1959, where Coverley first met Freud, who was captivated by her natural beauty and free spirit.

Much has been written about Freud’s famously numerous partners - when he first met Coverley, he had already been twice married and had fathered a number of children – but little is known about their relationship. Pregnant Girl opens a window onto the most meaningful moment in the lives of both lovers, embodying the singular tenderness he felt for Bernadine, soon to be the mother of his daughters Bella and Esther. “It must have been a very happy time in her life, being pregnant with the man she loved and him wanting her to be there and paint her”, says their daughter Bella, “I think he was undoubtedly the love of her life.”

After separating from Freud, Coverley left England (and its conservative views on unmarried mothers) with her two small daughters to start a new life in Morocco. The story of their bohemian lifestyle in Marrakesh was immortalised in Esther’s novel “Hideous Kinky”, and later turned into a hit film with Coverley played by Kate Winslet.

Although he was not altogether present in Bella and Esther’s early years, Freud was extremely close with his two daughters, painting both of them several times, including Baby on a Green Sofa (1961), a painting of Bella as a baby resting on the same green sofa in which her mother was portrayed. Remarkably, after two extraordinary lives, Freud and Coverley died within just four days of each other in July 2011. 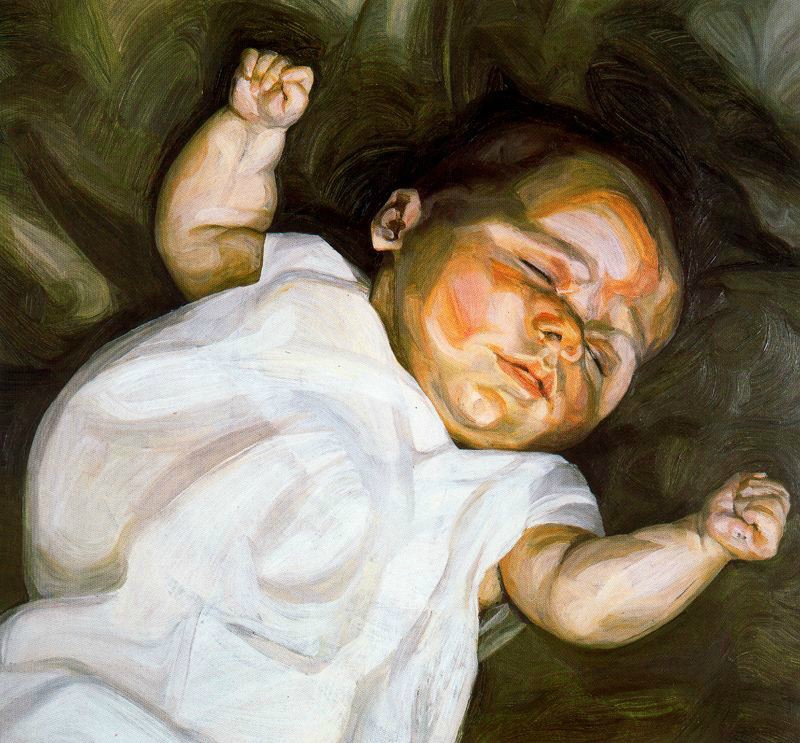 Defining Work
A defining work in Freud’s oeuvre, Pregnant Girl has been presented at every major point of Freud’s exhibition history, from his first major retrospective at the Hayward Gallery, London (1974), to the recent major shows at Tate, London (2003) the National Portrait Gallery, London (2012) and the Kunsthistoriches in Vienna (2013-­‐14), where it was hung alongside Baby on a Green Sofa.

When it was painted in 1961, the highly expressive work represented radical departure from the artist’s realist style of the 1950s. Freud has captured the delicate poise of her turned head, sumptuous curves of her body and thick dark hair, through a virtuosity of looping, arching brush-­‐strokes, to deliver a painting full of impulse, fullness of form and exacting honesty. Pregnant Girl exemplifies the artist’s contribution to the grand tradition of the nude and the notion of fertility in Western art. 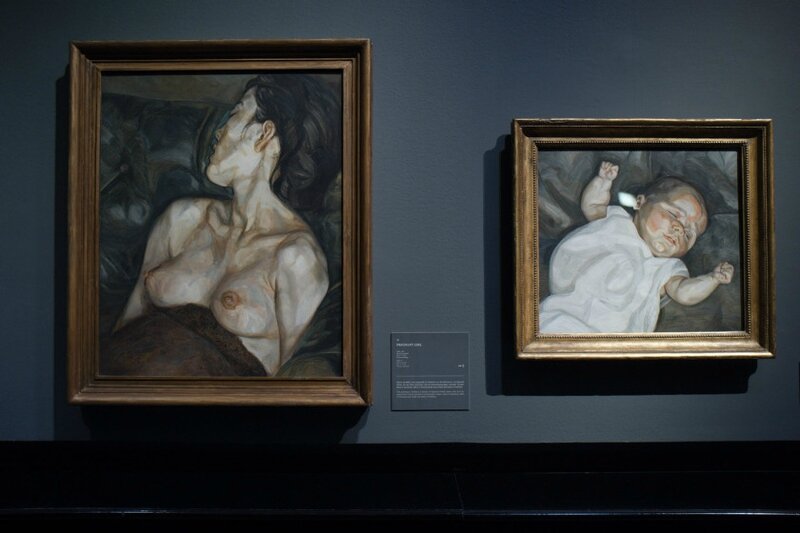 Kunsthistoriches in Vienna (2013-­‐14). Left: Pregnant girl (1960-61), of his lover, Bernardine Coverley, who was carrying their first daughter, Bella Right: Baby on a green sofa (1961), a tender portrait of little Bella, who is probably the youngest person Freud ever painted. (photo courtesy angelinahue.com)