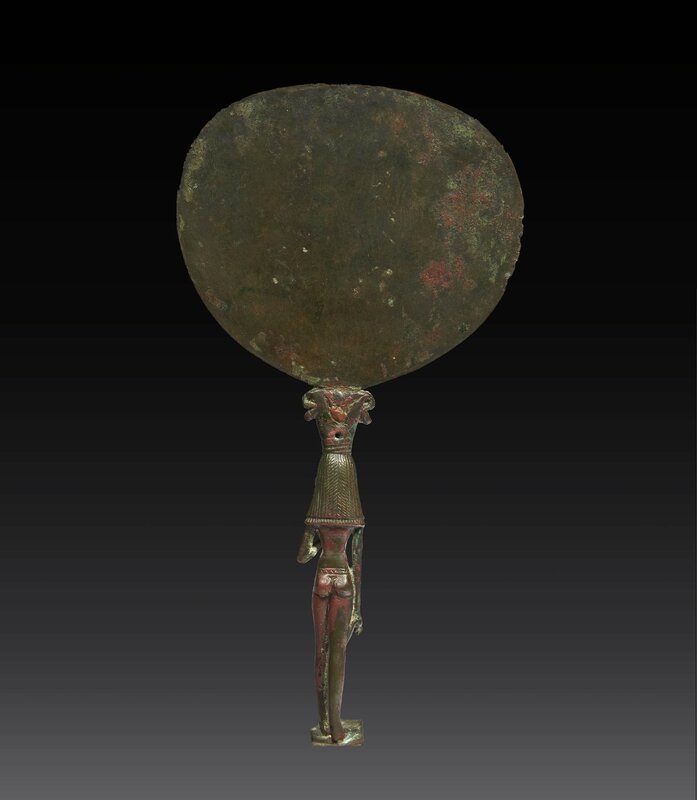 The handle in the form of a nude female, standing on a thin, integral, rectangular plinth with her left leg advanced, her right arm lowered, holding an attribute, perhaps a bolt of cloth, her left arm bent at the elbow, holding a globular offering in the palm of her hand below her breasts, adorned with a thin waistband with incised zigzag, a broad collar, disk earrings and an enormous enveloping wig with hatched tresses, their ends twisted, a lotus flower above her forehead, her moon face with modeled brows, narrow eyes, a small broad nose and a smiling mouth, with a separately-cast cordiform disk held in place by a now-missing pin through the large lotiform element surmounting her head

The Cybele Gallery in Paris was founded by Jean-Pierre Montesino in 1988. It offers a wide choice of antiques from the Mediterranean and specializes in objects from Ancient Egypt. Jean-Pierre Montesino is a recognized expert of the European Chamber of Expert-Advisors in Fine Art and a member of the International Association of Dealers in Ancient Art (IADAA).
Cybele is proud to have contributed in enriching the collections of private collectors and also Museums like the Louvre, the Metropolitan Museum, Boston Museum of Fine Arts and various international Museums.