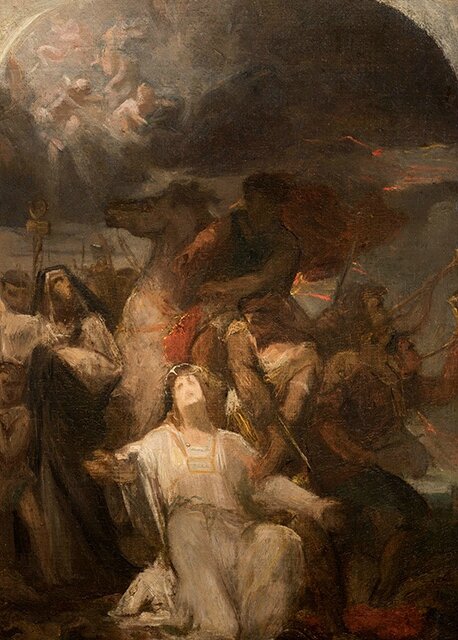 WILLIAMSTOWN, MASS.- The Clark Art Institute has received a long-term loan of a magnificent oil study by Eugène Delacroix (French, 1798–1863). The study, The Martyrdom of Saint Sulpicius (c. 1847–50), is relatively unknown, having only been exhibited once in 1930. The painting shows Saint Sulpicius kneeling with arms outstretched as his executioner wields his sword. The Roman captain who ordered the execution is depicted on horseback, while a veiled standing figure depicts Saint Domitilla, whose prayers had led Sulpicius to convert to Christianity. The only known published reference to the study appeared in The Adolph Lewisohn Collection of Modern French Paintings and Sculptures (1928), a limited edition catalogue published by the Lewisohn family. While the canvas exhibits all of the dramatic, loose brushwork and vibrant color characteristic of Delacroix, the exact origin of the study remains the subject of ongoing research at the Clark. The painting will be on view beginning February 9, 2016.

“One of the great things about being a curator is having the opportunity to encounter and study works of art that haven’t been widely known or exhibited to the public, and in turn to be able to share this knowledge with a larger audience. Delacroix’s The Martyrdom of Saint Sulpicius is one of those wonderful opportunities. There is a great deal to be learned and shared about a work like this that is quite exciting, and gives you the sense that you are unraveling a mystery of sorts,” said Lara Yeager-Crasselt, the Clark’s interim curator of paintings and sculpture. “Art history is often thought of as being a static discipline—learning the dates of paintings and recognizing artists—but it is extraordinary in the way that it remains a living, breathing discipline that engages the objects themselves as much as the historical and cultural contexts that shaped them, in their own time and in their history thereafter. There are always challenges inherent in that pursuit and this painting is a wonderful example of that kind of challenge.”

For the past several months, members of the Clark curatorial team have been researching the study to determine its place in Delacroix’s oeuvre. To date no extant painting relating to the study has been located, but it is believed that it may have been a preparatory work for Delacroix’s last major commission, the murals in the Chapelle des Saints-Anges at Saint-Sulpice in Paris. However, St. Sulpicius is not represented in the Saint-Sulpice murals, and it appears Delacroix does not refer to him as a possible subject in his journals or correspondence from the period.

The commission was fraught with problems and its execution was delayed by numerous administrative setbacks, programmatic revisions, and technical challenges. Delacroix’s correspondence and journals indicate that the subject matter of the murals was changed many times from 1840 when the commission was first discussed to 1847 when it was begun, and 1861 when the murals were completed. It is therefore quite conceivable that in the early stage of planning the commission, Delacroix considered the martyrdom of Saint Sulpicius as a potential subject.

The work also relates to Delacroix’s artistic interests from the period, including his admiration for the seventeenth-century Flemish artist Peter Paul Rubens. In his journals and correspondence from the 1840s and 1850s, Delacroix expressed interest in the “beautiful exaggeration of the horses and the men of Rubens.” He painted two versions of Emperor Trajan’s Justice, one in 1840 and the second in 1858. In both, the emperor rides a rearing horse positioned similarly to that beneath the Roman captain in The Martyrdom of Saint Sulpicius. Both paintings attest to Delacroix’s interest in the reign of Trajan (A.D. 98-117) – significantly, the period in which St. Sulpicius was martyred.

The shape of the study is likely one of the strongest connections between The Martyrdom of Saint Sulpicius and the Chapelle des Saints-Anges. Like the paintings on the east and west walls of the Chapelle des Saints-Anges, the oil study is a vertical rectangle with an arched top. Outside of preparatory works for the Saint-Sulpice commission, this is an unusual shape among Delacroix’s paintings and drawings.

Whatever its original intentions, the oil study is a beautiful example of Delacroix’s vigorous and confident handling of paint and color, and of the effects of light and shadow. The work is an excellent example of his creative process and brushwork, his sensitivity to the use of accents of color, and ultimately his ability to create a powerful and emotionally charged scene of martyrdom.