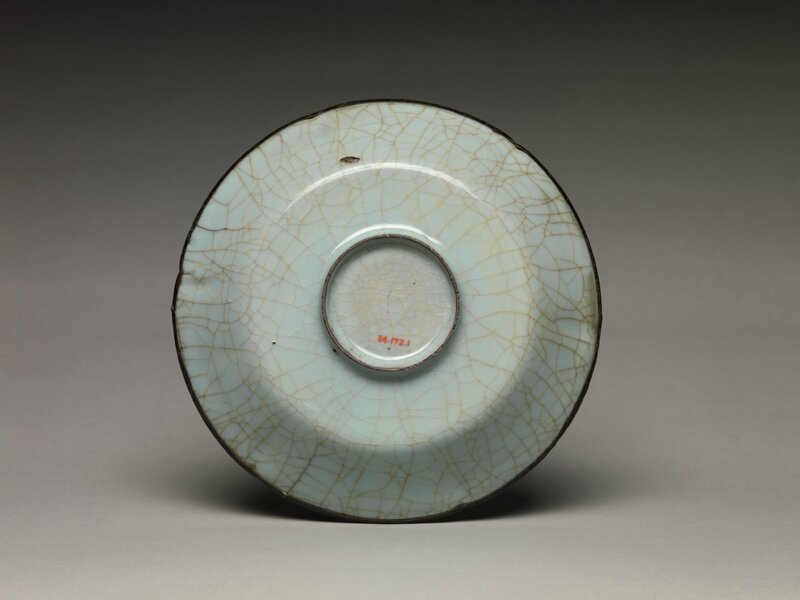 The cracks on this dish, made to resemble the accidental cracks that sometimes occurred during the firing of ceramics, are deliberate. The piece is an example of ceramics produced in south China near the Southern Song capital of Hangzhou to re-create imperial wares produced earlier in the north: delicate cracks, sometimes known as crazing, are one of the hallmarks of the famed, and rare, Ru ware produced for the Northern Song court.

The outstanding feature of a family of ceramics known as Guan ("official") ware is a deep, rich glaze that reflects the Song delight in the soft colors of nature. The remarkable quality of the Guan glaze was achieved by applying it in many coats; this can be seen at the foot of this superb Guan dish, where the effect of the layering has been compared with the lines left on the shore by the receding tide. This dish is the embodiment of the sense of serenity that is the hallmark of Song pottery. Its glaze, which resembles the pale grayish blue of polished marble, can be fully appreciated only by running one's fingers over the surface. Guan wares were produced for the court in at least two groups of kilns in Hangzhou, Zhejiang Province, after the Southern Song capital was firmly established there.