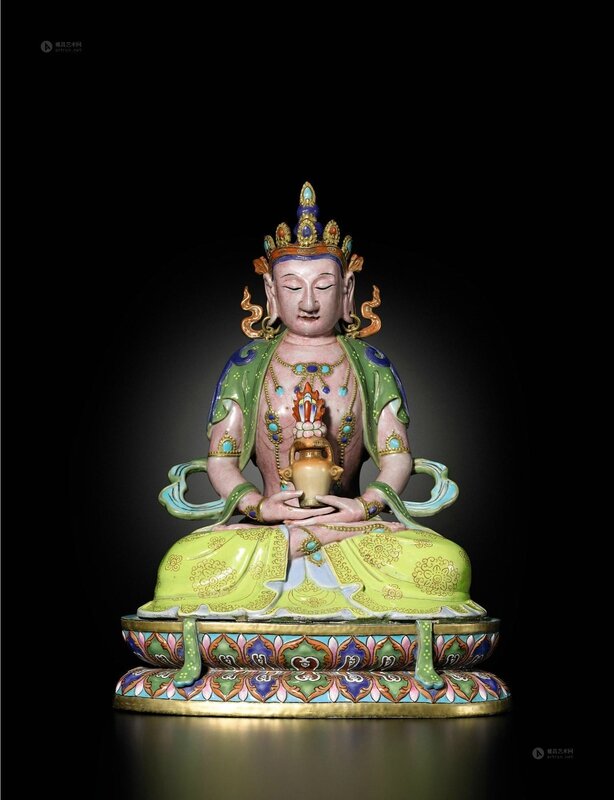 seated in dhyanasana on a triangular waisted lotus pedestal with hands held in dhyanamudra supporting a vase with a cintamani emblem, the face and body applied with a powdered pink enamel, the deity with serene facial expression and lowered eyes, the hair enamelled blue and partially falling over the shoulders, the rest swept into a high topknot and secured by an ornamental jewel worn behind the five-leaf crown, further adorned with jewelled necklaces, armbands, bracelets, anklets and foot accessories, the shoulders draped with a billowing olive-green shawl wrapped around the lower arms, the dhoti with an outer layer decorated with gilt floral scrolls on an iron-red ground covering the back, revealing the bright yellow inner layer with floral roundels, the pedestal enamelled in multicolour with two tiers of stylised lotus petals alternately in lime-green and blue on a turquoise ground, with the tips of the scarf falling over the front, the countersunk base with a cache - 29.5 cm., 11 5/8  in.

Notes: While a small number of famille-rose figures of Avalokitesvara are known in museums and private collection around the world, the present example is especially fine for its detailed and well preserved enamelling and most naturalistic sculptural depiction. Avalokitesvara is known as the 'Protector of the World' and is the subject of the twenty-fourth chapter of the Lotus Sutrain which he is described as one who looks in all directions in order to save all beings from suffering. He communicates with the Buddha Amitabha and legends claim that he was born from a ray of light emanating from the right eye of Amitabha. While in some cultures Avalokitesvara is worshipped as a male bodhisattva, in China he has taken on a more feminine character and physique. An avid follower of Tibetan Buddhism, the Qianlong Emperor associated this compassionate saviour with the Tibetan spiritual leaders including the Dalai Lamas who were believed to be Avalokitesvara in human form.

The adoration of brightly coloured deities has a very long tradition in Tibetan Buddhism and the wide colour range available in the famille-rose palette made porcelain an ideal medium to create such Buddhist figures. However, the making of such figures required the highest level of workmanship due to the complicated modelling and repeated firing necessary to achieve the perfect result. Hence the number of figures produced remained small and were mainly for the temples of the imperial palace precincts.

The present figure is unusual for the colouration of the body which has been painted with a flesh-like powdered pink enamel. More common are those that are brightly gilded to simulate gilt-bronze figures of Avalokitesvara that were popular at the time. A figure of related model said to have come from the Imperial Palace, was included in the Exhibition of Chinese Arts, Messrs. C.T. Loo & Co., New York, 1941, cat. no. 750. Another gilded version was sold in our London rooms, 13th November 2002, lot 156A; and further two in our Hong Kong rooms 15th May 1990, lot 245 and 29th October 2002, lot 606. Smaller and less elaborately decorated versions of these famille-rose figures are also known; see a pair illustrated in Qingdai ciqi shangjian, Hong Kong, 1994, pl. 232.

A famille-rose figure of the Bodhisattva Green Tara, who represents all of the miracles of the Buddha of the Past, Present and Future, sold in our London rooms, 12th November 2003, lot 259, is worth comparing with the present example. While the Green Tara is depicted seated with her right leg extended forward and her body covered in green enamel, her facial expression is almost identical to this piece suggesting that the two figures were made by the same artist.  See also a figure of White Tara, her body painted white, also most probably the product of the same workshop, sold at Christie's New York, 18th September 2003, lot 371.