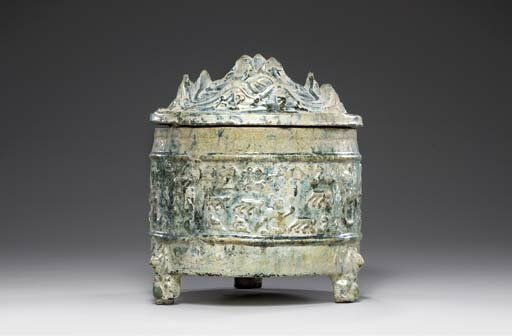 The vessel raised on three kneeling bear supports and molded around the sides with archers on horseback, immortals (xian), and various animals including monkeys, tigers, deer and boars, as well as a pair of mask and ring handles, the cover molded in high relief with concentric mountains interspersed with further animals and a large kneeling immortal, the green glaze extensively degraded to a silvery iridescence - 9¼in. (23.5cm.) high - Lot 193. Estimate $7,000 - $9,000. Price Realized $5,975

Notes: A number of comparable covered vessels of this type have been published, but the present example is distinguished by an unusually crip molding and striking iridescent glaze. This type of vessel was made for burial in the Han dynasty. The cylindrical shape with feet derives from that of a bronze vessel. The cover in the shape of a conical mountain is like that of bronze incense burners of the time; the central group of peaks surrounded by lower peaks have a cosmic symbolism referring to the 'five sacred mountains'. In the mountains, the intermediary region between heaven and earth, wild animals, mythical creatures and immortals can all be found. These are depicted among the high and low peaks on the cover. A similar example can be found in the Cincinnati Art Museum illustrated in E. Avril, Chinese Art in the Cincinatti Art Museum, Cincinnati, 1997, p. 139, fig. 51.