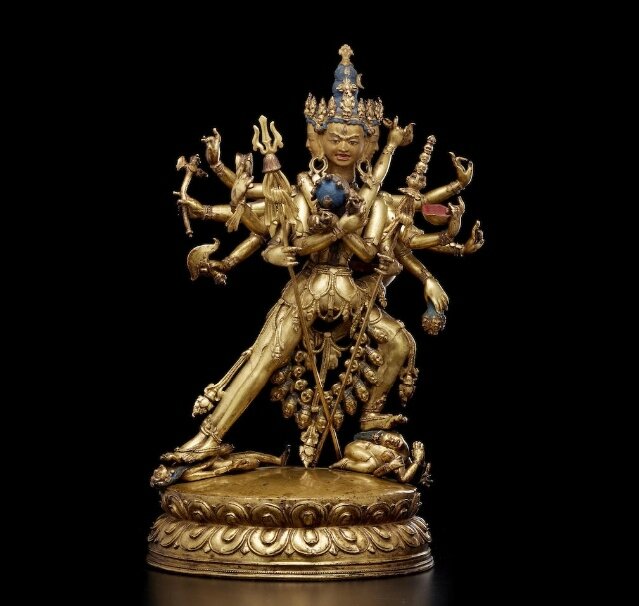 Masterfully cast, the deities in yab-yum with Chakrasamvara striding in alidhasana on prostrate figures, his twelve arms creatively angled holding various ritual implements, Vajravarahi wrapping her right leg around his waist while gazing into his primary face, their eyes finely delineated in black and red. 15 in. (38 cm) high

'The distinction between wisdom and compassion is like that of a lamp and its light. These two are of one undivided essence. They appear in the form of one mind; it is caused by the union of wisdom and skillful means, and it realizes the complete enlightenment....This is the consciousness of Chakrasamvara and Vajravarahi.'
--(after Huntington & Bangdel, Circle of Bliss, Columbus, 2003, p. 236)

Through its beauty, complexity, and energy, this superb example of Tibetan sculpture expresses one of the most important transcendental ideals in Buddhist art – the supreme bliss of enlightenment attained through the perfect union of wisdom and compassion (skillful means).

The male deity, Chakrasamvara, represents Buddha-like compassion. The female deity, Vajravarahi, embodies Buddha-like wisdom. They are depicted here in ecstatic embrace. He cradles her in his primary arms, producing vajrahumkara mudra by crossing the vajra and ghanta in his hands, symbolizing that wisdom and compassion have dissolved into one perfect interpenetrative union. They stand upon prone and contorted human figures on a large circular lotus platform.

Gilt bronze figures of Chakrasamvara demanded the best craftsmen in order to produce complex images that could both express and inspire the most exquisite state of mind. Chakrasamvara features prominently across all Tibetan Buddhist schools, and is the principal transformative deity of both Kagyu and Sakya lineages. The Phagdru Kagyu sect installed Chakrasamvara as the principal deity of Drigung monastery in Lhasa (founded 1179). Chakrasamvara is also key for the Newars of Nepal, who perceived the entire Kathmandu valley as his mandala (celestial abode). They were the master painters and sculptors who produced superlative works for Tibetan patrons, such as the Sakyas at Ngor monastery (founded 1429).

Rising to great prominence in the 14th-16th centuries, the Kagyu and Sakya orders formed strong ties with the imperial Yuan and Ming courts, and Tibetan Buddhist iconography strongly informed Buddhist art of the early Ming period. Images of Chakrasamvara proliferated during this exchange, as evidenced by a spectacular Yongle mark and period example (r. 1402-1424) sold at Sotheby's, Hong Kong, 7 October 2007, lot 810. Later, the Qianlong Emperor (r. 1735-1796) became an initiate of the Chakrasamvara Tantra and designed the Pulesi temple at Chengde as a Chakrasamvara mandala.