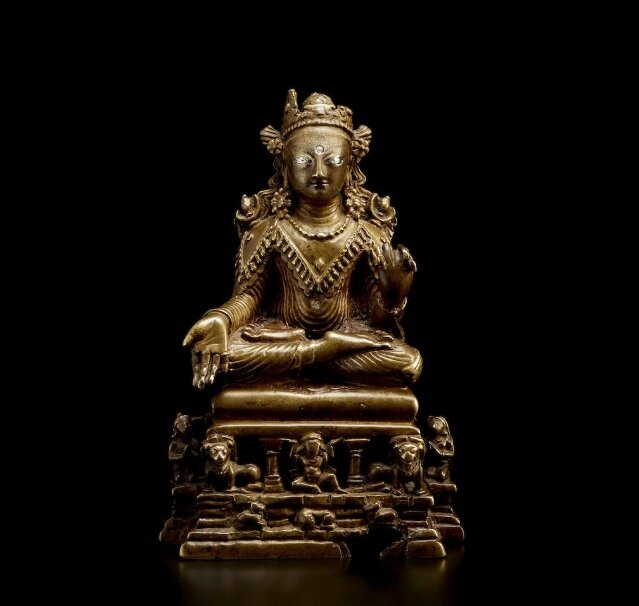 His right hand in varada mudra with ring on the little figure, his left upraised holding the hem of his pleated robe, his crowned head with copper inlaid lips and brilliant silver inlaid eyes. 7 1/4 in. (18.41 cm) high

This charismatic, heavily published, bronze seats the Buddha on a molded cushion supported by a yaksha, two lions, and four throne legs that rest upon a brick-like plinth with a recumbent animals, and male and female donor figures with upturned gazes and hands in obeisance towards him.

The inspiration for his tasseled mantle can be traced back as far as 3rd-century Sassanian Transoxania by route of a Gandharan fragment published in Kurita, Gandara bijutsu, Vol. II, Tokyo, 1988, p. 291, fig. 4, and also in Harle & Bautze-Picron (eds.), Makaranda: Essays in Honour of Dr. James C. Harle, Delhi, 1990, p. 58, fig. 14. The so-called princely figure wears a strikingly similar four-cornered cape populated with a crescent moon and stars. Harle argues it as evidence for cultural exchange between the Sassanian Empire (224-651 CE) and the Ancient region of Gandhara (ibid., p. 58), '...the star-and-crescent motif [is] observed for the first time on a helmet of the Sasanian King Ardashir I [r. 224-241].'

Now, in the inherited regions of Kashmir, circa 8th century, the crescent moon and star appear to have transitioned to either side of this Buddha's shoulders. A similar placement is found on the famed Rockefeller Kashmiri Buddha at the Asia Society, New York (Linrothe, Collecting Paradise, New York, 2004, p. 60, fig. 1.28), and on another the Pritzker Collection (Siudmak, 'The Hindu-Buddhist Sculpture of Ancient Kashmir and its Influences', in Handbook of Oriental Studies, Vol. 28, Leiden, 2013, p. 320, pl. 146). However, in the Rockefeller example they appear as cupped rosettes above the shoulders, whereas in the Pritzker example they appear as finials above stupas. Linrothe suggests that the star has now been reinterpreted as the moon, 'The disks apparently indicate the sun and the moon and are to be thought of as effulgences of light' (op. cit., p. 56).

Exhibited: Arts from the Roof of Asia, The Metropolitan Museum of Art, New York, 1971.