A painting of Chakrasamvara and Vajravarahi, Nepal, dated 1513

A painting of Chakrasamvara and Vajravarahi, Nepal, dated 1513 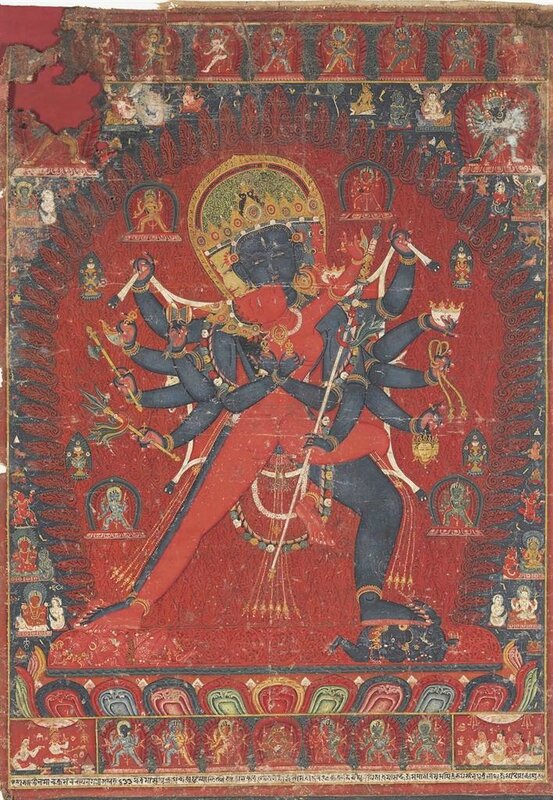 The blue-skinned Chakrasamvara with four faces striding in alidhasana over two prone figures on a lotus base backed by a flaming mandala, his principal arms holding a vajra and bell and wrapped around Vajravarahi, with various implements in his ten radiating arms and wearing a tiger skin and several garlands, she holding a curved knife aloft and wearing a bone apron, surrounded by lineage and protector deities, with donors in the bottom and an inscription below; 38 1/8 x 26 in. (97 x 66 cm.)

Notes: The worship of the Buddhist deity Chakrasamvara, which translates as Wheel of Bliss, began in Eastern India in the 9th and 10th centuries as part of the Anuttarayoga Wisdom (mother) classification of Vajrayana Buddhist Tradition. Many scholars contend that Samvara arises out of a pre-Buddhist deity, as the presence of a third eye and the crescent moon in his hair, as well as his accoutrements, including a trident, damaru, outstretched elephant skin and the head of Brahma, are all associated with the god Shiva. One of the most popular deities in Himalayan Tantric Buddhism, Chakrasamvara can appear in several dozen different forms, from simple to complex, peaceful to wrathful. Therefore, it is necessary to rely on the descriptive literature in the Sanskrit and Tibetan languages to differentiate between the forms. Adding to the complexity, there are more than fifty different traditions of these forms in Tibetan Buddhism. They are meant to emphasize different types of meditation practice that are suited for specific types of emotional and psychological characteristics in the tantric practitioners who take on these intricate practices.
Chakrasamvara, who is blue in color, has four faces and twelve hands. The color of his faces are specific to the Krishnacharya tradition: the main face is blue, proper right face is white, proper left face is red, and the back face is yellow. He holds a vajra and bell at center, then clockwise from top right: outstretched elephant skin, skullcup, golden lasso, the four-faced head of Brahma, a khatvanga (held in the crook of his left arms), and on the left, the elephant skin again, curved knife, axe, trident, and damaru (drum) against his right upper arm.
Both he and Vahravarai wear golden crowns, and trample red Kalaratri and black Yama on the base, and are surrounded by the blazing flames of pristine awareness. Within the flames are the four directional yoginis – starting at upper left and clockwise, Rupini (yellow, indicating south), Khandarohe (red for west), Lama (green for north) and Dakini (blue for east) – with their matching vases of elixir. Immediately outside the flames, against the dark blue-black background, are the eight cemeteries, with Kalachakra at upper left and Hevajra at upper right. Finally, the top and bottom registers include retinue figures, with Manjushri at center bottom and Vajracharya at far left. The donors are in the lower right corner.

Commentaires sur A painting of Chakrasamvara and Vajravarahi, Nepal, dated 1513