NEW YORK, NY.- Sculpture from China’s Northern Dynasties dating from 386 to 577 A.D. will be the subject of the Asian art show at Throckmorton Fine Art from March 3 to April 23 at its New York gallery at 145 East 57th Street.

According to gallery founder Spencer Throckmorton, “The focus of our 2016 Asian exhibition will be on sculpture from China’s Northern Dynasties including Northern Wei, Eastern Wei and Northern Qi examples, with an emphasis on artworks dating to the sixth century A.D. A detailed catalog will accompany the exhibition.

“The nearly two hundred year period surrounding the sixth century was a particularly rich period of artistic production of Buddhist sculpture as Buddhism was adopted at the highest levels of Chinese society, and richly patronized by the Imperial courts of the successive dynasties. The quality and beauty of these examples can serve to illustrate the high artistic level of the sculpture of this era, and its development over this period.

“This will be the fifth exhibition of Chinese Buddhist sculpture we have staged since 2007, each time working in concert with leading scholars and experts on the subject. We are fortunate to have had Dr. Chang Qing to write the catalog text, and we benefit from the contributions of Dr. Elizabeth Childs Johnson, who has provided counsel on many of our exhibitions. I would also like to also thank Norberto Rivera for the design, Kraige Block for display, support and planning, and Oren Echaus and Henrick Smiliger for photography.

“In the Northern Qi kingdom, roughly modern day Shandong province in China, there were reputedly some 40,000 Buddhist temples, monasteries and establishments, and some one million clergy, both monks and nuns, attending to them. This led to enormous production of sculpture. As a result of the tremendous success and resultant wealth of these Buddhist establishments periodic anti-Buddhist pogroms by Confucian-leaning emperors were staged, which by the late Tang period, 850 A.D., lent a blow to Buddhism from which the religion never really recovered.

Buddhism originated in India in the 6th Century B.C., when a prince of the Shakyamuni clan, through spiritual searching, found enlightenment while meditating under the famous Bodhi tree. Scholars say Buddhism entered China in the 2nd Century A.D. during the Eastern Han Dynasty. One story about the Emperor Ming, 58 - 75 A.D., has him in a dream where he saw a god ‘whose body shown like the sun who flew by his palace.’ He asked his officials what god this could be, and one of the scholars told the emperor that he had heard of a holy man in India who had attained the Tao, and who was called Buddha, who flies through the air and shines like the sun. So the emperor sent emissaries to India to learn about the Buddha, which started the exchange between the two cultural regions and Buddhism’s spread to China.

“However it wasn’t until the Northern Wei, beginning in 386 A.D. that we start to see sculptural production, with almost all surviving examples dating to after the anti-Buddhist pogrom of 460 A.D. The Northern Wei sculptures have an archaic feel, with a smiling countenance, and full voluminous robes that fall in complicated and highly stylized folds down the body. The Northern Qi sculptures are very Indianized and elegant with minimal robes that cling to the body and reveal the forms of it. The faces follow the Indian Gupta prototypes closely with the curving eyelids barely open, cupid bow lips and strongly arched brows. The hair also follows the Gupta prototypes, with snail shell curls, sometimes simplified to incised spiral bumps or simple raised bumps, covering the head and ushnisha. During the Northern Qi, the ushnisha merges into the form of the head and is apparent as an elongation of the skull rather than the defined raised protuberance of the Northern Wei and later following Tang Dynasty.

“Buddhism developed from an austere form focused on the individuals efforts through meditation to achieve personal salvation and enlightenment, to a more inclusive popular religion featuring a rich panoply of Bodhisattvas who functioned much as saints in the Catholic religion, who could intercede and assist the individual in their lives and towards enlightenment.

“Images of the Buddha and Bodhisattvas became central to the religious worship, as they were believed to have been created by merit and could convey merit simply by the worshiper contemplating them. The patrons and imperial families and individuals who commissioned the sculptures, and funded the shrines, temples and monasteries where they were placed, gained merit through such generosity. We are fortunate to be able to enjoy this abundance of imagery today through the survival of the sculptures on display here.”

Featured Northern Wei artworks include a Standing Buddha from the Northern Wei period 386-534 made of marble with gilt and polychrome and standing over 28 inches in height. Throckmorton says, “The elegant, softly modeled elongated face appears benevolent in a smiling expression with the Buddha looking at his followers as he preaches Buddhist philosophy. The style of his face exhibits ‘xiugu qingxiang,’ literally ‘elegant bones and pure form.’ The figure represents the metaphysical concepts and search for a leisurely, transcendental spirit common among officials, the literati and those of refined taste in the society during the fourth to sixth centuries in China, which was given direct expression in the Buddhist arts.

“Also of the Northern Wei period is a c500-534 Head of Bodhisattva in Limestone with an elongated oval-shaped face and benevolent expression, a big shift from Indian to Chinese style. The figure wears a three-plaqued crown, common to the sixth century, whose special lotus flowers decoration above the three plaques is only seen in some early sixth century Maitreya Bodhisattva sculptures carved on the walls of Guyang Cave of Longmen Cave Temples in Luoyang, Henan Province. Maitreya Bodhisattva became the future Buddha. A third Northern Wei figure on view is a Torso of a Buddha ca 500-534 also in Limestone. It originally belonged to a seated or standing Buddha and examples with similar heads can be seen in the Northern Wei caves of Gongxian Cave Temples in Gongyi of Henan, the Ruins of Xingguo Monastery of Boxing County, and the archeological finds from Longxing Monastery in Qingzhou of Shandong province. One can still see the relief carvings of lotus in the center of his halo.” Many of the sculptures in the Throckmorton Northern Dynasties show date to the Northern Qi period 550-577 CE. One highlight is a marble Head of Bodhisattva wearing a jeweled three-plaqued crown with two ribbons hanging from the sides with charming naturalistic carvings. “This female form face was influenced by Indian Gupta 320-550 CE style Bodhisattva figures and represented a big stylistic shift from the Northern Wei period, which had been influenced by traditional Han-Chinese culture to Xianbei, a nomadic people from Northeast China. There is a high level of workmanship. Also from the Northern Qi is a double Guanyin Bodhisattva Figure Stele made of marble with a pair of standing figures. “They depict a typical style of Bodhisattva images from the Northern Qi period, with Indian influence. Each of the Guanyin figures steps a lotus pedestal, symbolizing the purity of Buddhism.” A third Northern Qi figure on display at Throckmorton is a Seated Guanyin Bodhisattva made of marble depicting ornamentation and costumes of the late Northern Wei period but with an Indian influence. His left hand holds a mani pearl, a wish-fulfilling jewel in Buddhism. From the Northern Zhou period 557-581 CE Throckmorton is showing a Seated Maitreya Bodhisattva with an oval plump face and columnar style plump body sitting on a throne in European posture with his feet on two lotus flowers. This represents the Maitreya, the future Buddha. According to Buddhism Maitreya’s future Kingdom will be joyful and happy. A Bodhisattva wearing a long scarf and long string of jewelry is an old tradition from Northern Wei but the complicated configuration of the jewelry seen on this figure was an alteration of Northern Zhou artists. Some similar Maitreya Bodhisattvas can be seen in the Northern Zhou or Sui 581-618 or Tang period Buddhist sites including the cliff image site in Yao County of Shaanxi Province.

Spencer Throckmorton adds that, “We are fortunate to have been able to acquire such important artworks from this significant period in China. We hope to see many collectors and museum officials visit the exhibition." 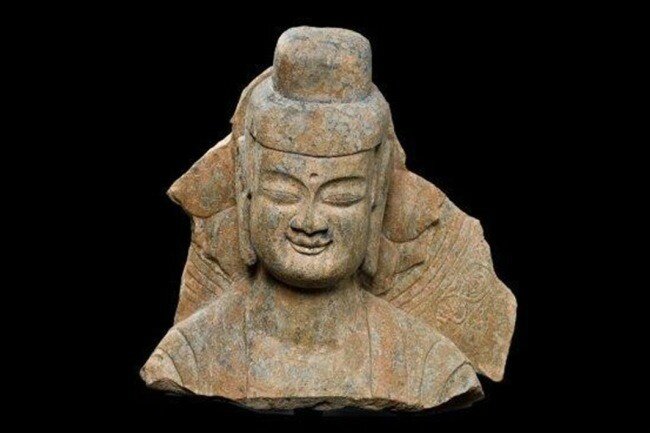