Formerly on loan to the Brooklyn Museum, this Fine Sedimentary Stone Stele Depicting Scenes from the Life of Buddha hails from 11/12th Century Eastern India (estimate $100/150,000). Part of a small group of miniature sculptures carved during the Pala period, these steles served as a memento for pilgrims making their way from Eastern India to Tibet and Burma. This shrine beautifully depicts Buddha’s triumph over Mara while seated beneath the Bodhi tree in Bodh Gaya. The Buddha reflects the stylistics traits associated with the image of Buddha in the Mahabodhi temple at Bodh Gaya. Note: This exquisite stele is one of a small group of miniature sculptures carved during the Pala period (8th-12th Century) in eastern India. A number have been found in Tibetan and Burmese monastery collections indicating that they were probably made in part as pilgrims’ sacred mementos.

These shrines were originally thought to be Burmese but recent research has confirmed their origin as eastern India, see Hiram W. Woodward, “The Indian Roots of the ‘Burmese’ Life-of-the-Buddha Plaques”, Silk Road Art and Archaeology 5, 1997-98, pp. 395-407; and Steven Kossak’s seminal article “A Group of Miniature Pala Stelae from Bengal”, Orientations, July/August 1998, pp. 19-27 which firmly established the Indian provenance of the group.

The central figure of Buddha portrays the moment at which he triumphs over Mara just prior to his enlightenment: this momentous episode took place while seated beneath the bodhi tree at the vajrasana site in Bodh Gaya. In common with the majority of similar miniature stone stelae, the Buddha is depicted with a noticeably short neck, a stylistic trait associated with the principal image of Buddha in the Mahabodhi temple at Bodh Gaya during the eleventh and twelfth centuries, now lost. The Mahabodhi sculpture is likely to have been a massive bronze made in contrasting metals, copper for the red monk’s robe and brass for the golden body of Buddha, and would have incorporated the idiosyncratic short neck: the statue was probably removed and destroyed for its metal content during the Muslim invasions of the twelfth century, see David Weldon and Jane Casey Singer, The Sculptural Heritage of Tibet, London, 1999, pp. 61-7. The present stele commemorates the Mahabodhi vajrasana Buddha in form and style, and portable plaques such as this served to spread the eastern Indian aesthetic and stylistic idiosyncrasies to Burma, Tibet and beyond.

The stele depicts the Eight Great Events in the life of Buddha. The nativity at Lumbini is depicted at the top left, with the first sermon at Sarnath below, and the taming of the Nalagiri elephant beneath.  The miracle at Sravasti is depicted top right, with the descent from Trayatrimsha heaven below and the presentation of honey by the monkey at Vashali beneath. Above the central image of Buddha seated beneath the bodhi tree at the vajrasana site is a scene representing his death and final enlightenment, or mahaparinirvana.

This very fine and rare Qianlong-period bronze depicting Avalokiteshvara, the bodhisattva of compassion, reflects earlier eastern Indian sculptural traditions (estimate $250/350,000). Large parcel-gilt bronzes such as this were popular with the Qianlong emperor, who commissioned quantities of statues in this elegant style representing buddhas, bodhisattvas and deities from the Tibetan pantheon. The emperor was fascinated with ancient bronzes from India, Kashmir and Nepal that had accumulated in the court and Chinese monastery collections, and this extraordinary bronze is a testament to that artistic legacy. 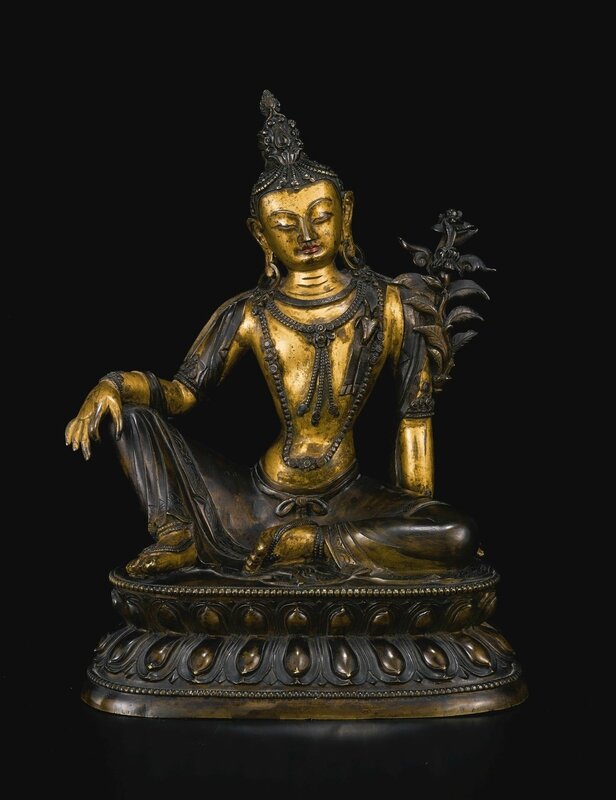 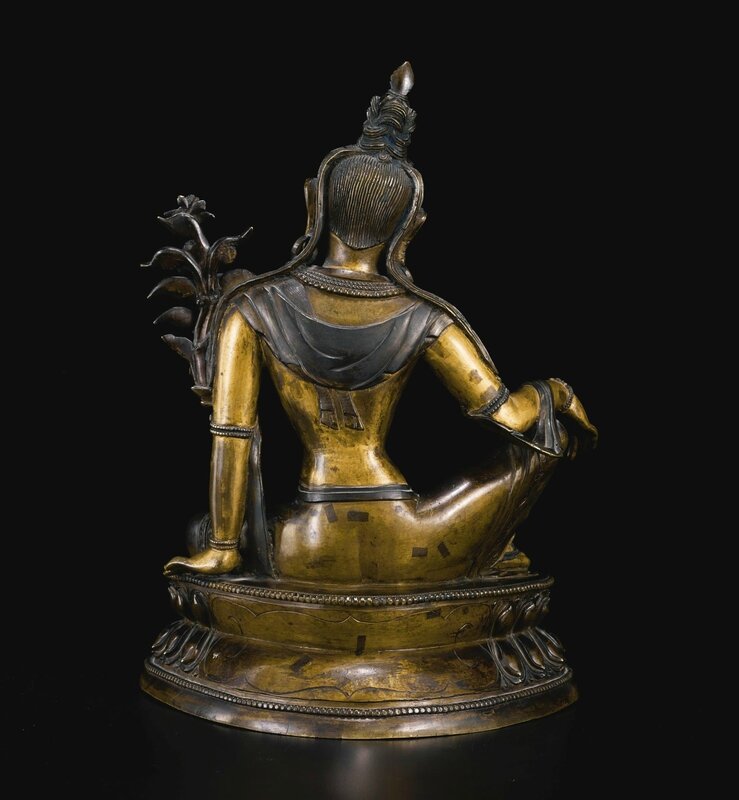 Note: This rare Qianlong period bronze maintains a long tradition in China of representing Avalokiteshvara seated in the posture of royal ease, rajalilasana, and is often identified as Water-Moon Guanyin residing on Mount Potalaka. However the stylistic conventions in this case are Indo-Tibetan rather than Chinese.

Such parcel-gilt bronzes were popular with the Qianlong emperor who commissioned quantities of statues in this elegant style representing the Tibetan pantheon devised by the imperial preceptor Rolpai Dorje (1717-1786), see Walter Eugene Clark, Two Lamaistic Pantheons, Cambridge, 1937. Both the emperor and Rolpai Dorje were fascinated with the ancient bronzes from India, Kashmir and Nepal that had accumulated in the court and Chinese monastery collections.

The style of this Avalokiteshvara reflects Pala period eastern Indian sculptural traditions. In marked contrast to the highly burnished fire gilt bronzes that exemplify Qing period Buddhist sculpture, the Avalokiteshvara is un-gilt, like the majority of Pala bronzes, but with gold applied to the body as seen in numerous Pala and Nepalese works in the Qing Palace collection, see The Complete Collection of Treasures of the Palace Museum: Buddhist Statues of Tibet, Hong Kong, 2003, pls. 5, 19, 34, 43-4, 52, 74.

The single leaf crown tied to the knotted hair is a feature often seen on Pala sculpture. A Qing period fire-gilt bronze in the E. M. Scratton Collection, depicting this same rajalilasana iconography, highlights the difference of appearance between the parcel-gilt bronzes and the more common gilded works of the period, see Giuseppe Tucci, Tibet: Land of Snows, New York, 1967, p. 18, pl. 2.

The Indian, Himalayan and Southeast Asian Works of Art sale also features this Gilt-Bronze Figure Depicting a Dakini from Tibet, 16th/17th Century (estimate $250/350,000), likely part of a larger sculptural group that centered upon Chakrasamvara and his consort Vajravarahi. What makes this cast-bronze representation of a Dakini so remarkable is the attention to detail: the lotus placed at the crown of the head behind the tiara with its pearl and foliate clasp, its elaborate jewels and ornaments, and the skull garland wrapped around her neck. Note: This magnificently cast bronze depicts one of the four retinue dakinis from the inner mandala of Chakrasamvara, identifiable by the lotus and kapala attribute attached to the base at lower right.

The dakini stands in alidhasana on a double lotus throne, wearing a five-pointed tiara adorned with skulls, elaborate jewels and bone ornaments, and a garland of skulls around her neck. An elegant lotus is placed at the crown of head behind the tiara, and a pearl and foliate clasp secures the tiara at back atop her flowing hair, which falls gracefully across her lower back. She holds a kapala in her primary left hand, and the secondary left hand is raised and likely would have held akhatvanga. She holds a kartrika in the primary right hand, and a damaru in the raised secondary hand.

This sculpture would have been part of a larger set with Chakrasamvara and his consort Vajravarahi at the center, and fourdakinis in a circle around the central deities. The four goddesses—red Khandaroha, yellow Rupini, green Lama and blue Dakini—have the same iconographic presentation and are only distinguished from each other by color. This assembly of deities and dakinis are from the Thirteen Deity Samvarodaya Chakrasamvara Mandala as described in the Shri Maha Sambarodaya Tantraraja; for an example of the complete mandala, refer to a 16th Century thangka depicting the same, seeMandala: The Perfect Circle, New York, 2010, p. 124, pl. 24. Compare the four dakinis in the lotus petals surrounding the central figures, and also the lotus and kapala motif in the auxilliary four petals between each dakini with the current work.

Ritual objects, sculptures, paintings, thangkas and miniature paintings from the Estate of Dr. Claus Virch are also on offer in this diverse sale of Indian, Himalayan and Southeast Asian Works of Art. The exhibition will open to the public on 10 March, with the sale commencing at 10am on 16 March, followed by a second session at 2pm.