The highly articulated necklace designed as a graduated double row ribbon twist encircling the neck with contrasting strands of sparkling round brilliant and icy baguette cut diamonds all set in platinum, it evokes suppleness and movement in its every curve and cleverly separates into two bracelets of different widths as well as a bandeau or tiara making it a wonderfully versatile piece suitable for wear on endless occasions.

The larger of the two bracelets featured in a stylish 1958 advertisement for Sterlé jewellery in a French magazine. Verdura called it Les Ferrets de la Reine (the Queen’s studs) after the diamond jewels in Dumas’ The Three Musketeers. Fulco di Verdura was born in Palermo into an aristocratic and somewhat eccentric family whose artistic sensibilities would later reveal themselves in his creative designs. A childhood love of art and nature would go on to inspire and inform his work which is infused with colour, an unmistakable joie de vivre and bold glamour. He was a great believer in a personal approach to jewelery and really embraced the notion of bespoke designs made to flatter the individual wearer; therefore many of his pieces were completely unique, as is the case here. This fact greatly enhances the desirability of his jewels which are highly sought after by today’s collectors and discerning jewelery lovers, as keen as ever to adorn themselves with a piece of Verdura's style.

Provenance: This piece was commissioned from Fulco di Verdura by Baron Alain de Rothschild for his wife Mary and was purchased in Paris on 21st April 1958, it is accompanied by a copy of the original bill of sale. It remained in the Baroness's possession until sold at auction in 2015

Literature: Please see 'Verdura' by Patricia Corbett p178 for a description of this jewel Literature
For similar examples; Hugh Tait, The Art of the Jeweller - A catalogue of the Hull Grundy Gift to the British Museum 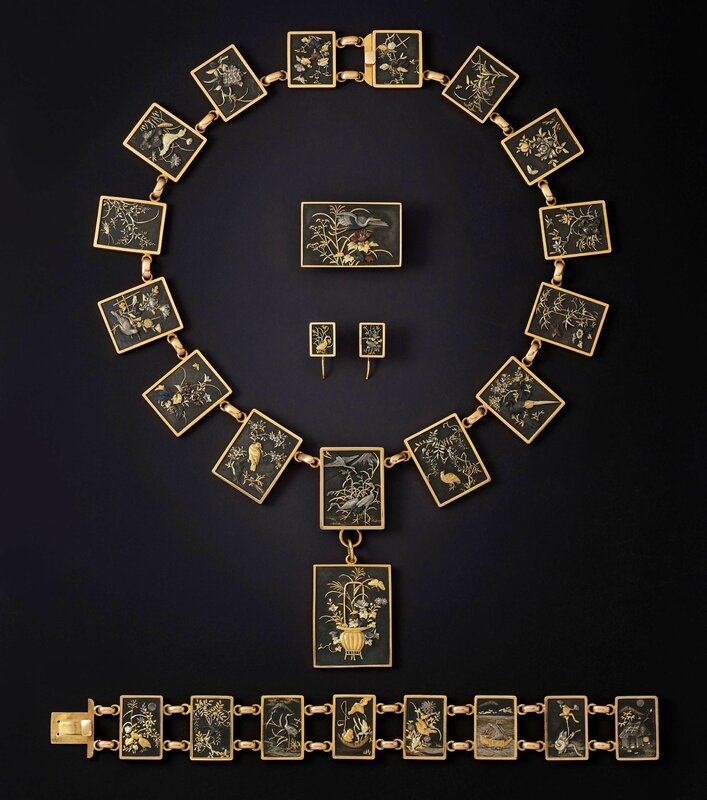 Comprising of a necklace set with rectangular panels depicting birds amongst foliage, a bracelet, a brooch and a pair of earrings. Each plaque inlaid with gold, silver & copper shakudo-work, within 18ct yellow gold borders. In black lacquer fitted box with foliate decoration

Shakudo is an finely made alloy of gold and copper, treated to resemble black lacquer. It is admired for its bronze-like sheen, the inventiveness of the method and the subtlety of the decorative effects that can be achieved by selective burnishing. The technique was wholly unfamiliar in the West until the middle of the 19th century.

Hancocks, founded in 1849 and still family owned, is one of London's oldest and finest specialist dealers buying and selling rare and collectable jewels.