A gray schist figure of a Bodhisattva, Gandhara, 2nd-3rd century

A gray schist figure of a Bodhisattva, Gandhara, 2nd-3rd century 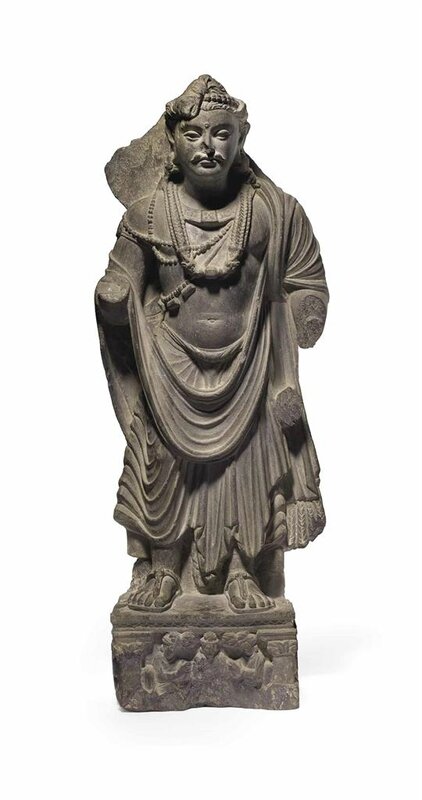 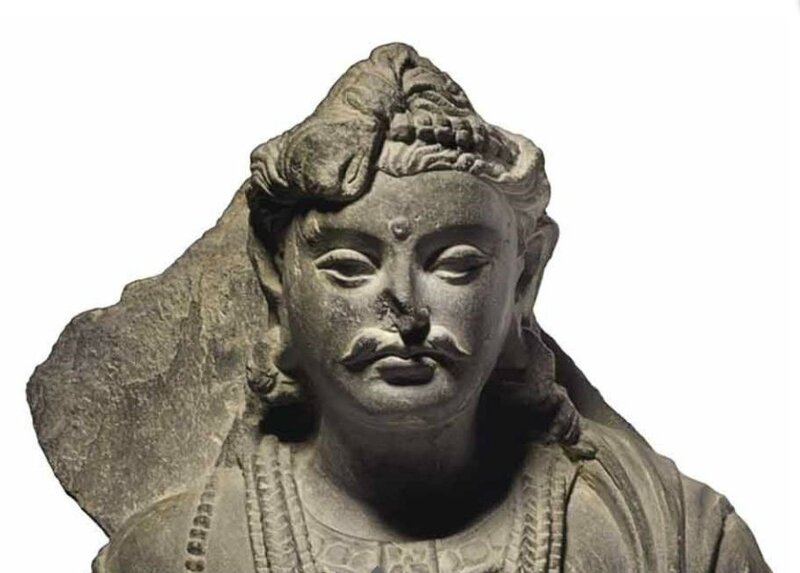 Dressed in a flowing sanghati with the drapery falling in elegant folds, adorned with a torque, beaded necklaces, a cord with three amulets and an elaborate necklace with makara pendants, the mustachioed face centered by a raisedurna, the hair in a floppy topknot secured with a beaded headdress, the relief scene below of Buddha flanked by worshippers. 21 ½ in. (55 cm.) high

Notes: The present figure would have held a water vessel in the left hand, identifying him as the bodhisattva Maitreya. This identification is reinforced by the hairstyle, which is generally reserved for this bodhisattva. Maitreya is considered the Buddha of the future - when the dharma is forgotten on Earth, he will descend from the Tushita Heaven to be born in our realm as the next Buddha. His iconic water vessel, the kumbha, is found in many different contexts within Indian sculpture, but is almost always a symbol of fertility and life. It is an apt visual icon for Maitreya's role as a progenitor of future peace and order.

When he is born on earth, Maitreya will be of Brahmin stock, and is depicted in rich robes similar to that of the historical Gautama Buddha prior to his renunciation of worldly goods. His vestments include a foliate torque, a rope-work necklace with a makara-head pendant, and a cord with cylindrical amulet boxes of a type still in use in South Asia. The heavy folds of his sanghati display the naturalistic treatment of drapery characteristic of the Gandharan period that is a holdover from the earlier Greco-Roman influence in the region.