LONDON.- The Royal Academy of Arts presents In the Age of Giorgione, a focused survey of the Venetian Renaissance during the first decade of the sixteenth century. The exhibition sheds new light on this pivotal period, which laid the foundations for the Golden Age of Venetian painting. It brings together around 50 works from public institutions and private collections across Europe and the United States, by celebrated artists such as Giorgione, Titian, Giovanni Bellini, Sebastiano del Piombo and Lorenzo Lotto, while offering an opportunity to rediscover other less well known artists such as Giovanni Cariani. The exhibition also considers the influence of Albrecht Dürer who visited Venice in 1505 – 6. By the beginning of the sixteenth century Giovanni Bellini had revolutionised Venetian painting, favouring a new naturalism, yet it was the next generation, most notably Giorgione and Titian, who became the protagonists of a new style. Giorgione emerged during the first decade of the sixteenth century, greatly influencing and rapidly transforming the stylistic evolution of Venetian art. These developments were advanced by the young Titian, who would soon become the leading artist in Venice. Little is known about Giorgione’s life, yet the elusive and poetic quality of his work was so powerful that, despite his early death in 1510, his legacy was profoundly felt in Venice and beyond. Giorgione worked largely for a new type of patron, that of the cultured and sophisticated connoisseur. He proposed a new, more poetic type of portraiture and created a serene bucolic world as a backdrop to both sacred and profane subjects. Today, there are only a few works that can be attributed to Giorgione with certainty. The exhibition will address the question of attribution, taking a closer look at many of the finest works from the period. The most important artist to emerge from Giorgione’s shadow was Titian, who became the preeminent artist in Venice following Giorgione’s premature death. While Giovanni Bellini remained in high demand for the commission of altarpieces, it was Titian who developed Giorgione’s soft and sensuous use of colour on a larger scale. Titian’s life-long artistic experiments led to a new era that has since become known as the century of Titian. The exhibition includes key works by Giorgione and the young Titian, some of which have rarely been seen in this country. One of the highlights of the exhibition is Giorgione’s Portrait of a Man (The San Diego Museum of Art). Known as the Terris Portrait, after the name of its former owner, the Scottish coal merchant Alexander Terris, it is one of only two known paintings bearing a contemporary inscription on the back of the panel identifying Giorgione as the artist. Displaying a technique similar to Leonardo da Vinci’s famed sfumato, in which areas of colour are blended into one another without perceptible transitions, the portrait epitomises what Giorgio Vasari praised as the ‘modern manner’. In the Age of Giorgione has been arranged in four sections: Portraits, Landscapes, Devotional Works and Allegorical Portraits. These groupings allow visitors to explore the idealised beauty, expressive force and sensuous use of colour that became the hallmarks of Venetian Renaissance painting, whilst rediscovering one of the most enigmatic and influential artists of the period. 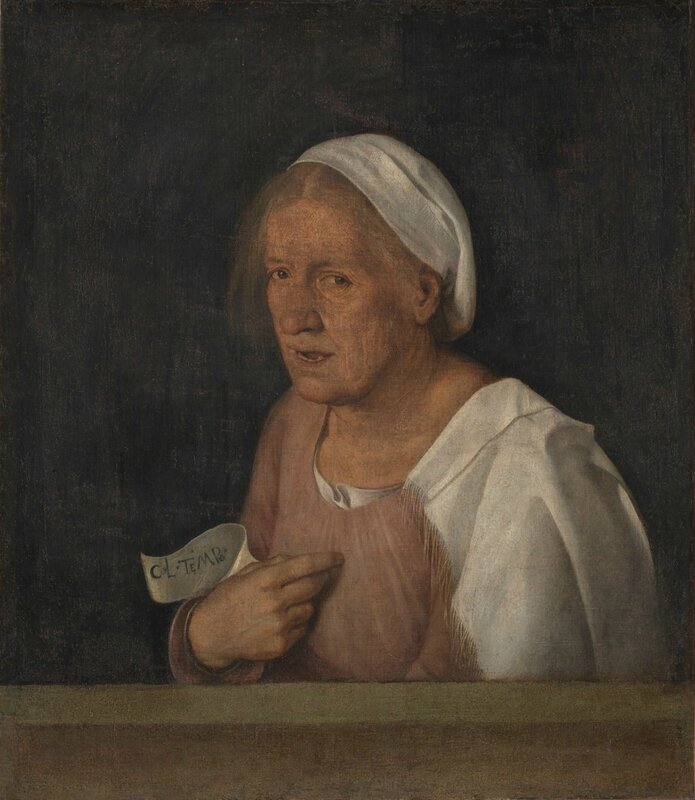