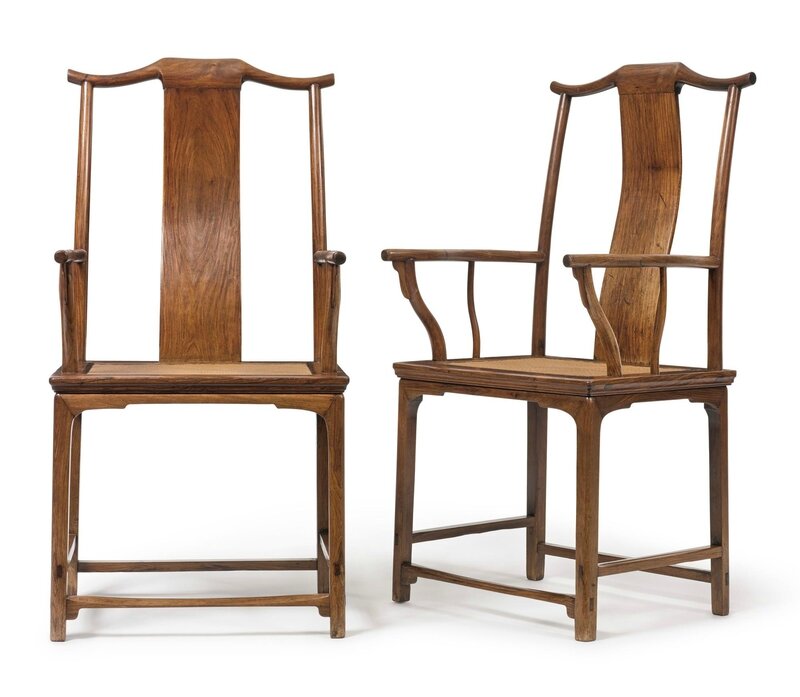 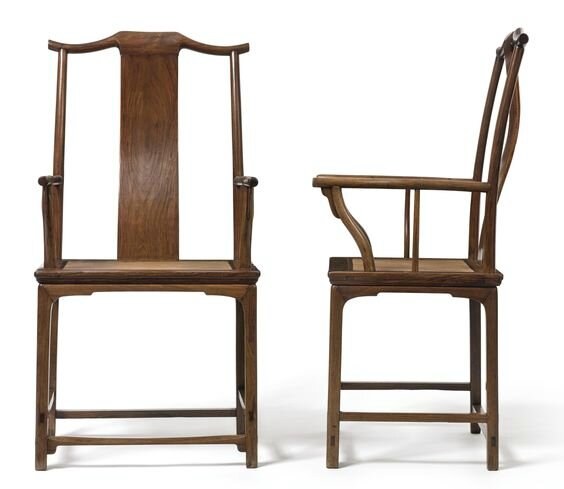 each with an arched crestrail terminating in truncated ends, with two gently curved cylindrical corner posts centered by a wide serpentine rectangular splat, the elongated outscrolled arms supported at the mid-section by S-form stiles and recessed front posts connecting to the soft mat seat within a molded frame and with two bowed stretchers underneath, all above four slender legs of square section joined by plain aprons and square section-stretchers (2).
Height 47 in., 119.4 cm; Width 23 3/8  in., 59.4 cm; Depth 18 1/2  in., 47 cm

Notes: The present pair of yokeback armchairs, predominantly plain with cylindrical and square-section members of consistent thickness and truncated outscrolled ends, focuses the eye not only on the dramatic figuring of the matching grain but on the balance of the form; the curvilinear and rectilinear elements in juxtaposition with the ample use of negative space. This form is generally more comfortable and more extravagant in its use of wood than the straight or C-curved examples. This type of large yokeback armchair is one of the core elements of the classic Chinese furniture vernacular. The famed 17th century arbiter of refinement, Wen Zhenheng, in his best known work, Zhang Wu Zhi (Treatise on Superfluous Things) advocated restrained design as exemplified by the present form and goes so far as to describe excessive decoration as vulgar.

Craig Clunas in Chinese Furniture, London, 1988, p. 20, describes armchairs of this type as being made in pairs, suggesting Chinese room arrangements aimed for symmetry. He further notes that Ming and Qing period illustrations characteristically show them used at dinner tables, in reception halls for guests and at the writing table in the scholar’s studio, and illustrates a woodblock print of the 1616 edition of The Golden Lotus (Jing Ping Mei), p. 22, fig. 8. The scene depicts the main male figure and his principal wife seated on guanmaoyi while dining, with his secondary wives and concubines seated on stools. For a general discussion on the basic model and decorative vocabulary of these armchairs see Curtis Evarts, ‘From Ornate to Unadorned’, Journal of the Chinese Classical Furniture Society, Spring 1993, pp. 24-33.

Many examples of this iconic form are preserved in major museums and private collections. Similar examples are illustrated in Wang Shixiang, Connoisseurship of Chinese Furniture, vol. 2, Hong Kong, 1990, pl. A70; and one of a pair is illustrated in Nancy Berliner, Beyond the Screen, Museum of Fine Arts, Boston, 1996, cat. no. 8. For a general discussion on the basic model and elegant decorative vocabulary of these chairs, see Curtis Evarts, 'From Ornate to Unadorned, A Study of Yokeback Chairs', Journal of the Chinese Classical Furniture Society, Spring 1993, pp. 24-33.