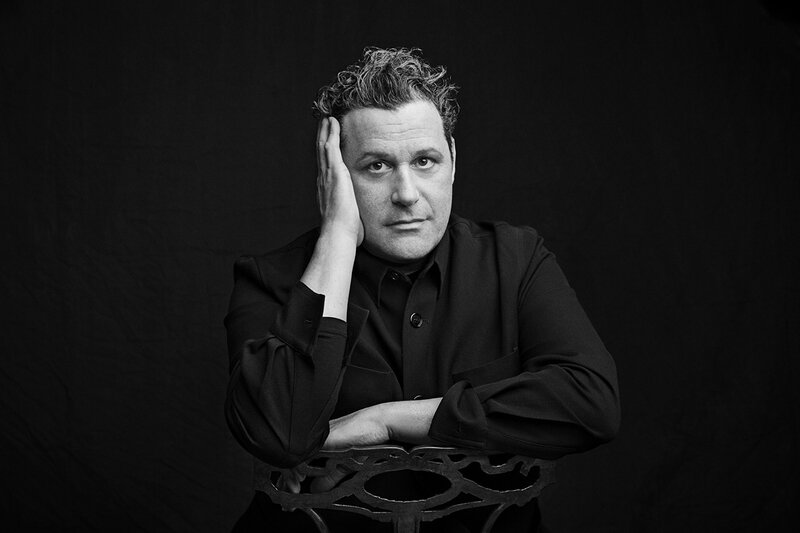 New York, NY - The Jewish Museum presents the first exhibition focused on Isaac Mizrahi, the influential American fashion designer, artist, and entrepreneur, from March 18 to August 7, 2016.  Through over 250 works, including clothing and costume designs, sketches, photographs, and an immersive video installation, this survey exhibition explores Mizrahi’s unique position at the intersection of high style and popular culture.  While best known for his work in fashion, Mizrahi’s creativity has expanded over a three decade career to embrace acting, directing, set and costume design, writing, and cabaret performance. Beginning with his first collection in 1987 and running through the present day, Isaac Mizrahi: An Unruly History weaves together the many threads of Mizrahi's prolific output, juxtaposing work in fashion, film, television, and the performing arts. Isaac Mizrahi’s inventive and provocative style brings complex issues into the arena of fashion, igniting a spirited discourse about high versus low, modern glamour, and contemporary culture. His runway shows were cast with unconventionally beautiful models of all ethnicities, dressed in Star of David belts, Western wear-infused lace, Adidas sneakers in place of high heels, handbags worn as hats, or a humble cotton T-shirt paired with a taffeta ball gown skirt. Uniting opposites is a Mizrahi signature, which can be seen in his many combinations of evening and sportswear, formal and casual, couture and mass market. Mizrahi’s outsized personality, charm, and innate sense of timing have made him a beloved figure, appearing in living rooms across the country through numerous film and television cameos, as a judge on Project Runway All Stars, and on his current show on the QVC network Isaac Mizrahi Live!. Organized thematically, Isaac Mizrahi: An Unruly History explores key trends in Mizrahi’s work—from the use of color and prints to his witty designs that touch on issues of race, religion, class, and politics. The core of the exhibition features iconic designs from the Isaac Mizrahi New York clothing label (1987–98), the “semi-couture” collections (2003–11), and his trailblazing line for Target (2002–8). It comprises over 40 “looks” that exemplify Mizrahi's colorful palette, experimental approaches to material, and irreverent use of cultural commentary and pop culture references. A selection of hats, jewelry, shoes, and accessories will also be on view. Highlights include Ball Gown Sport (1994), which pairs a lavish ball gown skirt, complete with crinoline and bustle, with a cotton T-shirt; Swirl (1990), a collaboration with artist Maira Kalman inspired by Henri Matisse’s hand-painted costumes for the Ballets Russes; Desert Storm (1991), a camouflage-printed halter dress created in response to the 1990 Persian Gulf War; Exploded Tulip (1992), which pays homage to the photographer Irving Penn’s Flowers series; High and Low (2004), which pairs a Target sweater with luxurious hand-beaded lace pants re-embroidered in cashmere; and Grand Pupa (2009), a hand-painted dress that draws inspiration from the insect kingdom. A dramatic installation of 12 costumes for theater, opera, and dance explores Mizrahi’s wide-ranging work in performing arts—including the Mark Morris Dance Group, the Opera Theatre of Saint Louis, the American Ballet Theatre, and the 2001 Broadway production of The Women at the Roundabout Theatre.

Mizrahi has also created three new made-to-order coats for the exhibition. Each is a variation on the same shape: Daisy presents a new take on a print for which the designer is known, rendered in hand-embroidered sequins; Dropcloth juxtaposes his two favorite fabrics, painter’s canvas and wool felt; andBubble is composed of a complex layering of delicate fabrics “quilted” together to create an ethereal yet structured coat. A gallery filled with over 100 sketches from throughout Mizrahi’s career provides unique insight into the designer’s work. Sketching is fundamental to Mizrahi’s design process, and fabric swatches are often attached to the images, adding texture and dimension to the artfully rendered compositions. A full set of preparatory drawings act as a storyboard for Mizrahi’s fall 1992 collection, shedding light on his use of sketches in preparation for a runway show. Also on view will be a selection of photographer Nick Waplington’s behind-the-scenes images of Isaac Mizrahi at work in the studio and on the runway taken between 1989 and 1993. A pink dress and matching pink poodle on the runway from the Cake collection, fall 2011. Photograph by Dan Lecca.

The exhibition will conclude with a three-screen, immersive video installation showcasing content drawn from archival footage of Mizrahi’s runway shows; the award-winning documentary Unzipped; the television program The Isaac Mizrahi Show; scenes from his cabaret, LES MIZrahi; excerpts from numerous screen and stage appearances; and his work on Project Runway All Stars and Isaac Mizrahi Live! Classic moments from the myriad films and television shows that have inspired the designer and enriched his world view, including La Dolce Vita, The Lone Ranger, Woody Allen’s Celebrity, Dinner at Eight, and more, are interspersed throughout the piece. Isaac Mizrahi: An Unruly History is organized by Chee Pearlman, Guest Curator, with Kelly Taxter, Assistant Curator, the Jewish Museum. The exhibition was designed by Galia Solomonoff and Talene Montgomery of SAS/Solomonoff Architecture Studio. The exhibition graphics and catalogue were designed by J. Abbott Miller and his team at Pentagram. About Isaac Mizrahi
Isaac Mizrahi was born in 1961 in Brooklyn, New York. Raised in a Jewish family, he attended the Yeshiva of Flatbush before transferring to New York City’s High School for the Performing Arts and then Parsons School of Design. He entered the New York fashion scene in the late 1980s; his clothing line, Isaac Mizrahi New York, debuted at Bergdorf Goodman in 1986. In 1989 he received the Perry Ellis Award for Emerging Talent and was named Council of Fashion Designers of America (CFDA) Womenswear Designer of the Year, an award he won again in 1991. Unzipped, a riotous, witty, and insightful documentary about the making of his fall 1994 collection, earned Mizrahi and the director, Douglas Keeve, the 1995 Audience Award at the Sundance Film Festival. When his fashion house closed in 1998, Mizrahi followed other passions in theater and dance, designing costumes and sets for Mark Morris and Twyla Tharp and winning a 2002 Drama Desk Award for Outstanding Costume Design for a Broadway revival of Clare Boothe Luce’sThe Women. In 2003 he was the first fashion designer to launch a line of well-designed, affordable clothes in collaboration with Target. Today he stars in Isaac Mizrahi Live!, a call-in home-shopping TV show that airs weekly on the QVC network. He also appears as a judge on Project Runway All Stars. Mizrahi has directed and narrated “Peter and the Wolf” at the Solomon R. Guggenheim Museum, directed and designed “The Magic Flute” and “A Little Night Music” for the Opera Theatre of Saint Louis, and worked the red carpet at the Oscars and Golden Globe Awards. He is currently at work on a television series and memoir. The poster for the film Unzipped, 1995. Copyright © Miramax, image provided by Everett Collection/Alamy. Isaac Mizrahi with models at the finale of his Spring 1997 collection.  Bebeto Matthews, AP Images. Behind the scenes, preparing the spring 2010 collection; Mizrahi’s design process is intense and at times hilarious, with many rounds of fittings and much impromptu experimentation. Photograph © Jason Frank Rothenberg.