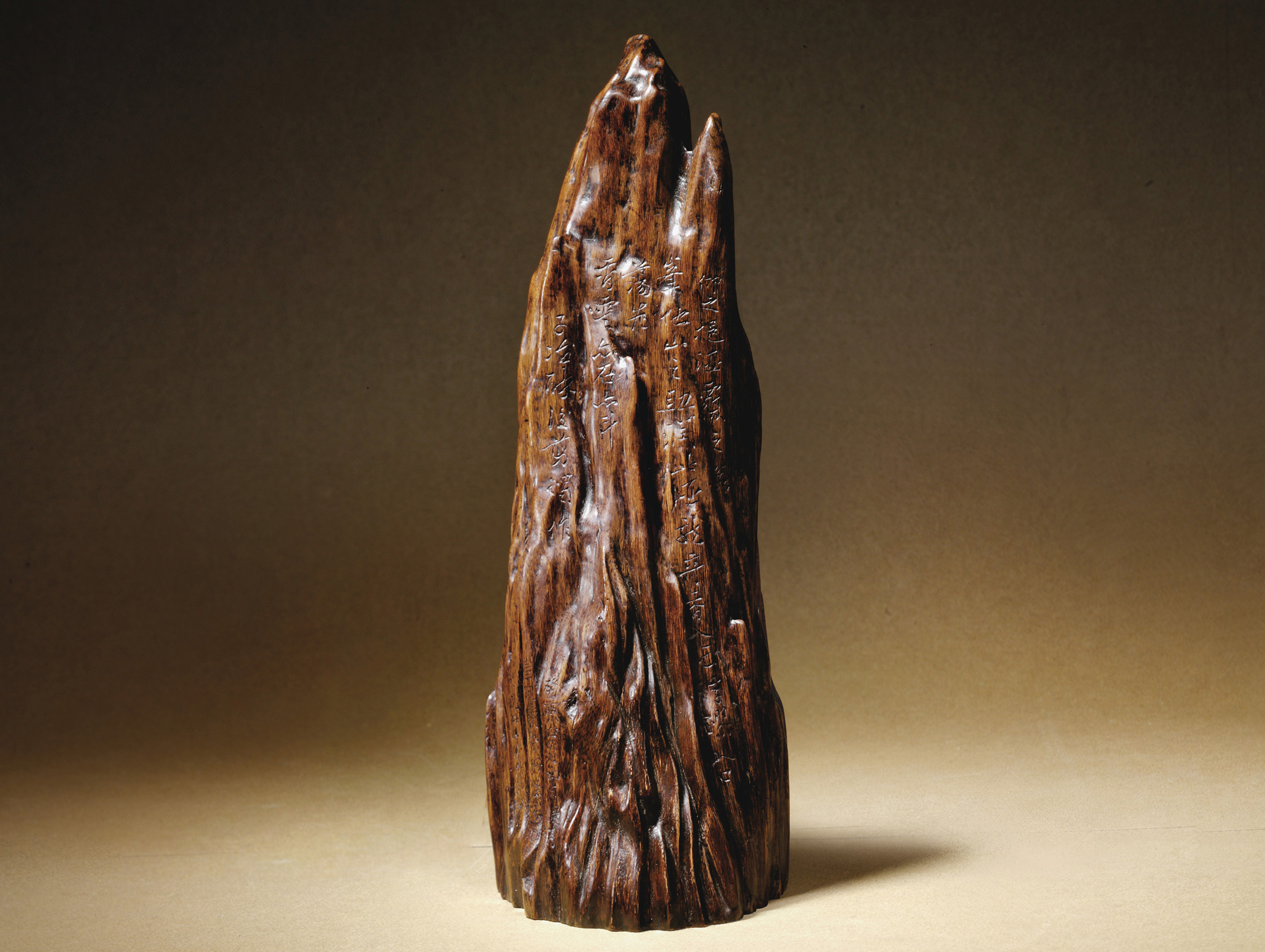 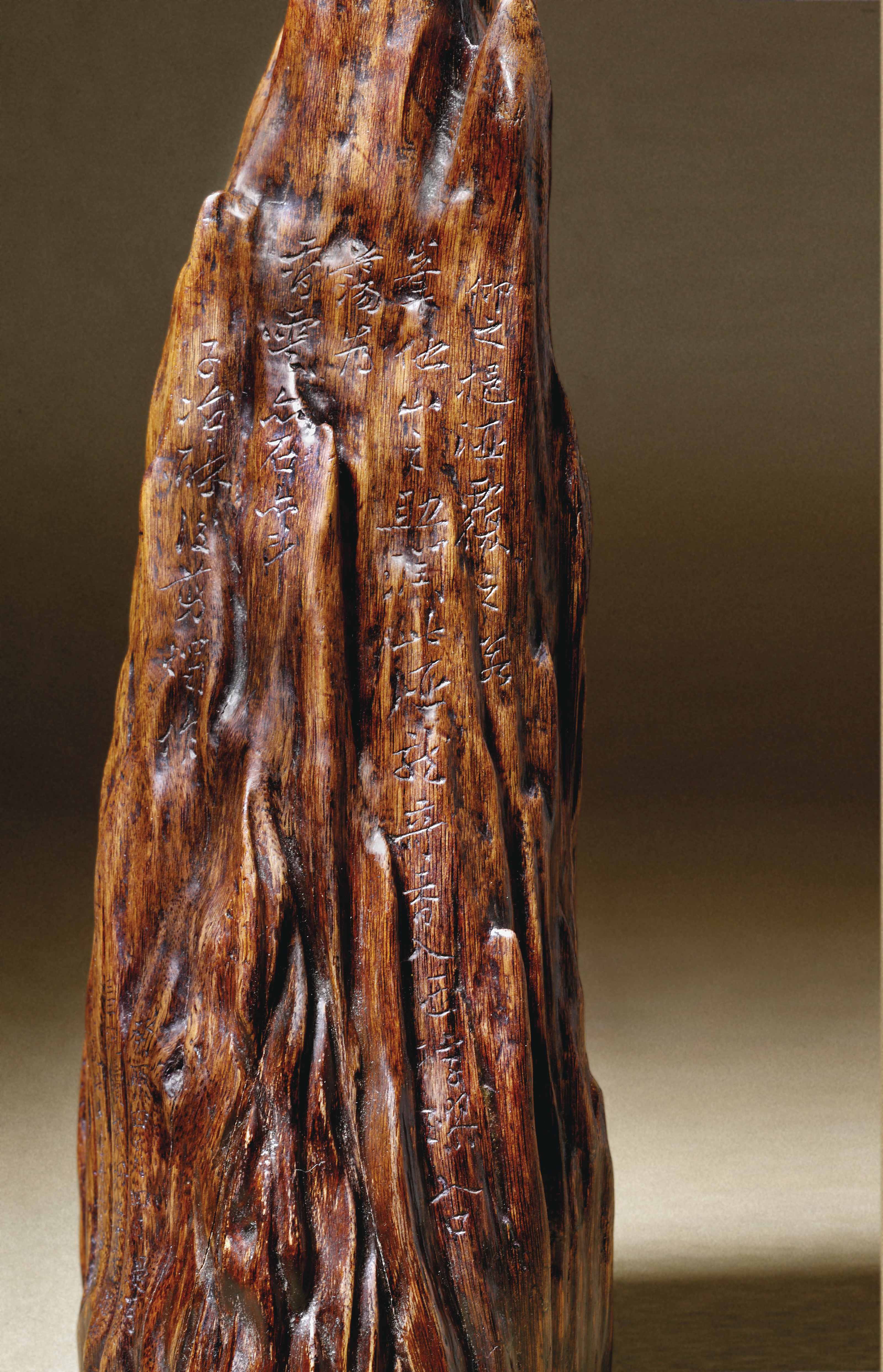 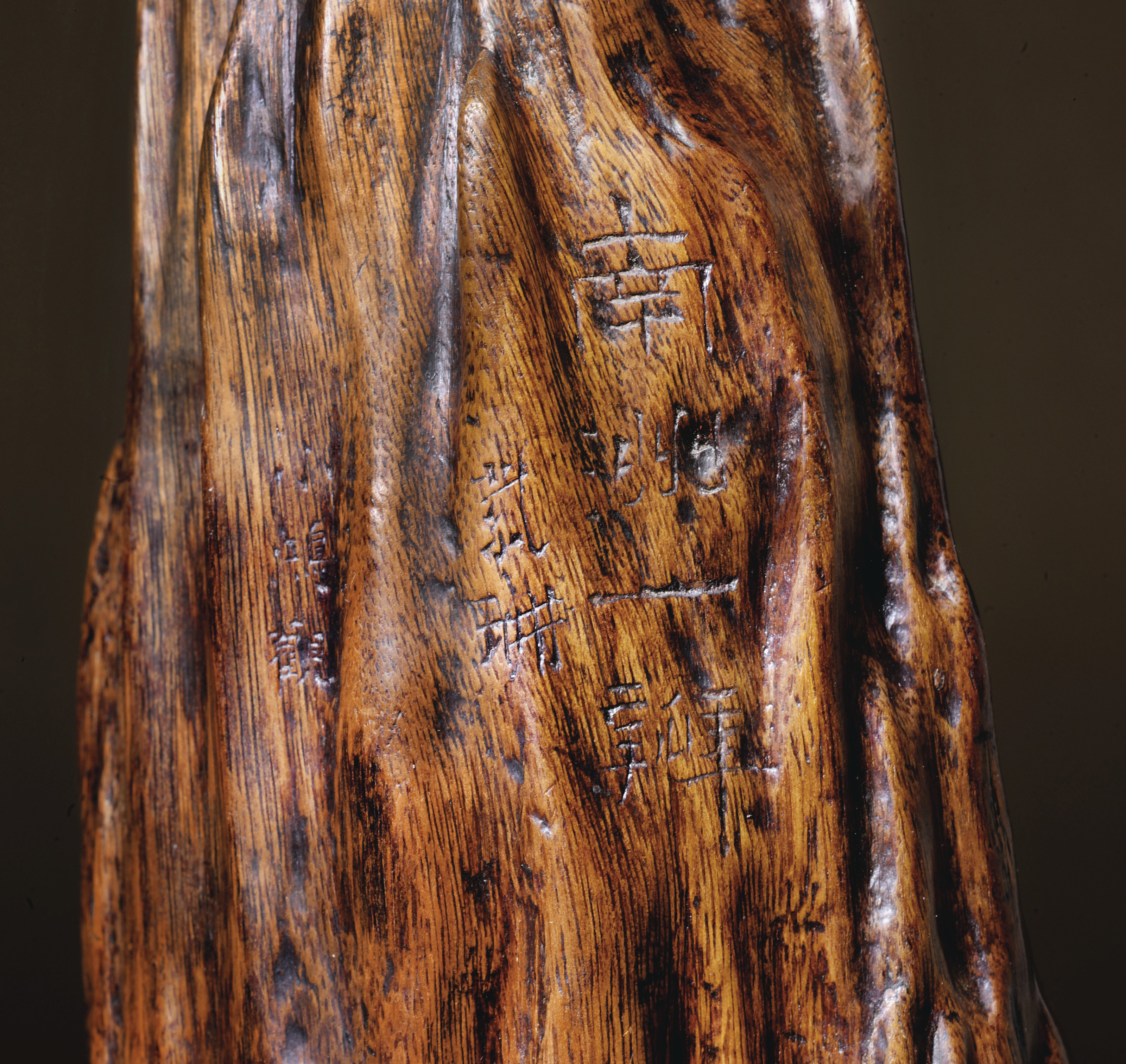 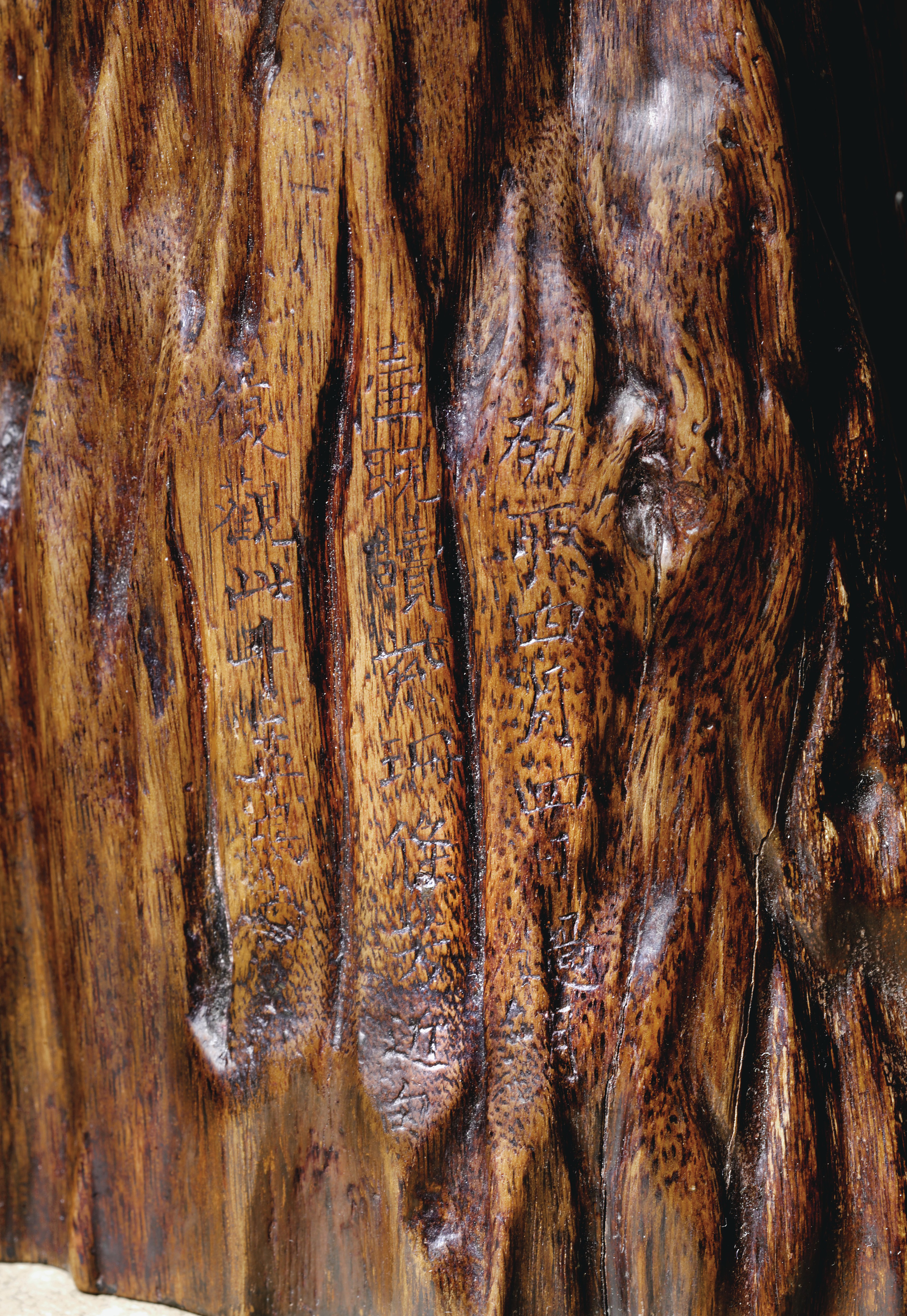 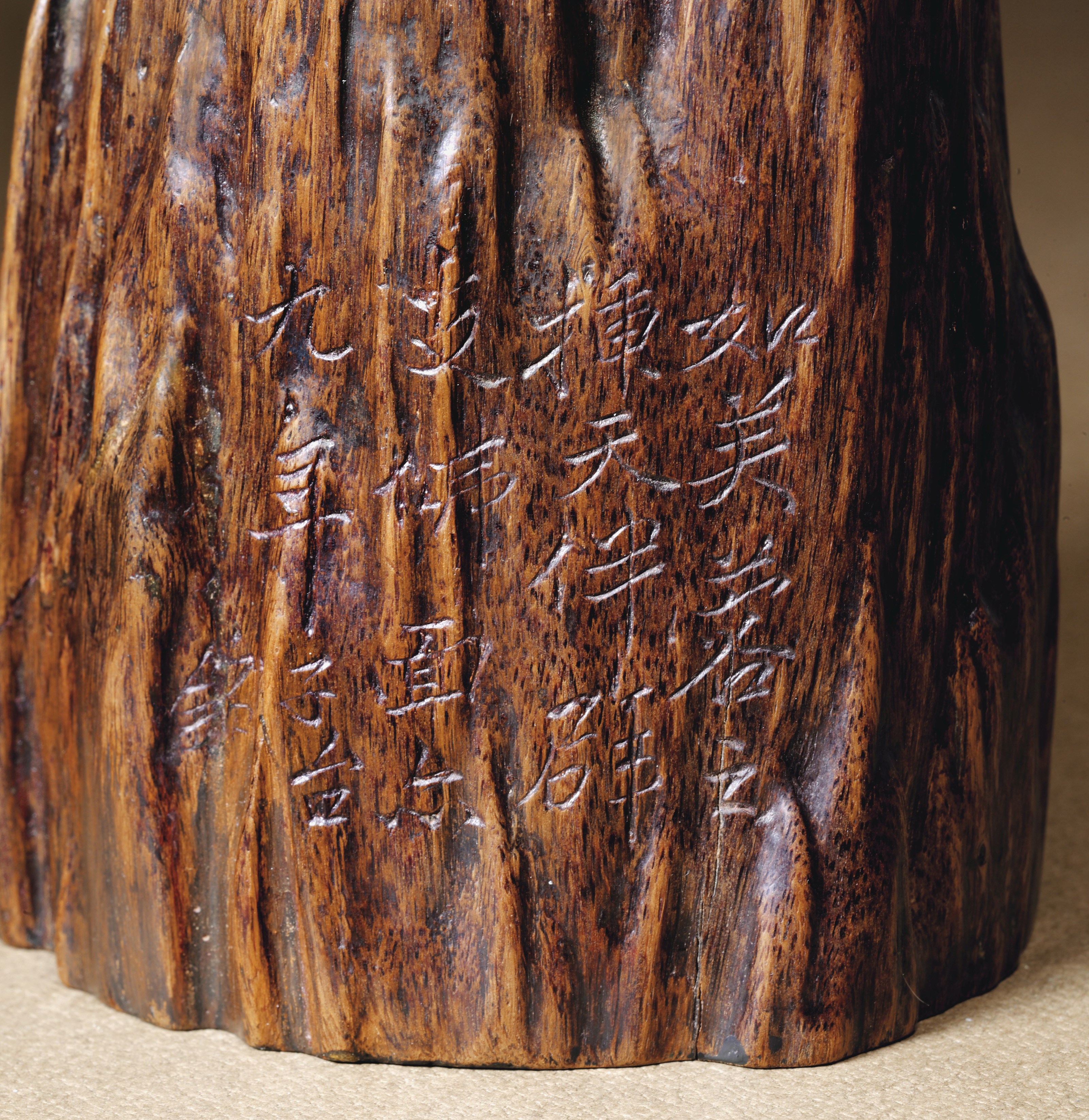 The chenxiangmu 'rock' is beautifully shaped in the form of a vertical mountain peak with vertical grooves and ridges, and the concave underside is covered in black lacquer and could function as a wine measure when upended. The sides are incised with four inscriptions, two by Qu Yingshao (1779-1850), and the other two, by Zhong Menghong (c. 1843).Together with P. Moss and S. L. Moss, This Single Feather of Auspicious Light: Old Chinese painting and calligraphy,London: Sydney L. Moss Ltd., 2010, 7 vol. Original cloth, cloth case. 'Rock'/libation cup.

Note: Mention of a chenxiangmu mountain seemed to first appeared in 1098, when the famous Song dynasty poet Su Shi (1037-1101) sent a miniature chenxiangmu mountain from his place of exile in Hainan to his younger brother Su Zhe (1039-1112), who was also an accomplished scholar and poet, for his sixtieth birthday. Both Su brothers wrote poetic essays (fu) to commemorate the object.

Chenxiangmu, also known as aloeswood or eaglewood, is a resinous wood from the Aquilaria tree, an evergreen tree native to Southeast Asia. The tree frequently becomes infected with a parasitic fungus or mold, Phialophora parasitica, and begins to produce an aromatic resin in response to the attack, a fragrance that permeates the wood, and which has made it highly treasured in China, Japan and Tibet. Because of its rarity, the wood is typically only found in small segments of usable material, and those that date to the Qing dynasty are traditionally pieced together to make small scholar's articles, such as brush pots or wine cups. Older examples were more likely to be made from sections of relatively larger size, but they were more vulnerable to cracks and flakes. Therefore, it is rare to find an example like the present carving of such significant size and condition, and that has dual functions.

Two inscriptions on the present chenxiangmu 'rock'/libation cup were inscribed by Qu Yingshao (1780-1850), who presumably was the owner of the present 'rock' at one time. Ziye was Qu's style name, and he was also known by his sobriquet Yuehu, Qufu and Laoye. A poet, essayist and carver, he was a recognized man of letters in the Jiangnan region and was especially known for his paintings of bamboo and his carving of the same subject on Yixing pottery teapots.

The other two inscriptions, with the signatures Menghong and Xiaohong, may belonged to Zhong Menghong, a scholar and calligrapher active during the Daoguang period (1821-1850). Based on the inscriptions, he viewed and inscribed the present 'rock' while visiting his friend (Qu), apparently on two different occasions.

The four inscriptions may be translated respectively as:

'Place it upright, pour wine!
Turn it over- like a peak! With the aid of other mountains
Moistening this 'dragon for wine'!
Wondrous fragrance infused in wine,
Rich brew entering one's mouth,
Floatingly, gives off clouds of fragrance,
By the quart, and by the gallon!
Ziye (Qu Yingshao) wrote this after getting drunk, and while trimming the candle'.

'On the fourth day of the fourth month of the year guimao (1843), I visited Yuehu (Qu Yingshao); I read his recent verse on the fragrance of the purple 'coral' branch (i.e. the present object), and also viewed this ladle-measure. Recorded by Menghong.

'Like an hibiscus flower penetrating Heaven as companion:
A pratyeka-Buddha facing the cliff for another nine years.
Inscribed by Ziye'