NEW YORK, NY.- A rare Francis Bacon self-portrait is set to come to auction for the first time in May, having remained in the same private collection since soon after it was painted over forty-five years ago. Widely acknowledged as the finest self-portrayal Bacon ever produced, Two Studies for a Self-Portrait (1970) will lead Sotheby’s Evening Auction of Contemporary Art in New York on 11 May 2016, with an estimate of US$22-30 million.

While Bacon is renowned for capturing the tortured psychological depths of human existence in his portraits, the overwhelming positivity of Two Studies for a Self-Portrait renders this work almost unique in the artist’s oeuvre. Here we see an elated Francis Bacon on the cusp of his career-defining retrospective at the Grand Palais in 1971 (Bacon was only the second living artist, after Picasso, to be afforded this honour), and in the throes of his relationship with George Dyer, whose suicide a year later was to haunt Bacon (and shape his art) for decades to come.

Little known to the public eye, Two Studies for a Self-Portrait has been exhibited only twice before - first at the acclaimed 1971 Grand Palais retrospective and then most recently at Marlborough Fine Art Small Portrait Studies exhibition in London in 1993. However, perhaps the work’s iconic status lies in the fact it was chosen to adorn the cover of Milan Kundera and France Borel’s definitive book Francis Bacon: Portraits and Self-Portraits, confirming its position at the absolute zenith of Francis Bacon’s most significant and enduring body of work. “Two Studies for a Self-Portrait goes straight in at number one of all the paintings I’ve handled in my career. Discovering a work such as this is like finding gold dust To my mind, the painting is worthy of a place alongside the very finest self-portraits of Rembrandt, Van Gogh and Picasso. It’s certainly among the greatest self-portraits ever offered at auction.” - Oliver Barker, Senior International Specialist in Contemporary Art

“…he was never more brilliant, more incisive or more ferocious when it came to depicting himself. In this he helped revive a genre, and Bacon’s self-portraits can now be seen as among the most pictorially inventive and psychologically revealing portraits of the Twentieth Century” - Michael Peppiatt in: Exhibition Catalogue, Rome, Galleria Borghese, Caravaggio Bacon, 2009-10

A masterpiece of self-analysis, Bacon’s dramatic brushstrokes, Impressionistic palette, use of corduroy fabric, and exigent marks recount the story of this work's creation as the artist brushed, smeared and lifted the paint in his drive to define his likeness. Photos of the artist’s Reece Mews studio in London show radiant pink, red, blue, and white hues smeared across his studio door, echoing those used in Two Studies for a Self Portrait as the artist scraped clean his brush as he reworked, and layered this canvas.

2016 is set to be a red-letter year for Francis Bacon with exhibitions of his work planned at the Grimaldi Forum in Monaco (sponsored by Sotheby’s), at Tate Liverpool, and at the Getty Museum in Los Angeles. The most significant publication on the artist for 30 years, Francis Bacon: Catalogue Raisonné, edited by Martin Harrison, is set to be released in the next few months and is expected to reveal no fewer than 100 unseen works by the artist. 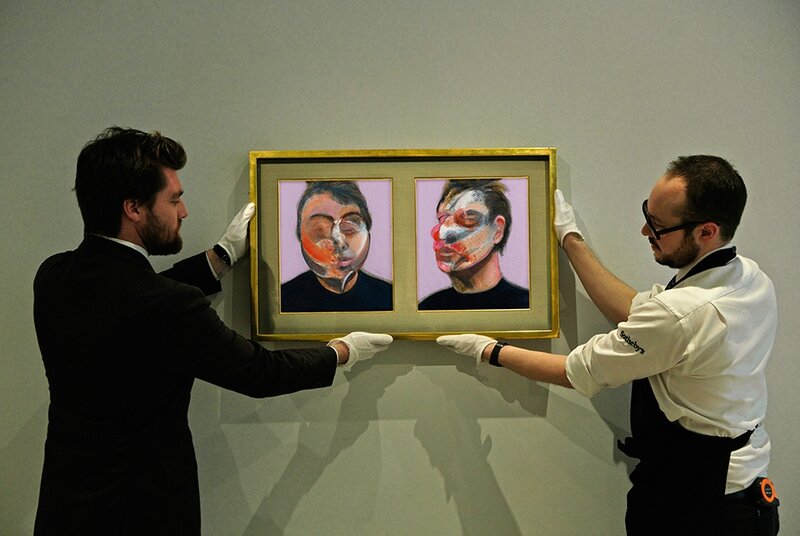