(Cf. my post: A painting of Chakrasamvara and Vajravarahi, Nepal, dated 1513) The goddess beautifully modeled with one foot atop the buffalo as her lion mount bites into his hindquarters, her face with a beatific smile as she pierces the demon with a trident so that he may be released from his animal form, wearing multiple beaded necklaces, armlets and festoons, holding various weapons in her multiple arms and flanked by devis above; 24¾ in. (62.8 cm.) high

Notes: Mahishasura was a pious devotee to Brahma and was rewarded with a boon that no man or god would be able to conquer him. Thus invincible, he battled the gods and took over the heavens. Helpless against Brahma's boon, the gods appealed to the goddess Parvati, who agreed to harness the shakti of all female celestial beings to fight Mahishasura. She assumed the form of Durga and borrowed weapons from each god. After nine days of fighting, she vanquished Mahishasura and his army and restored the heavens to the gods.

This sculpture depicts the final moments of the duel between the goddess and the demon. The bull demon shows his war wounds – an arrow is impaled into his hindquarters and the discus is imbedded in his side. Durga stands on the buffalo, one hand grasping his snout as she plunges her trident into the animal to pull the demon out from the neck and send him to the netherworlds. Her lion prepares to bite into the rump for good measure.

The worship of a mother goddess as the source of life and fertility has ancient roots, but the composition of the text Devi Mahatmya ("Glory of the Goddess") during the fifth to sixth century led to the dramatic transformation of the female principle into a Great goddess of cosmic powers. Durga is the cosmic Magna Mater, and this popular iconic type encapsulates the struggle between the goddess and the demon Mahishasura, who symbolizes ignorance, disorder, chaos, and evil. Later textual sources generally refer to the subject as Mahishasuramardini, or "killer of the buffalo demon." She remains the most important and popular form of the great goddess known generically as Devi or Shakti. The rounded rectangular, semi-transluscent bottle is of even, yellow tone. 2 3/8 in. (6 cm.) high, hardstone stopper

PROPERTY FROM THE COLLECTION OF GUY AND MARIE-HÉLÈNE WEILL
Across more than half a century, the collectors Guy and Marie-Hélène Weill engaged in an inspired deeply shared journey in fine art. Early patrons of Abstract Expressionism, the couple expanded their connoisseurship over time to encompass a diversity of categories and media. From masterful examples of Chinese painting to exquisite works of Southeast Asian sculpture, their private collection stood as a tangible expression of the curiosity and zeal with which they lived.

Guy Weill was born and raised in Zürich, Marie-Hélène Bigar in Lausanne, Switzerland. In the late 1930s, both Guy and Marie-Hélène’s families immigrated separately to the United States, where they met in 1940. During this period, Marie-Hélène Weill earned a B.A. degree in art history from Radcliffe College, while Mr. Weill enlisted in the U.S. Army, where he served in Military Intelligence under General Dwight D. Eisenhower. The couple married in 1942. After the war, Guy Weill opened British American House, a menswear emporium on Manhattan’s Madison Avenue that was the first to feature Burberry and Aquascutum in the US.

In the late 1960s, Guy and Marie-Hélène Weill discovered the rich history and beauty of Asian art. While visiting one of their daughters in California, they happened upon the Asian Art Museum of San Francisco. The Weills were overwhelmed by the simple forms and graceful lines of Chinese painting, porcelain, and bronzes. When they returned to Manhattan, the collectors began what they later described as a “lifelong process of self-education,” honing their united connoisseurial eye with the Asia Society and the China Institute where Marie-Hélène served as a docent. Together they studied, traveled extensively and learned everything they could about their new passion, and from the 1970s onward, Guy and Marie-Hélène Weill carefully built what would become one of New York’s premier assemblages of Asian art.

The collectors’ devotion to Chinese painting was especially notable: “The Weills have collected at a level of excellence and with a passionate enthusiasm,” wrote former Metropolitan Museum of Art Director Philippe de Montebello, “that rival that of distinguished Chinese connoisseurs.” After being outbid by the Weills at an auction of Chinese art, Met Museum curator Wen Fong approached the couple to become involved with the institution. Over the years, Guy and Marie-Hélène Weill were devoted volunteers, benefactors, and friends to the museum’s Department of Asian Art, where Mrs. Weill lectured on Chinese and Southeast Asian Art, and Guy Weill lent his artistry as a photographer.

In addition to the China Institute, the Asia Society, and the Metropolitan Museum, the Weills were keen benefactors of the Brooklyn Museum, the Arthur M. Sackler Gallery at the Smithsonian, and the Arthur M. Sackler Museum at Harvard University, as well as Carnegie Hall, Young Audiences and the Metropolitan Opera. The couple donated many works to museums, including items from their superb collection of Chinese painting to the Metropolitan Museum where it was shown as the 2002 exhibition, Cultivated Landscapes: Chinese Paintings from the Collection of Marie-Hélène and Guy Weill. According to the Weills, the bequest was a message “to those who love art as much as life: to enjoy art, you must share it.” 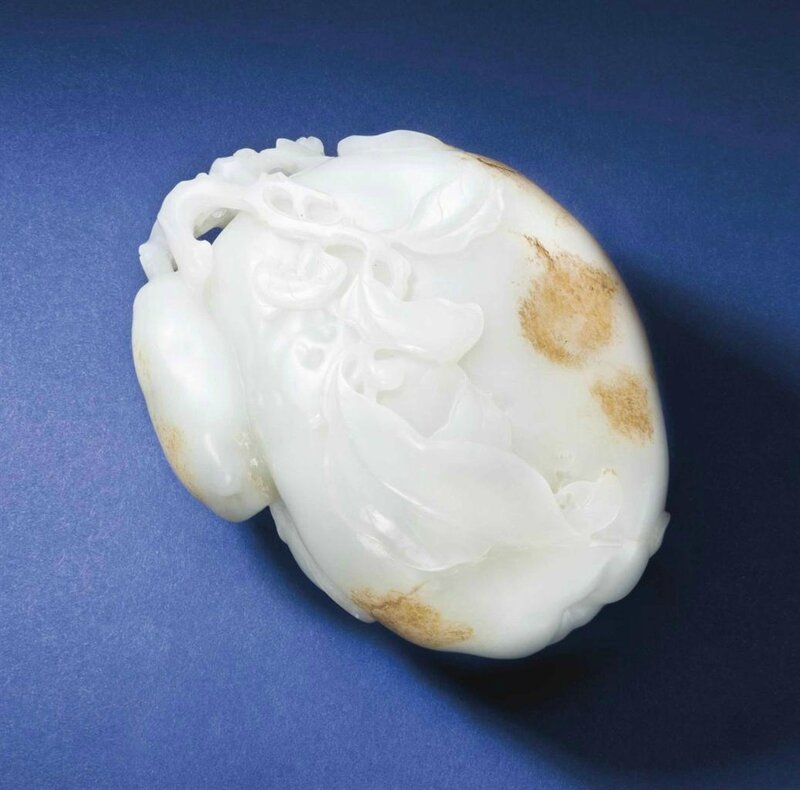 The bodhisattva stands on a double-lotus base with the principle hands in anjalimudra, and the multitude of others outstretched around him. He wears a diaphanous dhoti inlaid with hardstones, and is adorned with beaded jewelry. The faces, mostly peaceful, are arranged in tiers, and are surmounted by the diminutive head of Amitabha. 34 ¼ in. (87 cm.) high

PROPERTY OF THE BASS MUSEUM OF ART, SOLD TO BENEFIT THE ACQUISITIONS FUND

Notes: The present manifestation of eleven-headed Avalokitesvara was quite popular during the Qianlong period, and exhibits strong Tibetan influence. Buddhism was the state religion of the Qing dynasty, and the Qianlong Emperor was a devout practitioner of the faith. Of particular interest to Qianlong was Tibetan Buddhism, and perhaps the pinnacle of his Tibetan Buddhist activities came in 1780, the year in which he celebrated his 70th birthday, when the Panchen Lama came to both Jehol and Beijing, and bestowed upon the Emperor the Mahakala and Chakrasamvara initiations. The rituals for these coincided with his birthday and indicated that Qianlong had formally 'entered the Buddhist realm.' Qianlong's powerful devotion to Buddhism was readily carried over into works of art made during his reign.