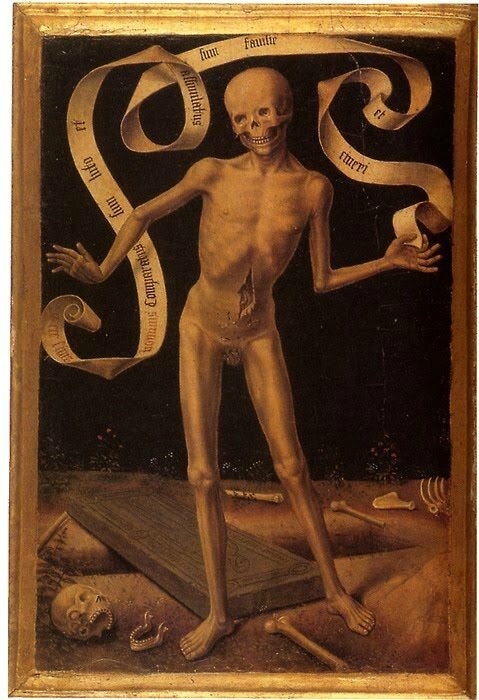 Not only is this work unique in Memling's oeuvre, its theme and form also make it extremely unusual for the art of its era. Physical examination shows that we are dealing with three small panels, which were painted on both sides but subsequently separated. The little triptych is not, however, Memling's first painting on an allegorical and moralising theme, and belongs to the series that also includes the Allegory of True Love and the Allegory with a virgin. It must have been a folding meditative painting, which could be stood on a cabinet with its wings slightly open. The front of the triptych featured the naked woman in the middle flanked by Death and the Devil, each with an admonitory banderole. The only actual scene on the rear is that of heaven, which appears between emblematic subjects - the coat-of-arms and the skull - in the wings. The texts refer to the end of mankind and the way to its salvation. By making the naked woman looking in a mirror the principal scene, the work becomes an erotic Vanitas allegory, a motif that was not destined to become popular until the sixteenth century.

The purely erotic character of the nude is indeed exceptional for its time. This is the only example in which the female genitals are shown uncovered. This woman, with a diadem in her long hair, who looks in the mirror and unashamedly shows off her nakedness but for the sandals on her feet, simultaneously represents Vanity and Lust. She is the antithesis of the virgin in the little painting in the Musée Jacquemart-André. To her left there is a griffon, a breed of dog that is customarily included in paintings whose subject is marriage or physical love. The significance of the amorous greyhounds on the right is also clear. The watermill, which constantly alludes in Memling to the Incarnation and which is once again placed prominently in the landscape, might be intended here as a contrast with the sinful ways of the flesh portrayed in the foreground. The woman's genitals in the Vanity scene correspond with the toad - the demonic creature to be seen over the genitals of Death. It is not possible to determine from any physical clues whether this panel was originally located to the left or right of the central panel.

In terms of composition (poses and the positioning of the banderoles) the layout presented here - with Death and Hell to the left and right respectively - would appear most satisfactory. The glowing reflection of the flames on the bodies in the jaws of hell recalls the Gdansk Last Judgment.