Chess pieces from the collection of Lothar Schmid referee of the ‘Match of the Century’ between Bobby Fischer and Boris Spassky. Photo: Sotheby's.

LONDON.- On 20 April Sotheby’s in London will offer one of the most important collections of early chess pieces to appear at auction. Each of the pieces carries huge significance in the evolution of the game throughout Persia and the Middle East. Highlights include an extremely rare, early and almost complete 10th-century set, which represents an important addition to the knowledge and study on the evolution of the game of chess (estimate £20,000-30,000). The entirety of this remarkable collection was assembled by one of the most influential figures of 20th-century chess, Lothar Schmid (1928-2013). Schmid is famed for refereeing what became known as the “Match of the Century”, the legendary 1972 Cold War face-off between the American Bobby Fischer and Boris Spassky of the Soviet Union. Together estimated at £73,800-117,200, the collection will feature as part of Sotheby’s Arts of the Islamic sale in London on 20 April 2016.

Schmid and the Match of the Century
Staged in the neutral territory of Reykjavik, Iceland, the 1972 match between Fischer and Spassky became a microcosm of the Cold War. With the reputation of two global superpowers resting on the shoulders of each player, the proceedings were marked by outlandish claims from both sides. The Soviets accused the US of using a secret weapon to distract Spassky, even testing a sample of orange juice for traces of poisoning, while Fischer insisted that the chessboard be changed and demanded that the match be moved to a room with no spectators. With the event at risk of descending into farce, it was down to Lothar Schmid’s diplomatic skills to hold the match together: “I felt there was only one chance to get them together”, Schmid recalled, “They were two grown-up boys, and I was the older one. I took them both and pressed them by the shoulders down into their chairs and I said: 'Play chess now!'”

Schmid, who died in 2013, was one of Germany's leading Chess Grandmasters. Winning his first Championship at the age of 13, he went on to participate in numerous Chess Olympiads. Schmid assembled one of the greatest collections of historic chess pieces, as well as a vast collection of books relating to the game. The library is said to be the world’s largest and most complete, comprising more than 50,000 volumes on the subject, including the rare copies such as the first printed chess book, dated 1497.

The collection will be offered as part of Sotheby’s Arts of the Islamic World auction in London on 20 April 2016. Belonging to the rare corpus of Fatimid carved rock crystal chess pieces, this King or Queen exemplifies the importance accorded to the game of chess by the Fatimid dynasty. The feat of carving rock crystal, an extremely hard element, was only mastered by the finest craftsmen. The abundant wealth of the Fatimid caliphs allowed commission gaming pieces of this magnificence. A particularly close example to the present piece is in the Victoria and Albert Museum, London 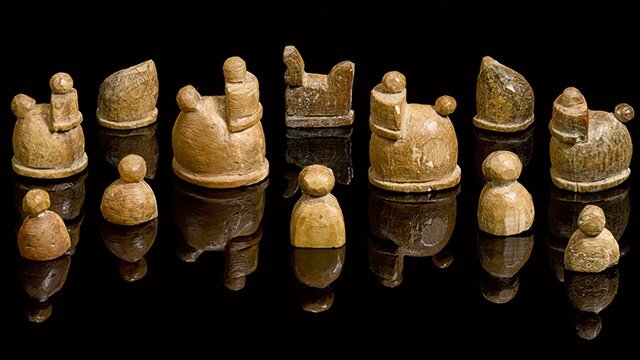 To find an almost complete chess set of this early period is extremely rare, marking this example out as an important addition to the knowledge and study on the evolution of the game of chess. The game is mentioned in writings from the period, notably by Firdausi (934-1020) who describes the game as one which came to Persia from India. The poet Omar Khayyam (1048-1131), born in Nishapur, lyrically compares the game of chess to that of destiny: “Tis all a chequer-board of nights and days Where Destiny with men for pieces plays: Hither and tither moves, and mates and slays, And one by one back in the closet lays”. Whereas individual chess pieces of this form and from such an early period are known, complete chess sets are practically inexistent, as highlighted by Dr. Thomas Thomsen, President for the last twenty years of Chess Collectors International: "In my 40 years’ experience, I am not aware of any other chess set from this period". These two pieces are examples of the 'Bishop' and 'Knight' forms existing on chess sets in 12th century Persia. Chess pieces with a stylised, abstract design are characteristic of Muslim chess pieces, these forms being copied later on in Europe, or attributed to Muslim craftsmen working on European commissions. The two small protuberances on the Bishop would have originally been intended as elephant's tusks, whereas the Knight, with its stylised animal form, now resembling a mouse, would most probably have represented a horse. Two stone gaming pieces, Central or South Asia, 9th - 12th century. Both carved in the form of stupas, with bell-shaped body on a short platform leading to a rounded dome with circular finial. Estimate: £800-1,200. Photo: Sotheby's.

These two stone chess pieces are reminiscent of the ‘stupa’, the emblematic Buddhist architectural form marking the skyline of South Asia. Whereas early texts refer to stupa shrines being erected over the scattered remains of the Buddha, their characteristic form has been re-interpreted and adapted on multiple architectural monuments. No other known examples of this form are known in chess pieces.