HARTFORD, CONN.- The Wadsworth Atheneum Museum of Art in Hartford, Conn., is mounting the first exhibition to fully explore the Romantic era as a formative period in costume history from Mar. 5, 2016 – Jul. 10, 2016. “Gothic to Goth: Romantic Era Fashion & Its Legacy,” presents historic garments alongside literary works, paintings, prints, and decorative arts to illustrate how European fashion from the Medieval, Renaissance and Baroque eras influenced new styles created in the Romantic era between 1810 and 1860. The exhibition explores how Romantic era principles of historicism, imagination and emotion, religion and the natural world—rejections of Neoclassical order and rationality—impacted not only costume but fine and decorative art, architecture, interior design, literature and music, and reveal the Romantic roots of recent Goth and Steampunk fashions. Lynne Z. Bassett, Costume and Textile Historian and museum consultant, is organizing the exhibition. The first half of the 19th century—the Romantic era—is characterized by a societal shift away from the order and reason of the Enlightenment period, and corresponding embrace of imagination and emotion, originality and vision, and individuality and subjectivity as guiding principles. Romanticism idealized nostalgia for the bygone quiet rural life in a time of cultural stress, offering an escape from the social and economic uncertainty of the Industrial Revolution. These values gave rise in America to the Hudson River School of landscape painters, Transcendentalist philosophers including Ralph Waldo Emerson and Henry David Thoreau, and a fascination with revisiting historic costume designs that has endured to influence fashion in the present day. “Gothic to Goth” explores how 500 years of European fashions were selectively integrated into creative new styles by showcasing women’s and children’s clothing and accessories from 1810−1860, alongside literary works, paintings, furniture and decorative arts of the period. Costume pieces, drawn largely from the Wadsworth Atheneum’s own collection, were carefully chosen to delve deeply into the inspirations of the little understood Romantic era of fashion. A cotton muslin dress from c. 1820, one of the earliest works in the exhibition, is an early example of historical revival clothing, with sleeves inspired by a Renaissance “slashed” style. A cotton dress from the 1830s incorporates the large, puffed sleeves and wide collar of the 16th and 17th centuries, while the decorative tab edging of the collar recalls clothing in the 13th and 14th centuries and the crenellations of Gothic revival buildings. In another mix of styles, a dress from c. 1840 reveals an overall silhouette akin to a Gothic arch and a bodice inspired by 16th-century gowns. A veneration of nature and spirituality is also embodied in the costume, as well as in the furniture and decorative arts featured in “Gothic to Goth,” along with the Romantic interest in historical revival. Garments including wedding gowns, a nursing dress, children’s clothing and accessories commemorating friendship reflect the sentimentalization of love, marriage and motherhood in popular Romantic era art and literature. A look at recent Goth and Steampunk fashions concludes the exhibition, revealing their roots in the rich imagination and aesthetic of Romanticism, and featuring designs by Alexander McQueen, Jean Paul Gaultier, Nightwing Whitehead and House of Coniglio. The entire exhibition showcases approximately 40 fully-dressed mannequins, in addition to accessories, furniture, paintings and decorative arts objects. 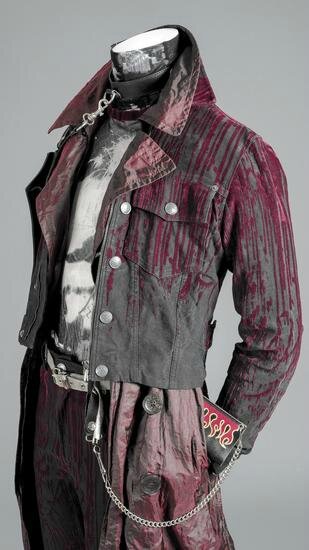