Pickman-Loring Collection
Highlights from the collection included a Junyao Tea Bowl with a delicate pale blue glaze suffused with purple splashes, (Lot 200), which sold for $315,000 (all prices include buyer’s premium); a 19th century Sang de Boeuf Beehive Water Coupe (Lot 214) which realized $255,000; a Blue and White Bowl decorated with exquisitely depicted dragons and phoenixes, symbols of the imperial family, (Lot 217, $104,550); and the top lot of the sale, a Sky Blue-glazed Bottle Vase with six-character Qianlong mark in underglaze blue on the base which achieved $411,000. high bowl with well-rounded sides and slightly incurved mouth rim, resting on a raised foot, the pale blue glaze thinning to light blue at the rim, mottled purple splashes and allover crackling both on the interior and exterior, with a round carved wood stand, ht. 3 1/2, dia. 5 7/8 in. pockmarks, hairline cracks, otherwise in good condition. with domed shoulder, short waisted neck, and rolled mouth rim, resting on a wide flat base, decorated with three roundels of chilong scrolls in anhua, glazed interior, six-character Kangxi mark on white-glazed base, ht. 3 1/4, wd. 5 in. in good condition with some pockmarks on base, minor surface scratches and stains 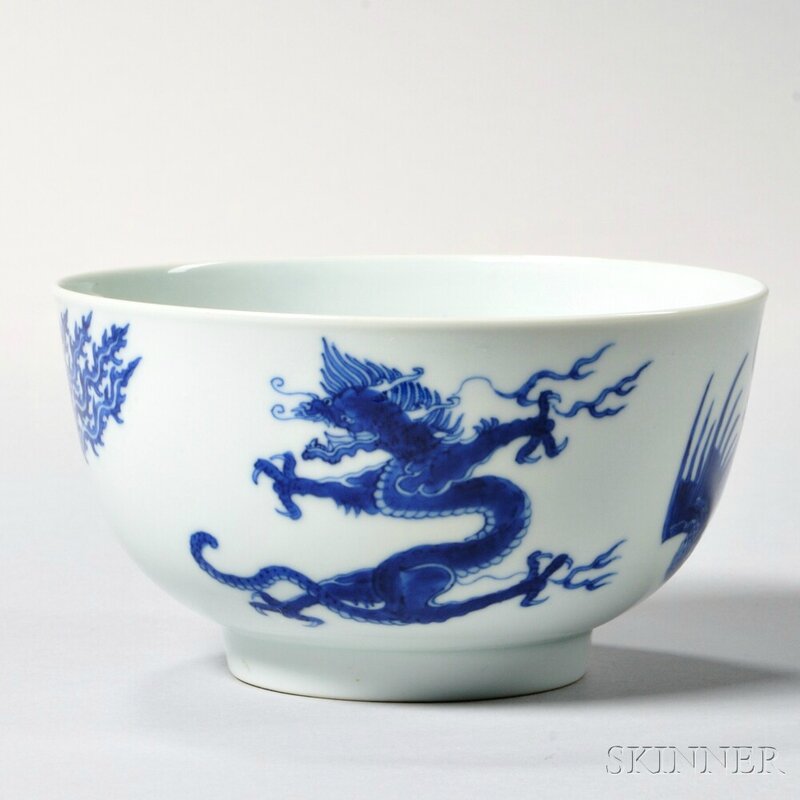 Other Auction Highlights
Other important pieces with strong provenance also performed well. Lot 9D, a 13th/14th century Turquoise and Black Kashan Plate from the collection of Marion E. James (1918-2015), professor emerita of the University of New Hampshire, brought $20,910, well above estimate; a Double-sided Twelve-panel Coromandel Screen dating to the Kang'xi period (1662-1722) depicting the tale of the Peach festival (Lot 523), purchased from the C.T. Loo collection, New York, and , and descended in thefamily of André Carlhian (1883-1968), sold for $58,425; and a Pair of Blue and Green Covered Dragon Jars, possibly Daoguang period (Lot 313), descended through the family of Ames Nowell of Massachusetts, soared to $195,000. 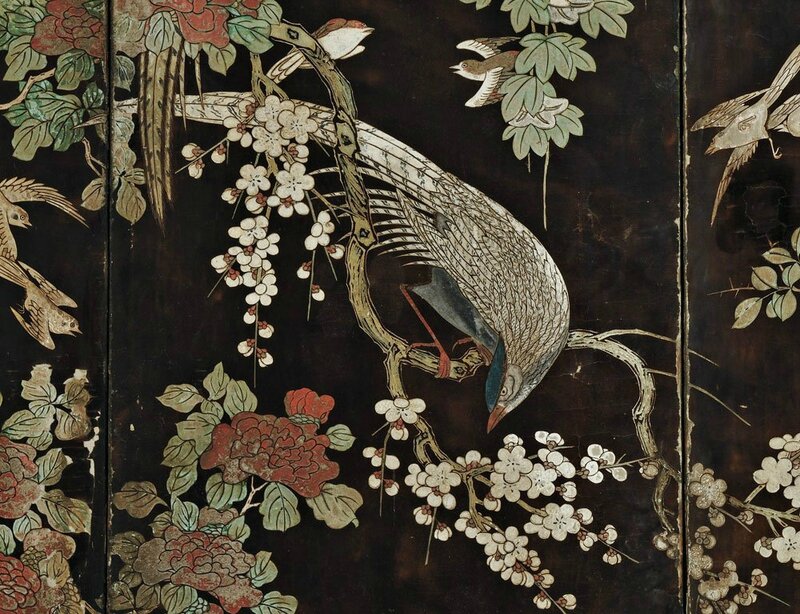 Lot 69, a rare and excellent example of a Qianlong period Cloisonné Ice Chest with polychrome decoration of fruits, insects and flowers, achieved $49,200, while the highlight within a strong selection of textiles was a Chestnut Embroidered Silk Formal Court Dragon Robe (Lot 409), which brought $12,300. At $135,000, a Jade-inset Ruyi Scepter (Lot 159) from a Palm Beach, Florida estate was the top-selling jade in the auction. 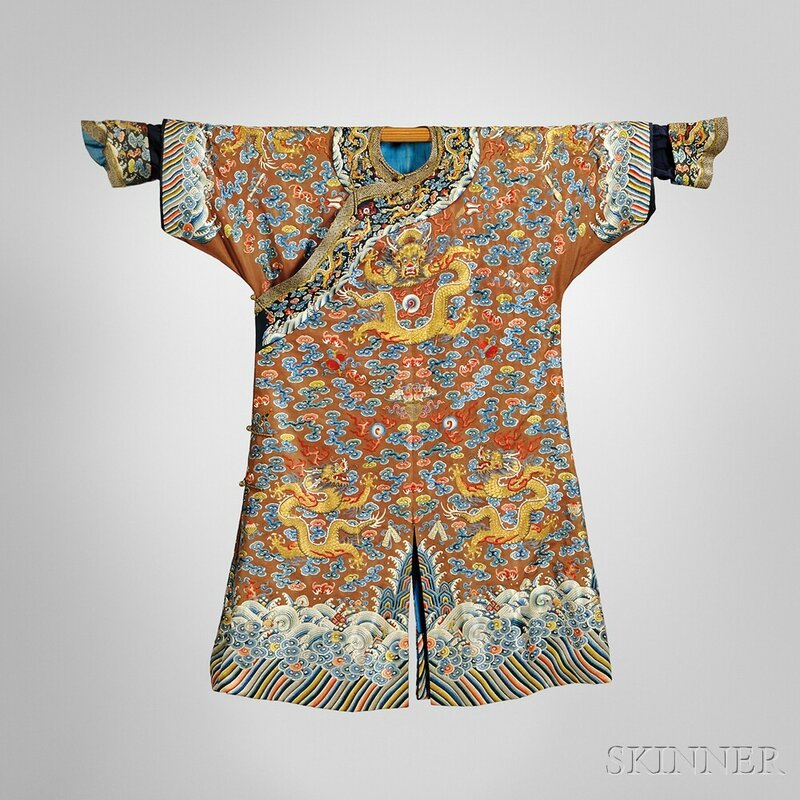 embroidered with nine dragons chasing flaming pearls in satin stitch and gold couching, on the front and back, sleeves and on the underflap, amidst ruyi-form clouds interspersed with bats and the "Eight Buddhist Treasures", above a hem of cresting waves with precious objects and a lishui border, the horseshoe sleeve cuffs and collar trimmed with similar motifs on navy blue silk, lg. 50 in. Collar trim partially detached on reverse, sleeves have been loosely stitched to shorten them as has the bottom of the robe, areas of loose threads all over, particularly concentrated at shoulders. 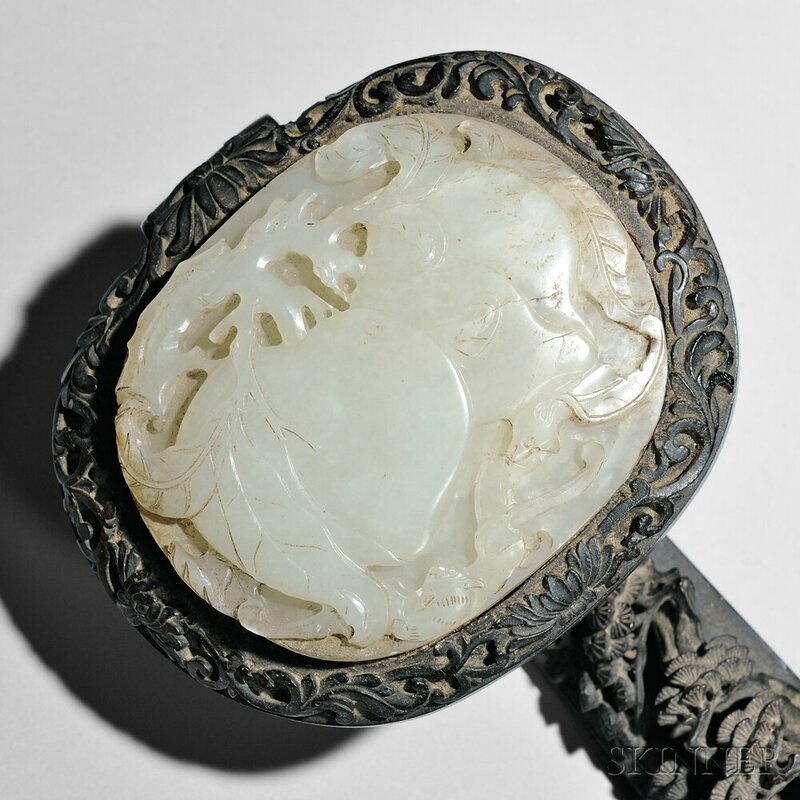 of possibly zitan wood, the oval head separately made and attached to the handle with a connector neck, decorated with a jade plaque inset depicting two carved peaches and bats, the handle with a long rounded rectangular jade inset with an openwork phoenix in the middle and an oval jade one with an openwork chilong at the end, the scepter decorated with a Daoist landscape with various flowers and trees as well as lingzhi, all in deep relief, the head and end encircled with a band of floral and foliate scrolls in bas-relief, the underside with an engraved and gilt inscription written by Wang Jihua (1717-1776), a Qianlong-period official, ht. 18 in.; heavily soiled to face, two jade plaques detached from the head and mid handle revealing glue residues and backing, the peach jade with trace of old breakage, phoenix jade with hardened glue residues to the back, two holes to the end probably for a string to attach.

Upcoming Auction and Prices Realized
Skinner’s next Asian Works of Art auction in Boston is planned for mid-September, 2016, to coincide with the annual Fall Asia Week celebration of Asian art in New York.