the lustrous and even white stone exquisitely worked in the form of a lobed floral bloom with delicate rounded walls rising steeply from the foot, one side elegantly tapering into an openwork handle modelled in the form of a ram's head depicted turned to one side, the beast sensitively rendered with a serene expression with a slightly open mouth and a beard conjoined to the exterior of the vessel, its head accentuated by a pair of precisely striated curved horns, one extending into and silhouetting the edge of the vessel, the exterior of the vessel decorated in low relief with a band of upright acanthus leaves, all supported on a splayed foot depicted as a lotus bloom with furled petal tips radiating from a rounded centre - 19 cm, 7 1/2  in.

Note: Exquisitely worked cups carved in this florid yet masculine fashion and made of the purest white jade have their origins in Hindustan in the Mughal period. Mughal jade pieces were first introduced to China around the middle of the Qianlong Emperor's reign. They were submitted as tribute to the emperor who quickly grew very fond of them. The first carved Mughal jade bowl sent from Central Asia as tribute is recorded for AD 1756, and thereafter tribute gifts of this type continued to arrive throughout the emperor's reign and beyond. At the same time Muslim jade carvers were brought to work in the Palace Workshops to fashion similar wares and as early as 1764, exact copies of Indian jades held at the palace were ordered from the Chinese craftsmen working at the court. The emperor was fascinated by these beautiful objects and wrote more than seventy poems eulogising the many Mughal-style jade carvings in his collection. In these poems he praised the exceptional skills of the carvers together with the purity of the material. A poem, inscribed on a magnificent white jade shell-shaped cup sold in these rooms, 25th April 2004, lot 50, and composed by the emperor in the mid-Autumn of the jiawu year (equivalent to 1774 AD) is titled In Praise of a Hindustan Jade Drinking Vessel. In this poem the emperor wrote:

Jade from the Western Kun is matchless
for its skilled craftsmanship.
Water mills grinding the jade as thin as paper,
making drinking vessels and bowls for the officials.
Differing in form from what craftsmen have recorded
in the Zhouli.

Half a bulging caltrop, turned-over lotus leaf,
a kind of gardenia supporting the base.
Or one could compare it to an opened oyster shell,
like a bright moon clearly reflected in the water.
The hands find no marks, the eye finds hints
of how it was conceived and executed.
The tools handled with clever contrivance and clear
determination.
I simply cannot keep myself from gazing at it again
and again.

From the final words of this poem it is clear that the Qianlong Emperor was full of admiration by the beauty of the cup and his affection for the piece as well as his appreciation of the craftsmanship had no bounds. At least twenty-five extant Mughal-style jades bear the emperor's poems, engraved in the palace workshops (For further historical details see the article by Teng Shu-ping in the Catalogue of a Special Exhibition of Hindustan Jade in the National Palace Museum, Taipei, 1983, pp. 9-109).

Exquisitely fashioned from a fine white stone to form a stunningly delicate yet equally masculine vessel, this piece is rooted firmly in the tradition of Hindustan carving of the Mughal period. The ram’s head, modelled with carefully detailed facial features and combed beard, curves gracefully before flaring into a contrasting gourd-form cup. The exterior of the cup further complements the delicate scalloped form, which has been elegantly carved with acanthus leaves, and the foot modelled in the form of a fleshy lotus flower. The milky white jade heightens the sense of mystery and ethereality to undoubtedly cater to the Qianlong Emperor’s taste for the exotic.

Mughal-style ram's-head cups made during the Qianlong period follow two distinctive forms and styles: an asymmetric gourd shape that closely imitates the famous Shah Jahan cup, and a Chinese variation of the Mughal version that has a deeper cup that is of lobed form. The present piece follows the Shah Jahan cup closely, particularly in the thinly-carved walls, elegantly rendered head and curving neck of the ram, and highly floral decoration. The Shah Jahan cup, in the Victoria and Albert Museum, London (IS.12-1962), is one of the finest pieces of Mughal jade recorded. That cup, which is attributed to the 17th century (it also bears an inscription relating it to Shah Jahan and dating it to 1657), would appear to predate the present piece by about a century. It is recorded since 1868, when it was in the collection of Colonel Charles Seton Guthrie, late of the Bengal Engineers, who went to India in 1828, and it entered the Museum's collection in 1962. It is illustrated and discussed by Robert Skelton, The Indian Heritage, Court Life and Arts Under Mughal rule, Victoria & Albert Museum, London, 1982, p.151, no.12, and by Susan Stronge, Made for Mughal Emperors – Royal Treasures from Hindustan, London, 2010, p. 215, pls. 177-8 (fig. 1). 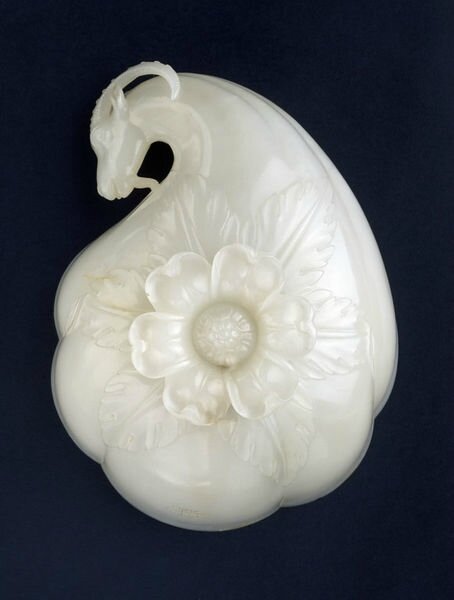 Drinking vessel in the form of a shell made for the Mughal Emperor Shah Jahan, India, 1657 © Victoria and Albert Museum, London.

A cup of this type, but lacking the detailed curve of the ram’s neck and with a flat floral foot, in the National Palace Museum, Taipei, was included in the Museum’s exhibition Exquisite Beauty – Islamic Jades,  2008, cat. no. 245, together with another with a flat oval foot and inlaid eyes, cat. no. 246; and a cup, but without a foot and the head placed vertically, published in James C.Y. Watt, Chinese Jades from the Collection of the Seattle Art Museum, Seattle, 1989, pl. 99; and a cup of this form, but with handle carved in the form of a goose head and inscribed with an imperial poem, from the Collection of Wilfred Fleisher and later sold at Christie’s London, 11th November 2003, lot 68.

Chinese artists were quick to assimilate certain elements of the foreign art form into their native tradition to form a new and characteristically Chinese style; see one in the National Palace Museum, included in the exhibition op. cit., cat. no. 266; another in the Palace Museum, Beijing, illustrated in The Complete Collection of Treasures in the Palace Museum. Jadeware (III), Hong Kong, 1995, pl. 161; and a cup from the collection of Dr and Mrs Marvin Gordon, published in Magic, Art and Order. Jade in Chinese Culture, Palm Springs Desert Museum, Palm Springs, 1990, p. 152, pl. 164. See also a cup, from the T.B. Kitson collection, sold in our London rooms, 21st February 1961, lot 291, included in the exhibitions Chinese Jade Throughout the Ages, Victoria and Albert Museum, London, 1975, cat. no. 439, and The Woolf Collection of Chinese Jade, Sotheby’s London, 2013, cat no. 60; and another from the Tournet collection, offered in these rooms, 11th April 2008, lot 2818.