A rare blue and white 'fruit and flower' hexafoil bowl, Xuande six-character mark and of the period (1426-1435)

A rare blue and white 'fruit and flower' hexafoil bowl, Xuande six-character mark and of the period (1426-1435) 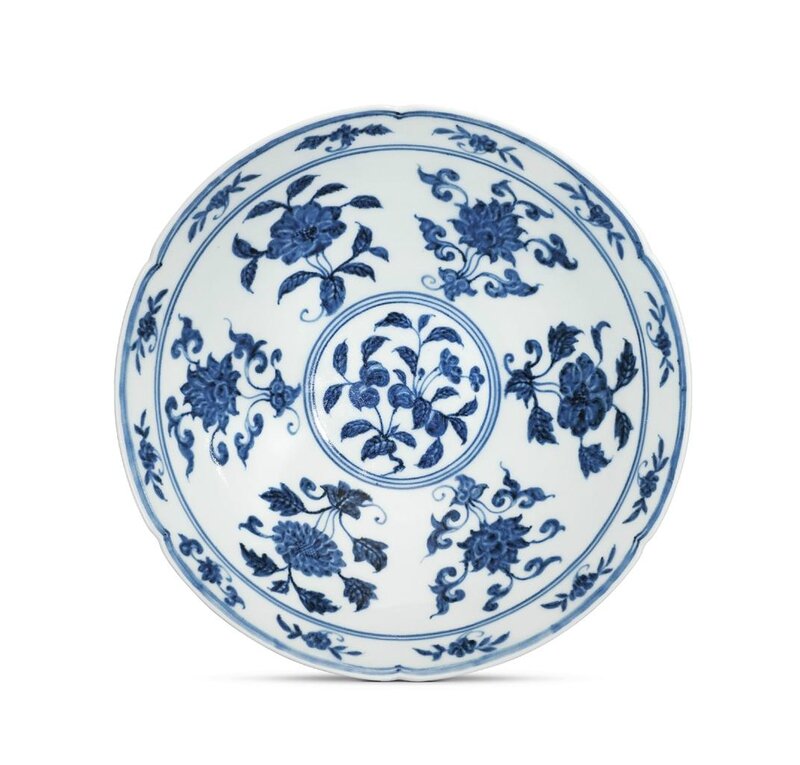 The interior of the shallow widely-flaring conical bowl is painted in rich blue tones with a medallion enclosing a fruiting and flowering peach below individual sprays of lotus, camellia, chrysanthemum and other flowers around the lobed rim. The exterior is painted with fruiting sprays of grapes, pomegranate, longyan, peach, persimmon and lychee above individual floral sprays and a classic scroll around the foot, box

Notes: Carl Alfred Jensen was a Danish engineer who worked for the Great Northern Telegraph Company in Denmark. He was stationed in various cities in China with his family between 1911 and 1927.

Similar examples from important public and private collections have been published, including one in the Palace Museum collection, Beijing, illustrated in Blue and White Porcelain with Underglazed Red (I), The Complete Collection of Treasures of the Palace Museum, Hong Kong, 2000, p. 159, no. 151; two in the National Palace Museum, Taipei, one is illustrated in Catalogue of a Special Exhibition of Hsuan-te Period Porcelain, Taipei, 1980, pl. 36, the other in the Catalogue of the Special Exhibition of Selected Hsüan-te Imperial Porcelains of the Ming Dynasty, Taipei, 1998, p. 178-179, pl. 62, one from the Percival David Foundation, now housed at the British Museum, and illustrated inOriental Ceramics, The World's Great Collections, vol. 6, Tokyo, 1982, pl. 88; one in the Freer Gallery of Art, included in ibid., vol. 9, pl. 102; one in the Shanghai Museum of Art, illustrated by Lu Minghua in Mingdai guanyao ciqi, Shanghai, 2007, fig. 3-34; one in the Capital Museum, Beijing and illustrated in Shoudu Bowuguan cangci xuan, Beijing, 1991, pl. 97; one in the Jingdezhen Ceramic Museum and published in Keitokuchin jiki, Kyoto, 1982, pl. 38 bottom; one included in the Asian Art Museum of San Francisco, illustrated by He Li, Chinese Ceramics, A New Comprehensive Survey, New York, 1996, fig. 403; one published in the Asia Society Handbook of the Mr. and Mrs. John D. Rockefeller 3rd Collection, New York, 1982, pl. 73; and another one formerly in the Ataka Collection, which was included in the Oriental Ceramic Exhibition, 1979, and illustrated in the Catalogue, no. 102.

Commentaires sur A rare blue and white 'fruit and flower' hexafoil bowl, Xuande six-character mark and of the period (1426-1435)