Lot 12, Sir Arthur Conan Doyle (1859-1930), Autograph Manuscript Signed ("Conan Doyle"), entitled "The Adventure of the Greek Interpreter", 34 pp, 4to, South Norwood, London, c.1893, in sepia ink on ruled paper removed from a composition book, with revisions in ink and pencil, publisher's page count in blue crayon, pp 22 & 33 versos with pencil scribbling by a child, tears and creases along edges with some slight loss not affecting text, some light spotting throughout. Housed in a custom-made red cloth portfolio with gilt labelled spine, some light fingermarks. Estimate US$ 380,000 - 420,000 (€340,000 - 370,000). Photo: Bonhams. The Case of the Greek Interpreter is best known for the first appearance of Holmes’s older brother Mycroft and is among a treasure-trove of Sherlock Holmes’ material included in the sale which also features: Lot 17, Sir Arthur Conan Doyle (1859-1930), Autograph Manuscript Signed ("A Conan Doyle"), entitled "The Problem of Thor's Bridge" and "Continuation of 'The Problem of Thor's Bridge'", 48 pp in two parts, 8vo and 4to, Crowborough, East Sussex, c.1922, in various colored inks with revisions in ink or pencil on yellow-ruled paper, some pages clipped, some soiling, folds and marginal tears, hole in upper left corner of second part from removal of metal clasp. First part bound in near contemporary white cloth lettered in gilt, bound for Doyle or his son; second part loose in custom red cloth portfolio and box. Estimate US$ 250,000 - 350,000 (€220,000 - 310,000). Photo: Bonhams.

• A handwritten page from probably the most famous Sherlock Holmes story, The Hound of the Baskervilles, which marked the return of the detective in 1901/2 after his supposed death at the Reichenbach Falls. As a publicity stunt, individual pages from the original manuscript were distributed to book shops in the United States. Inevitably, many were lost or stolen and the surviving pages are scarce and much prized. This page – from Chapter XIII – is especially valuable because it is one of the few of the remaining sheets that feature Holmes and Watson discussing the case. It is estimated at $100,000-150,000 (£70,000-110,000). An article by John Sutherland on the background to the texts is featured in the latest edition of Bonhams Magazine. http://www.bonhams.com/magazine/21317/

The sale also features a reminder of Doyle’s other career as a writer of romantic historical novels, in the handwritten 561-page manuscript of Rodney Stone: a Reminiscence of the Ring. Written in 1895, and set in 1851, the work brings together Rodney, sent to London to acquire the ways of a man-about-town, and his childhood friend, aspiring bare knuckle fighter Boy Jim, to solve a murder mystery. The estimate is $80,000-100,000 (£60,000-70,000). 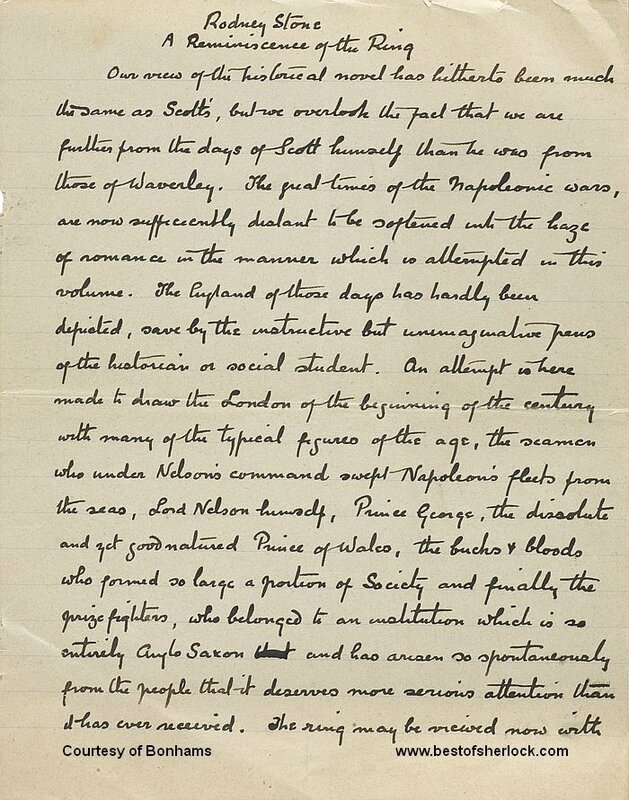 The sale is particularly rich in late 19th and early 20th century literature and also offers: • Draft and fair copies of Wilkie Collins play The New Magdalen from 1871/2 which was written simultaneously with the novel of the same name. The Magdalen of the title refers to a reformed prostitute and the play was a huge hit, was translated into several languages and ran for 19 consecutive months at the Olympic Theatre off Drury Lane where Collins staged equally successful dramatisations of his novels The Moonstone and Woman in White. The lot carries an estimate of $60,000-80,000 (£45,000-60,000). Lot 4, Wilkie Collins (1824-1889), Autograph Manuscript, being working drafts of the play "The New Magdalen. A Dramatic Story in Three Acts", in ink and heavily corrected, 88 leaves, plus manuscript fair copies in another hand with occasional corrections; together 212 pp on 161 leaves, including the Prologue, Acts I and II and a portion of Act III, 4to, London, c.1871. Housed in cloth folder and green morocco backed slipcase with gilt lettered spine. Overall toning with some tears and soiling, with minor loss. Estimate US$ 60,000 - 80,000 (€53,000 - 71,000). Photo: Bonhams.