A rare blue and white ‘pomegranate’ vase, Mark and period of Xuande

A rare blue and white ‘pomegranate’ vase, Mark and period of Xuande 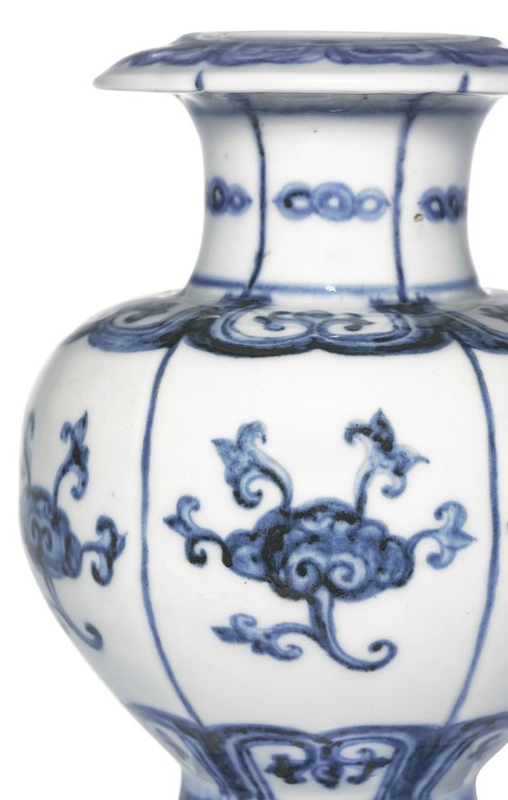 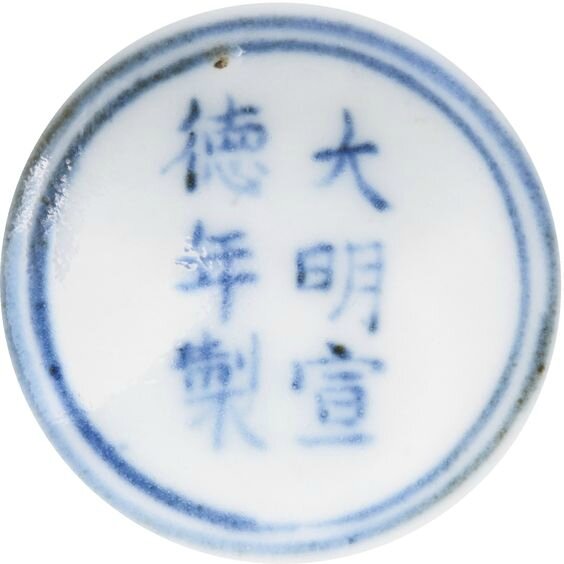 robustly potted with a baluster body divided into six lobes, rising from a splayed foot to a waisted cylindrical neck, sweeping up to a wide everted rim with a rolled lip, painted in deep cobalt-blue tones in the ‘heaped and piled’ effect, each lobe boldly painted with a lingzhi spray with radiating trefoil leaves between lappet bands, the neck similarly decorated with three joined circles, all divided by vertical line borders at the ribs, the out-turned rim and the foot encircled by broad pendent lappets, inscribed to the glazed recessed base with a six-character reign mark within a double circle, the footring unglazed - 18.2 cm, 7 1/8  in.

This vase is very unusual in shape, the downward pointing rim being otherwise rarely seen in Chinese porcelain. Equally rare is the decoration of lingzhi sprays, pearl motifs and petal panels only. The form is known as ‘pomegranate shaped’ in Chinese (shiliu zun), probably on account of some likeness of the rim to the crown of sepals of a pomegranate. It appears to have been developed in the Yongle reign (1403-24) and vases of this form are more often found without a reign mark than of Xuande mark and period (1426-35). Prototypes of that form are difficult to find, also in other materials, although the form might have been inspired by earlier metal vessels, such as a melon-shaped silver vase discovered as part of a Southern Song (1127-1279) hoard of gold and silver wares at Pengzhou, Sichuan province, and now in the Pengzhou Municipal Museum, illustrated in Song yun. Sichuan jiaocang wenwu jicui [Selected relics from the Sichuan hoards], Beijing, 2006, p. 198 (fig. 1). The silver vase, however, is lacking the distinctive rim and the splayed foot. In the Yongle period, however, when this shape was first used at Jingdezhen, vases of similar form with a prominent galleried rim and high foot, similarly decorated with lotus petals and with the same triple pearl or jewel motifs at the neck, but flower instead of lingzhi sprays, are often depicted in a Buddhist context. Draped with knotted ribbons and holding a triple flaming jewel on top, they depict the ‘treasure vase’ (bum-pa) of Tibetan Buddhism, one of the Eight Buddhist Emblems. ‘Treasure vases’ represent the inexhaustible vessel and as such symbolise the spiritual abundance of the Buddha. Vases of this type can be seen, for example, on gilt-engraved (qiangjin) lacquer sutra covers of the Yongle period; compare a detail from a sutra cover from the Baoyizhai collection, sold in these rooms, 8th April 2014, lot 38 (fig. 2). Porcelain vases of this shape did not continue to be made beyond the Xuande reign (1426-35), but may have inspired later cloisonné examples, perhaps studded with jewels; see a vase shown to the left of the Tianqi Emperor (r. 1621-7) in an official court portrait, included in the exhibition Power and Glory: Court Arts of China’s Ming Dynasty, Asian Art Museum, San Francisco, 2008, p. 262, cat. no. 149.

Only two or three other blue-and-white vases of this design, of Xuande mark and period, appear to be preserved, one in the Palace Museum, from the Qing court collection, the other in the National Museum of China, both in Beijing, the former illustrated in Geng Baochang, ed., Gugong Bowuyuan cang Ming chu qinghua ci [Early Ming blue-and-white porcelain in the Palace Museum], Beijing, 2002, vol. 1, pl. 100; the latter published in Zhongguo Guojia Bowuguan guancang wenwu yanjiu congshu/Studies on the Collections of the National Museum of China. Ciqi juan [Porcelain section]: Mingdai [Ming dynasty], Shanghai, 2007, pl. 33; possibly a third vase is illustrated in Feng Xianming, ‘Yongle and Xuande Blue-and-White Porcelain in the Palace Museum’, Orientations, November 1987, p. 63, fig. 16.

An unmarked vase of this design in the National Palace Museum, Taiwan, was included in the Museum’s exhibition Mingdai Xuande guanyao jinghua tezhan tulu/Catalogue of the Special Exhibition of Selected Hsüan-te Imperial Porcelains of the Ming Dynasty, Taipei, 1998, no 13. Another unmarked vase, sold in these rooms, 30th October 2000, lot 101, is discussed in Julian Thompson, The Alan Chuang Collection of Chinese Porcelain, Hong Kong, 2009, pl. 8, where he states that the design of these vases was adjusted when the mark was introduced, and that “the unmarked vases have a more domed mouth, shorter neck and a plain curved interior to the foot, whereas the marked vases have a flatter mouth, longer neck and a distinct glazed step inside the footring”.

An example excavated in Beijing and today in the Capital Museum, Beijing, is illustrated in Shoudu Bowuguan cang ci xuan[Selection of porcelains from the Capital Museum], Beijing, 1991, pl. 103. Two unmarked vases of this design from the Wu Lai-hsi collection were sold in our London rooms, 26th May 1937, lots 31 and 32, the former again 16th June 1939, lot 106, from the collection of Major L.F. Hay; one of the Wu Lai-hsi vases is now in the Sir Percival David Collection in the British Museum, London, and was discussed and illustrated together with the present vase in Margaret Medley, ‘Regrouping 15th Century Blue and White’, Transactions of the Oriental Ceramic Society, vol. 34, 1962-63, pl. 9; another from the collection of H.R.N. Norton, sold in our London rooms, 5th November 1963, lot 163, was included in the exhibition Mostra d’Arte Cinese/Exhibition of Chinese Art, Palazzo Ducale, Venice, 1954, cat. no. 630.

The vase comes from the collection of Derek G. Ide (d. 1979), who collected around the same time as Pilkington and equally came from a glass-making family.