LONDON.- International auction house Bonhams is to offer a collection of jewels belonging to an Indian royal family at its Indian and Islamic sale at Bonhams New Bond Street on Tuesday 19th April. The family, who are based in the UK and wish to remain anonymous, will be parting with a number of treasures that have been in their possession for generations, including a South Indian marriage necklace, a jewel encrusted dagger, and extravagant princely jewels such as an emerald and diamond-set belt buckle.

The ‘manga malai’ necklace – one of the highlights of the collection – is composed of linked mango-shaped elements, lavishly set with rubies and diamonds, and estimated at £50,000-70,000. The ‘mango garland’ design is unique to southern India, where the mango is regarded as a symbol of love and fertility. The ‘manga malai’ was worn by women at special occasions such as weddings and also by traditional temple dancers (known as ‘devadasi’ or servants of the god or goddess), who would dedicate their lives to the worship of temple deities in a manner akin to marriage. Similar necklaces can be found in the David Collection in Copenhagen and the Museum of Islamic Art in Doha. composed of forty linked mango-shaped elements, each set with a diamond in the centre surrounded by rubies, surmounted by a ruby and emerald-set floral motif, interspersed with trefoil shaped elements set with rubies and diamonds, the units strung on a flexible flat woven gold cord, the fan-shaped pendant (padakkam) with central octagonal carved emerald surrounded by scrolling floral vines in an open framework, a fringe of gold beads suspended below, the clasp in the form of two addorsed peacocks, verso plain gold - 31 cm. length, 427.4 g.

Note: The manga malai (mango garland) is unique to South India and was traditionally worn for special occasions such as weddings and also by devadasis or temple dancers. The forms of the manga malai are derived from nature. The mango, in Indian mythology, symbolises love. The manga malai has its origins in the Chola period and even earlier, with bronze and stone sculptures adorned with multiple necklaces of similar design. For two comparable illustrations, see U. Balakrishnan, Indian Jewellery - Dance of the Peacock, ill. 229 & 230, pp. 158 – 159.

Examples in museum collections include one in the David Collection, Copenhagen (illustrated in O. Untracht,Traditional Jewelry of India, London 1997, p. 234, no. 494) and others in the Museum of Islamic Art, Doha, the Khalili Collection, London (illustrated in India: Jewels that Enchanted the World, Kremlin Museum, Moscow 2014, exhibition catalogue, nos. 18 & 19)

The dagger is an impressive gem-set enamelled piece decorated with gold, rubies and diamonds. The hilt is of a type rarely produced in Mughal India and finds comparison with 18th century Persian daggers of similar form. It was probably made in Rajasthan, known for its royal workshops and enamelling centres carrying on the Mughal tradition of superlative quality enamelling. There is a similarly decorated hilt in the Nasser D. Khalili Collection in London. Set with a formidable 17th century Ottoman double-edged watered steel blade, it is estimated at £30,000-50,000. the hilt of hourglass shape, gold sheet on lac core, enamelled and set with foiled gem stones in gold mounts including diamonds, rubies and emeralds, central stepped moulding decorated with a band of single rubies in raised circular settings, dividing the hilt in two halves, each half with arched panels decorated with diamond-set buds and accompanying red enamelled leaves, on a dark green enamelled ground, narrow borders with a band of single emeralds in raised circular settings on a red enamelled ground, the circular surface of the top of the hilt with a central diamond and ruby-set flower head surrounded by gold stems from which emanate ruby-set floral motifs, the 17th century Ottoman double-edged watered steel blade of slightly curved tapering form - 40cm. long

Note: This hilt is of a type rarely produced in Mughal India. The quality of the enamelling and the enamel colours suggest that the hilt was probably made in Rajasthan. A complete dagger with a very similarly decorated hilt is in the Nasser D. Khalili Collection of Islamic Art and another classified as Iranian in the State Hermitage Museum, St Petersburg (no. OP-261). See P.M.Carvalho, Gems and Jewels of Mughal India - Jewelled and Enamelled Objects from the 16th to 20th Centuries, London, 2010, pp. 212-213, no. 112.

Examples of two Iranian 18th century daggers with faceted jade hilts of a type on whom our Indian dagger was presumably modelled are illustrated in R. Hales, Islamic and Oriental Arms and Armour, Farnham Common, 2013, nos. 179-180.

Also among the princely family’s treasures is a rare belt buckle set with emeralds and diamonds and estimated at £18,000-£25,000. The front is set with precious stones and the reverse exquisitely enamelled in green and green colours with elegant floral motifs. 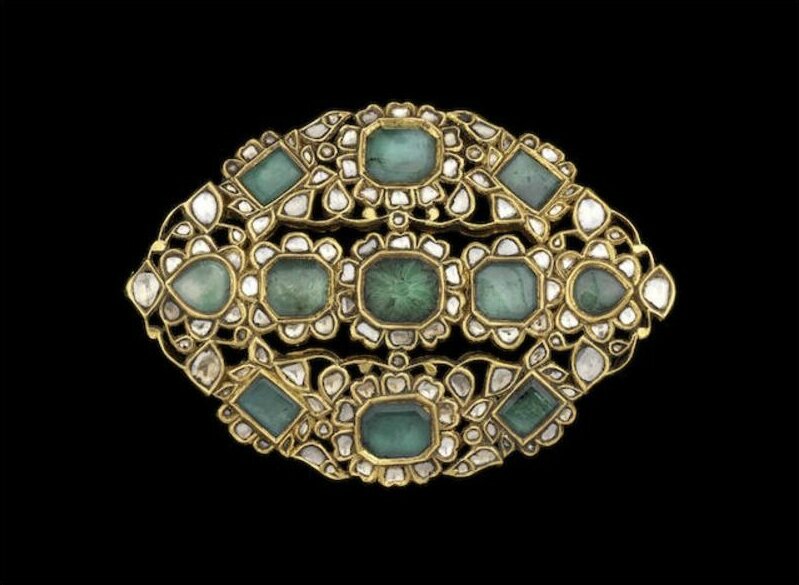 of oval form, set with emeralds and diamonds in gold in an open framework, central octagonal carved emerald with a diamond surround in the form of a flower head, surrounded by smaller octagonal, square and drop form emeralds and diamond floral clusters and scrolling diamond-set foliate motifs, verso enamelled with green and gold floral and foliate motifs, attachment loop with white and green enamelled chevron pattern with a central flowerhead - 8.6 x 6.1 cm., 79.6 g.

A delicate yet magnificent armband will also feature in the sale. A central octagonal diamond is flanked by diamond-set motifs, with the reverse side decorated as attentively as the front with fine enamelling comprising gold scrolling floral motifs on a dark green background. This delicate and quietly beautiful piece is estimated at £8,000-12,000. Haldili forms are often derived from decorative cartouches found on Mughal buildings, manuscripts or on objects framing an inscription, usually religious in nature, as are haldili inscriptions. It was considered that wearing these amulets would control heart palpitations. For comparable illustrations and a note on haldili amulets, see O. Untracht,Traditional Jewelry of India, London, 1997, pg. 104, ill. 172, pp. 116-117.

“This is a treasure trove,” said Rukmani Kumari Rathore, specialist in Islamic and Indian art at Bonhams. “They are magnificent examples of 18th and 19th century craftsmanship and provide a wonderful opportunity to purchase an heirloom once owned by Indian royalty.”