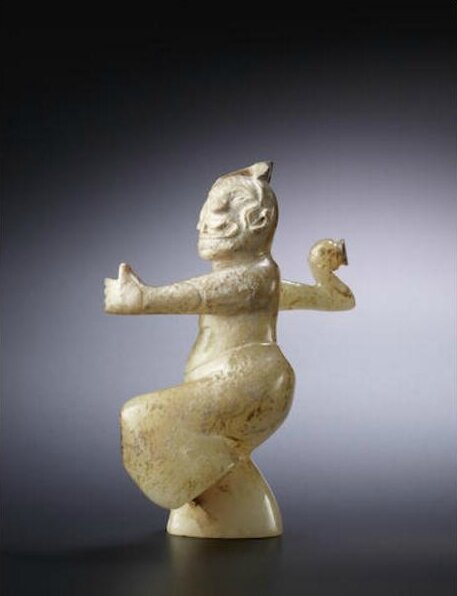 The exceptional collection, mostly pieces never before seen at auction, sold today (5 April, 2016) at the Bonhams Hong Kong Gallery for an unprecedented HK$178,276,250 (GBP16,141,386) including buyer’s premium) with very strong bidding from all over Chinese speaking Asia and active participation from American and European collectors and dealers. The atmosphere in the saleroom was electric with standing room only, and all telephone lines occupied throughout the sale.

Jade has always been regarded by Chinese scholars as ‘the stone of spirit’, and has a cultural resonance among traditional classical Chinese collectors without any equivalence in the West. Since the Neolithic period, it has a spiritual significance (early examples were often found associated with aristocratic burials) and only later did it become valuable fashion and social accessories. The collection was formed in Hong Kong, mostly from the mid-1980s onwards, and reflects this classical and religious significance. Scholarship has been greatly strengthened in recent decades by official excavations in China, and the sale was particularly popular because a number of the lots had been exhibited in the Hong Kong University Museum and Art Gallery in 2006 and were published and illustrated in the accompanying Exhibition Catalogue Art and Imitation in China.

As expected, some of the earliest and rarest figure carvings achieved astonishing prices. The most expensive example, an exceptionally rare figure of a male dancer (Lot 35) dating from the Eastern Han dynasty (circa 100 CSE) multiplied the pre-sale estimate many times to reach a world record price of HK$31,480,000 (GBP2,851,450).

Early jade animal models often include representations of mythical beasts familiar from Spirit Ways leading to traditional tomb sites, and of these beasts the four-legged winged lion-like bixie clearly played an important part in early religious ceremonies and rituals. Two jade examples of these mythical beasts vastly exceeded expectations, a grey and black jade bixie (Lot 33) selling to an Asian buyer for a spectacular price of HK$24,760,000 (GBP2,242,750), while another larger example but with the surface characteristically calcified by burial conditions (Lot 32) soared to an unprecedented HK$21,960,000 (GBP1,989,130). (Cf. my post: A grey and black jade carving of a chimera, bixie, Han Dynasty or later) (Cf. my post: A rare jade carving of a chimera, bixie, Han Dynasty or later)

From early Imperial China’s period was a remarkable carving of a pale green and brown jade elephant and male mahout (Lot 44). The elephant represents strength, wisdom and prudence and an amusing play on its Chinese name provides the auspicious homophone ‘may there be good fortune’. It certainly achieved this for the vendor soaring past the estimate of HK$500,000 – 800,000 to sell for a record HK$19,160,000 (GBP1,735,500), underbid by a large number of buyers attracted by its symbolism and rarity. (Cf. my post: A rare pale green and brown jade carving of an elephant and man, Song Dynasty or later)

Early jade carvings are often produced in fairly simple functional shapes for secular and religious usage. Highlights of such functional shapes included an exceptionally rare yellow-grey and black jade stem cup, Western Han dynasty (BC 206 – AD 9), estimated at HK$ 400,000-600,000 (Lot 38) which sold for a record HK$10,240,000 (GBP927,536). Such cups are associated with the wish for longevity and the search for immortality. (Cf. my post: A pale green and russet jade carving of a mythical beast, 17th-18th century) Exquisitely worked on one side with a fisherman seated on the riverbank with rockwork and a pine tree beneath misty clouds, the reverse with a landscape scene featuring a large trunk of a paulownia tree, carved in raised relief on the right with a seven-character kaishu inscription, the stone of a lustrous white tone. 5.8cm (2 1/4in) high

Note: The inscription reads 松溪隱釣圖，子剛 Songxi yindiao tu, Zigang and can be translated as "fishing on one's own under a pine tree and by a stream, Zigang".

The current lot is exceptional for the quality of the stone and decoration, and ranks amongst the highest quality examples of its type. The most sought-after jade quality is known as 'mutton fat' white jade, or yangzhi baiyu. This rare stone was rare and heavily prized by the Imperial court of the Qing dynasty for its purity and snow-white translucency.

Little is known regarding Lu Zigang in terms of actual evidence, in contrast with his legendary reputation as the finest Suzhou jade carver of all time. According to Craig Clunas's research, Lu's name appeared in the 1642 edition of theGazetteer of Taicang Subprefecture, 太倉州志 Taicangzhou Zhi, recording him as a native of this district, "fifty years ago there was in this prefecture a certain Lu Zigang, whose skill at carving [jade] with the knife remains unsurpassed to the present. Jade hairpins by him sell for fifty or sixty ounces of silver each. The skill was not handed on at Zigang's death"; see C.Clunas, Superfluous Things. Material Culture and Social Status in Early Modern China, Honolulu, 1991, p.64.

Fascination with the landscape subject of a lone fisherman by a stream hidden from plain view amidst pine trees was widespread during the mid-Qing period and found favour in the Qing Court; see for example the Imperial calligraphy on handscroll with Qianlong Yubi calligraphic inscription and impressed seal marks of the Qianlong Emperor,Fishermen in Reclusion among Mountains and Stream by the Ming dynasty painter, calligrapher and poet Tang Yin (1470-1524), in the National Palace Museum, Taipei, accession no.000467N.

Commenting on the unprecedented results of the sale, Xibo Wang, Head of Department, Chinese Ceramics and Works of Art, Hong Kong said: ‘It was a privilege to offer a collection of this exceptional quality comprising such a group of rare early jade carvings and very rewarding to see the excitement it caused amongst jade connoisseurs.’

Asaph Hyman, International Head, Chinese Ceramics and Works of Art, Asia & Europe, commented: ‘The enthusiasm for this exceptional collection proven by the multiple world record prices realised, demonstrated the robustness and depth of the Chinese art market. We are delighted to have been chosen to offer this special collection and look forward to welcoming the public to our forthcoming Chinese art sales in London in May and in Hong Kong in June.’

Colin Sheaf, Chairman of Bonhams Asia, noted that: ‘Bonhams held its first auctions in Hong Kong in 2007 and our business model has evolved since then. We have tracked the way in which the global market in Chinese art is seen to have changed in the last two years. Responding to the changes, we believe that our policy to offer small, carefully chosen selections of fine Chinese art unknown to the market represents the most successful way to develop our market position for the next decade.'