"Drawing, Dreaming and Desire: Works on Paper by Sam Francis" opens at the Norton Simon Museum

"Drawing, Dreaming and Desire: Works on Paper by Sam Francis" opens at the Norton Simon Museum PASADENA, CA.- The Norton Simon Museum presents Drawing, Dreaming and Desire: Works on Paper by Sam Francis, an exhibition that features the artist’s drawings of erotica and the female nude, many on view for the first time. While Francis is renowned for abstract, atmospheric and vigorously colored paintings on a grand scale, these intimate drawings—meditations made visible—in pen and ink, acrylic and watercolor, show viewers a rarely-seen figurative aspect of his oeuvre. Dynamic but little known, this body of work ranges from line drawings of the 1950s to gestural brushstrokes of the 1980s and resonates with significant moments in the artist’s life.

A native of California, Sam Francis (1923–1994) was drafted into the military in 1943 while still a student at UC Berkeley. During Army Air Corp training, he suffered a severe injury that led to a four-year hospitalization. In the midst of his confinement, Francis took up painting and quickly realized he had a passion and a talent for it. In 1950, he departed for Paris, ready to experience life to the fullest, in a new culture, while finding his way as an artist. The vibrant, sensual colors of French art, palpable in the work of Monet and Matisse, stimulated his own predilection for bright, intense colors. A youthful vitality emanates from these erotic drawings of the mid-1950s. The figures, shown in sexual embrace, float in the space of the paper, akin to the islands of color that occupy his paintings. Evident from the works’ calligraphic character is Francis’s early interest in Japanese art and aesthetics, specifically makura-e, or “pillow pictures,” which he is known to have collected. By the end of the decade, Francis had become the first American postwar painter to win serious acclaim in Europe. Courted by major dealers, collectors and museum curators, he was exhibiting his work on two continents and in four countries. In 1958, he completed the monumental triptych known as the Basel Mural for the Kunsthalle in Basel, Switzerland (one panel and two fragments from a second panel are part of the Simon collections). But illness struck Francis in 1961, necessitating another hospitalization for most of the year in Bern, Switzerland. Perhaps the amorous couples that Francis drew while he was bedridden suggest the weight of this new setback. In contrast to the nimble figures of his work in the 1950s, the massive forms in these works hover between abstraction and figuration and swell to the edges of the paper as though struggling against its bonds.

The colossal energy that suffused the artist’s abstract paintings informed his frank, and sometimes provocative, depictions of the female nude from the 1980s. During these productive years in California (where he would marry his fifth wife and welcome a son), he employed the brush with a strength and vigor matched by his new passion for creating monotypes. The pigment trickles and twists across the paper. Splashes of paint confirm the physicality of the artist wielding his brush. The generative, sensual impulse found in his paintings invigorates these drawings and offers reason enough for their existence. Francis once said that “each painting is like my body print, taken at different moments of my life.” This sentiment is germane to the works displayed in Drawing, Dreaming and Desire, which, because of their intimate nature, provide insight into his psyche. His sustained attention to line, its descriptive and decorative power, offered a counterbalance to his abstractions, an aesthetic release for an artist whose public acclaim centered on the diffused surfaces of his bold abstractions.

Drawing, Dreaming and Desire: Works on Paper by Sam Francis is organized by Curator Gloria Williams Sander. The seventeen works presented in the exhibition are part of a larger donation of the artist’s drawings by the Sam Francis Foundation in 2012, and this exhibition is the first opportunity for the public to see them. It is on view in the Museum’s small rotating gallery on the main level from Friday, April 8 through Monday, July 25, 2016. 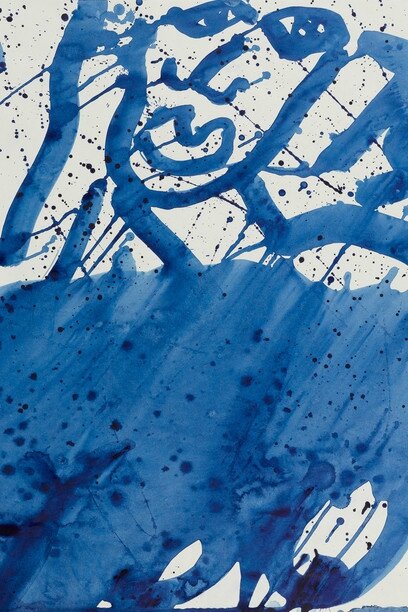