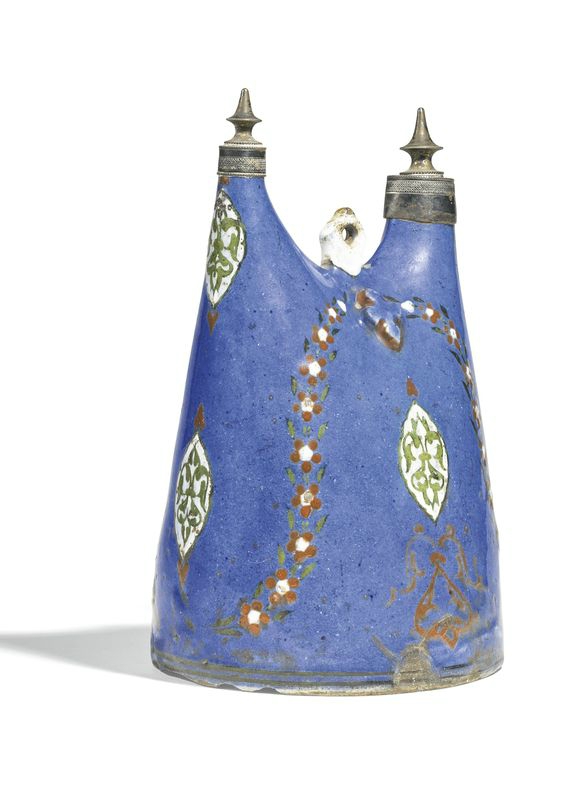 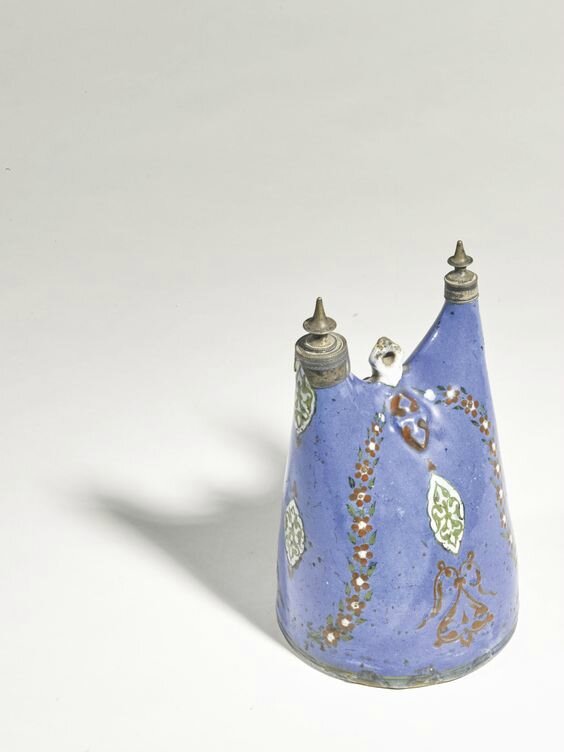 the round base tapering towards two short spouts with a small protruding loop between, decorated with painted underglaze over a lavender blue ground in white, green and red with floral garlands, lobed medallions containing split-palmettes and arabesque motifs, each spout with later metal mounts with screw-fixed terminals.

Note: This matara represents a rare discovery as only one other Iznik matara is known. Published on multiple occasions, and sold at Sotheby’s on 24 April 2013 (lot 241) as a ‘unique Iznik pottery flask’, the other matara was until now considered to be the only example of the matara in Iznik.

Deriving its particular shape from early leather forms made of the hind quarters of a quadruped, the form, which was of humble, nomadic origins, was copied throughout the Ottoman world in ceramic, metal, and even rock crystal. Just as the matara which previously sold at Sotheby’s, now in the Omer Koç collection (see Bilgi 2015, pp.432-3, no.193), was decorated with a rare marble-like pattern across its body, the present matara also has an unusual lavender-coloured ground. Belonging to a short-lived and specific period in Iznik production, such coloured slips, in beige, lavender and dark orange, required skill and knowledge on behalf of the potters and were experimented with over a very short period, between 1560 and 1575. These dates provide a rough terminus ante-quem for the dating of the present piece.

Two close examples of this form in rock crystal are in the Topkapi Saray Museum, contemporary in date to this Iznik matara and mounted in gold, inv. nos. TKS 2/484 and TKS 2/474 (see Atil 1987, p.129, no.60 and Atasoy and Raby 1989, p.277, no.633). These rock crystal flasks attest to the courtly status attained by the matara, and further derivations of this shape were produced, also in luxury media, some of which even known to have been sent to Russia and Poland as Imperial gifts.

The design, notably the continuous curving stem of prunus flowers is quite close to a number of Iznik-wares in which such long prunus-blossoms dominate or frame a work. In this case, the flowers themselves are quite stylised, possibly-due to the nature of the slip and working with red on a lavender ground. The same effect, in which the petals are represented by painted dots, is apparent on another dish with a reddish-brown ground in the Museo Calouste Gulbenkian (inv. no. 773, see Ribeiro 1996, p.155, no.35). The white lobed medallions containing a design of split-palmettes which appear on several places on the present matara are also apparent on another lavender-ground dish in the Chateau d’Écouan (inv. no.E.CI.8550 (DS2225)). A further example of such split-palmette motifs is on a water bottle with an orange-slip ground with lavender and white designs originally in the mosque of Sultan Selim II in Edirne (completed in 1574-75) now in the Çinili Köşk Museum, Istanbul (see Atasoy and Raby 1989, pp.241-1, no.450).

The cross-shape in relief with palmette terminals on each side of the matara also echoes the design on a leather Ottoman matara of the sixteenth century now in the National Museum in Warsaw (inv. no. SKAZsz 2270), pointing towards a common repertoire of motifs for such Ottoman works of art (see Istanbul 1999, p.115, no.14). of characteristic form with two short tapering spouts and a curved handle, a raised ridge bisecting the body vertically, decorated in underglaze red, cobalt blue and green with an overall marbling pattern; 17.8cm.

Note: This extraordinary rarity owes its form to a leather vessel made from the hind quarters of a quadruped, the two spouts imitating the projecting legs. Though unique to this object in pottery, the form is familiar from its appearance in other elevated media. In what is perhaps a typically Ottoman approach, the form of a humble utilitarian object is imitated in a number of luxurious materials in this period. Notable examples of this are two flasks of this form in the Topkapi Saray Museum, both contemporary to the Iznik matara and both carved from rock crystal and mounted in gold (illustrated in Atasoy and Raby 1989, p.277, no.633, and Atil 1987, p.129, no.60). The marbling pattern of this Iznik example may itself be intended to suggest carved stone, the raised ridge playing the role of a mount. Where marbling is used in an architectural context, such as on the tilework of the Rüstem Pasha Mosque in Istanbul, it clearly has this suggestive intent.

The ‘hanap’ or tankard form, see lot 243, is another example of the use of a day-to-day form reworked as a luxury object. Rather than for their lowly status, it may be speculated that these forms are prized as traditional and therefore are celebrated as a self-conscious historical allusion just as a reverence for tents, albeit rather grand ones, continued long after the building of luxurious palaces. Whatever the significance of these borrowings, it is clear that the use of forms and designs from other media was frequent in the later reign of Murad III (1574-95). The appearance of forms such as the conical tankard and the so-called ‘animal style’, both derived from Balkan silverware, is another notable occurrence of this practice in this period of Iznik production (see Atasoy and Raby 1989, p.276, nos.615-621, and p.256).