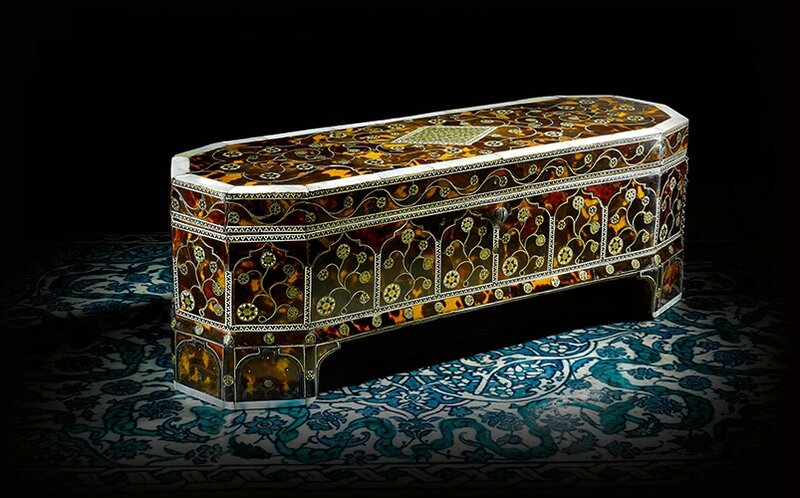 of irregular decagonal form supported on two broad bracket-form feet, the exterior revetted with tortoiseshell plaques with brass wire settings, the long and short sides with a continuous blind arcade of ogee-shaped arches each enclosing a floral repeat of wavy stems issuing stylised flower-heads in the form of khatamkariroundels made up of stained ivory tesserae in white, green and black, the lid with a frieze decorated ensuite with khatamkari florets on an undulating stem set between micro-mosaic bands of miniature black and white tesserae, the cover with a large khatamkari diamond-form cartouche in the centre surrounded by tortoiseshell revetment with khatamkari florets on wavy brass wire stems bordered with rectangular mother-of-pearl fillets, the hinged cover secured by a silver chain opening to reveal a refurbished red-ground interior with a removable tray and a fixed compartment to one side all later-painted with gold arabesques and fitted with a later metal inkwell; 13 by 35.2 by 11.6cm.

Provenance: Formerly in a European private collection, the property of an ambassador to Turkey, reputedly received as a gift from the Ottoman sultan in the nineteenth century.

Note: This unparalleled box appears to have been a unique commission made for an individual of refined taste and high rank. Its decoration is characteristic of a richly eclectic period of Ottoman art in the mid/late-sixteenth century when artistic influences were assimilated from its newly-conquered territories and beyond, to the furthest reaches of its vast trading imperium. Exploiting this unprecedented influx of ideas, materials and techniques, the maker arrives at a glorious synthesis of design elements fusing Safavid, Mughal, Mamluk and even Chinese influences in the creation of a highly original work of art.

As with other Ottoman luxury objects from this period, the box evinces a strong degree of experimentation. Of particular note is the use of exotic tortoiseshell revetment backed with metal foil, popular in Mughal India and widely used on furniture made for the Indo-Portuguese market, but still a rarity in Ottoman Turkey at this time. The closest parallel amongst the group of extant late-sixteenth-century Ottoman courtly objects is a beautiful book-cover in Istanbul University Library (inv. no. IUK F.1426; see Rogers and Ward 1988, pp.117-18, no.53) which uses a comparable wire inlay technique bordering tortoiseshell plaques. The binding, like the box, makes extravagant use of an exotic material but in other ways conforms closely to the Ottoman court tradition with standardised ogival cusps defining the four shaped corner-pieces; a variant of this same design also appears on the lid of the box.

The scale of the box is also noteworthy. At first glance, one is struck by the size and shape - it is quite large for its purpose - suggesting that it was not intended for travel, but rather was probably made to be offered as a gift or as a private commission for a high-ranking individual. Only a handful of related pieces survive amongst the select group of early Ottoman furniture and works of art to which this box belongs. A distant cousin is a box of rectangular shape with a flat lid with a tortoiseshell and mother-of-pearl design bordered by geometric bands of bone and metal attributed to the second half of the sixteenth century which sold in these rooms, 13 April 2000, lot 97. A further example in the Badisches Landesmuseum, Karlsruhe (Zähringer Stiftung, inv. no. D 243) attributed to the first half of the seventeenth century shares with the present example an irregular decagonal form but uses a domical rather than flat lid, representing a later variant of the form as it evolved in the course of the seventeenth century.

The most quintessentially 'Ottoman' element of the decoration is the pairing of two very distinct types of arch: a lower arch of stylised 'candlestick' or 'bell jar' form with idiosyncratic profile stepped-up at the centre, paired with an upper arch with an inverted 'tent-like' top. This exact combination can be seen in Ottoman interior design of the second half of the sixteenth century, notably, the Shehzade Mustafa Turbesi in Bursa (1553), which features precisely the same pairing of arches (see fig.1) set amidst Iznik floral tiles with counterpoised wavy stems which in turn echo the curve and counter-curve of the floral design on the present piece. The minor bands of minute tesserae of ivory, wood and metal, is a recurring feature of Ottoman design, such as on the sumptuous Qur’an cabinet dated to the first half of the sixteenth century from the Turk ve Islam Museum (acc. no.5) (Museum of Turkish and Islamic Art, Akbank, Cultural and Art Publications, 2002, pp.254-5). The plainness of the interior of this otherwise sumptuously-decorated cabinet gives an indication of how the interior of our box might have looked before its later refurbishment. The Turk ve Islam cabinet, as well as a second architectonic Qur’an cabinet in the same museum also dating to the same period (acc. no.2) (ibid. pp.258-9), attests to the existing use of miniature bands of black and white micro-mosaic work. The present example uses the latter feature beautifully across the cover, sides and base of the box unifying the design and raising it to a higher level of refinement and sophistication.

The khatamkari work seen on the present box is a technique that originated in Persia, most probably Shiraz and Isfahan, and travelled throughout the Middle East and India, influencing numerous works. Very fine ivory and bone 'baguettes' are sliced and placed and set into fine cavities, usually in a wooden object. An Ottoman wooden quiver now in the Topkapi Saryi Museum (inv. no.1/10463) features a subtle and restrained design comprising related panels of khatamkari work including green-stained ivory, bone and wood. The quiver is one of only three known examples that survive: two in the Topkapi Saray Museum (inv. nos.1/10463 and 2/451) and one in the Bayerisches Armeemuseum in Ingolstadt (inv.79) (see Topkapi à Versailles: Trésors de la Cour ottomane, Paris 1999, p.55, no.20). Another late-sixteenth-century courtly object which incorporates khatamkari diamond-form cartouches within borders of black and white tesserae is the domed Qur’an cabinet, once kept in the mausoleum of Sultan Mehmed III (d. 1603) and now housed in the Turk ve Islam Museum (acc. no.13) (see:ibid. p.74, no.35). All of these comparanda confirm the presence of craftsmen skilled in the khatamkari technique present in late-sixteenth-century Turkey at work on prestigious commissions at the behest of the Ottoman court.

The use of exotic marine tortoiseshell is first found on Ottoman pieces dating to the early half of the sixteenth century but does not appear to have become popular until after 1550.  Its adoption at this time can be ascribed to the direct access of the Ottomans to the sea trade routes from the Indian Ocean following the fall of the Mamluks and Ottoman expansion into the Hijaz and exploration into East Africa and even attempts at an Indian conquest where an Ottoman expeditionary force ended up in permanent residence at the Gujarati court.

The combination of tortoiseshell and wire inlay is unusual but not unique. The closest comparandum, already referenced above, is the court book-binding made up of tortoiseshell plaques laid down on metal foil with cloisons of silver wire dated to circa 1560 in Istanbul University Library (inv. no. IUK F. 1426, Rogers and Ward 1988, pp.117-18, no.53). It was common practice to apply the tortoiseshell plaques over a metal foil to give an added lustre, as seen on both the binding and the present pen-box. The use of mother-of-pearl also become more prevalent at this time due to the expansion of trading links into the Indian Ocean, and in the latter half of the sixteenth century, tortoiseshell and mother-of-pearl came to displace ivory in importance as fashionable materials prized for luxury items (London 1988, pp.156-7). The wire-inlay technique, using either gold, silver, brass or another metal begins in Turkey in the sixteenth century and went on to be practised widely throughout the Ottoman world, also drawing inspiration from luxury imports. Jewels, furniture, arms and armour as well as scribal boxes were increasingly decorated in this fashion. An early piece in Topkapi Saray Museum which exploits this same wire inlay technique is an Ottoman ebony pen case dating to the second-half of the sixteenth century (see Topkapi Palace, Akbank Culture and Art Directorate, Istanbul, 2000, p.244-5).

Bold in design and confident in execution, and making use of exotic materials and exotic techniques, this box is a courtly object par excellence comparable to some of the finest surviving works in Topkapi Saray. A testimony to Ottoman opulence and taste which welcomed artistic influences through trade, this exceptional box is an incomparable item of the highest aesthetic and historical interest. Its appearance on the market both broadens and deepens our knowledge and appreciation of the richness of the Ottoman artistic legacy, whilst offering a rare opportunity for an institution or private buyer to acquire a major piece of museum-quality importance.