Jan Breughel II (Antwerp 1601-1678), The annual kermis in the town of Schelle, with the artist and his family in the foreground

Jan Breughel II (Antwerp 1601-1678), The annual kermis in the town of Schelle, with the artist and his family in the foreground 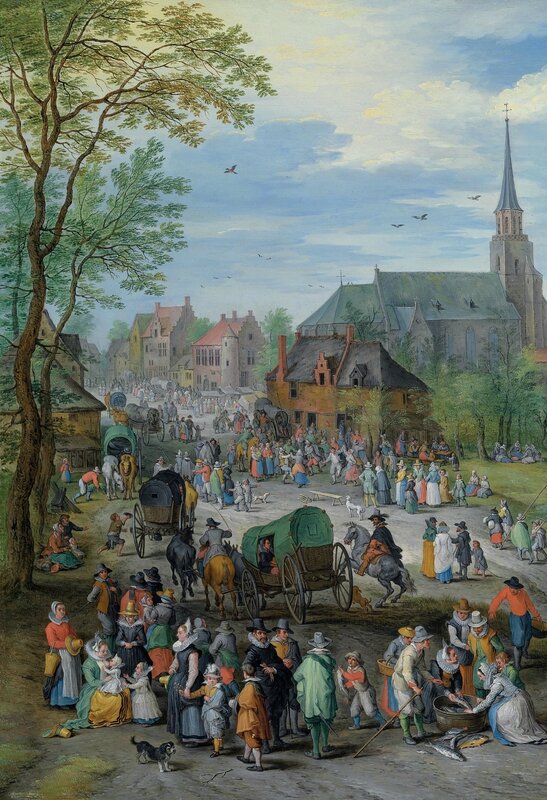 Provenance: Major J. Godman; Sotheby's, London, 25 November 1970, lot 103 as 'Jan Brueghel the Elder' to the following.
with Frost & Reed, London, as 'Jan Breughel the Elder'.
Anonymous sale; Bonham's, London, 6 July 2005, lot 34, as 'Attributed to Karel Beschey', but with a catalogue note stating 'Dr. Klaus Ertz has recently confirmed his attribution to Jan Breughel the Younger on inspection of the original, suggesting the picture dates to before the end of the 1630s (verbal communication, 20th of April 2005)', where acquired by the present owner.

Note: Bustling with life and activity, this village kermis by a river depicts the annual celebration that took place in the town of Schelle, just south of Jan Breughel II's native Antwerp, on the day of the consecration of the church of Saint Peter and Saint Paul, whose robust gothic silhouette and slender spire dominates the picture. The edifice also appears in a village scene by Jan Breughel I in the Hermitage Museum, Saint Petersburg. The eldest son of Jan Breughel I, Jan II received his training in his father's studio. Following the unexpected death of his father during a cholera epidemic in 1625, Jan II returned to Antwerp from Palermo, where he had been sojourning with his childhood friend, Anthony van Dyck, and took over the running of the studio. As might have been expected, the artist's output was greatly influenced by his father's style and prototypes.

Such is the case with the present composition, which was inspired by a panel of slightly smaller dimensions, signed and dated 1614 by Jan Breughel I, now in the Kunsthistorisches Museum in Vienna. In both pictures, the group of elegantly dressed figures in the foreground has been identified as Jan Breughel I and his family. The elder Jan appears to the right, clad in black attire and white ruff and holding a glove. Seen from the back is Jan II as a boy. Looking left is the profile of Jan I's second wife Catarina, who holds her son Pieter by the hand, while her daughter Elisabeth turns to her infant sister suckling at a seated nurse. These lively likenesses are indebted to Peter Paul Rubens’ masterful group portrait The Family of Jan Breughel the Elder (The Courtauld Gallery, London).

Commentaires sur Jan Breughel II (Antwerp 1601-1678), The annual kermis in the town of Schelle, with the artist and his family in the foreground