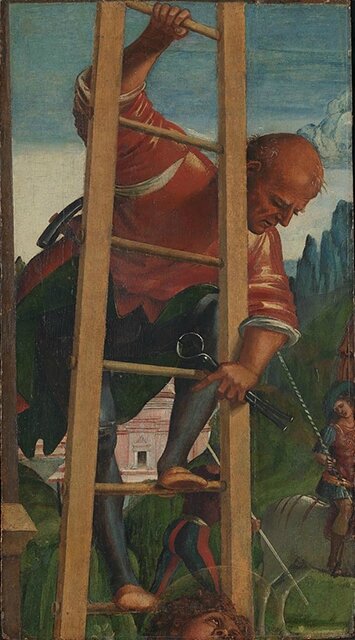 LONDON.- Man on a Ladder by Luca Signorelli, one of the most important central Italian Renaissance painters and a contemporary of Raphael and Michelangelo, has been allocated to the National Gallery under the Acceptance-in-Lieu scheme.

Originally part of a vast altarpiece depicting the Lamentation at the Foot of the Cross commissioned in 1504 for the church of Sant’Agostino in Matelica, a town in central Italy, the large panel was subsequently cut into separate pieces for sale to different purchasers. Man on a Ladder is one of six known fragments of this altarpiece. The others are currently housed in museums and collections around the world, including the Museo Civico, Bologna, the National Gallery of Art, Washington DC, and private collections in Genoa, Rome and England. Man on a Ladder is the only fragment that can be seen in a UK public collection.

Man on a Ladder depicts the figure of a man who carries a pair of pliers which have been used to remove the nails from the crucified Christ. It is thought to come from the upper section of the now dismembered altarpiece. The full composition showed the dead Christ at the foot of the cross, mourned by his mother and his followers. The haloed head of Saint John the Evangelist is just visible at the lower edge of Man on a Ladder.

Born in Cortona, a cousin of the artist and art historian Giorgio Vasari and a pupil of Piero della Francesca, Luca Signorelli has been largely forgotten by art historians of the twentieth and twenty-first centuries. In his day he was an extremely successful painter, celebrated for his skill in depicting the human body and his mastery of foreshortening. The painting is a superb example of the unique figurative style for which Signorelli was famed.

The first documented owner of Man on a Ladder - the arts patron and politician Sir William Graham - loaned the painting to the Pre-Raphaelite painter and designer Sir Edward Burne-Jones, who had a special interest in the works of Signorelli.

Man on a Ladder joins a group of eight paintings by Signorelli in the National Gallery. With this acquisition, which shows Signorelli’s extraordinary talents as a painter of the human body in complex poses, the Gallery can now represent this important Renaissance painter’s inventive talents at their best. Man on a Ladder also plays a key role in demonstrating the development of the representation of the human figure in Renaissance painting, constituting a bridge between fifteenth-century artists like Perugino and Piero della Francesca and those of the High Renaissance at the beginning of the sixteenth century.

Caroline Campbell, National Gallery Jacob Rothschild Head of the Curatorial Department said “Luca Signorelli is one of the most underappreciated artists of the Italian Renaissance. This muscular figure demonstrates the two qualities central to his work: his mastery of design and interest in the human form.”

National Gallery Director, Dr Gabriele Finaldi said “Thanks to the allocation to the National Gallery of ‘Man on a Ladder’ through the Acceptance in Lieu scheme, the public can now see the full range of Signorelli’s artistic achievement on show in Trafalgar Square.”

Man on a Ladder can now be seen in Gallery 60 of the Sainsbury Wing hanging alongside other important Signorelli paintings in the collection such as The Adoration of the Shepherds and The Holy Family.