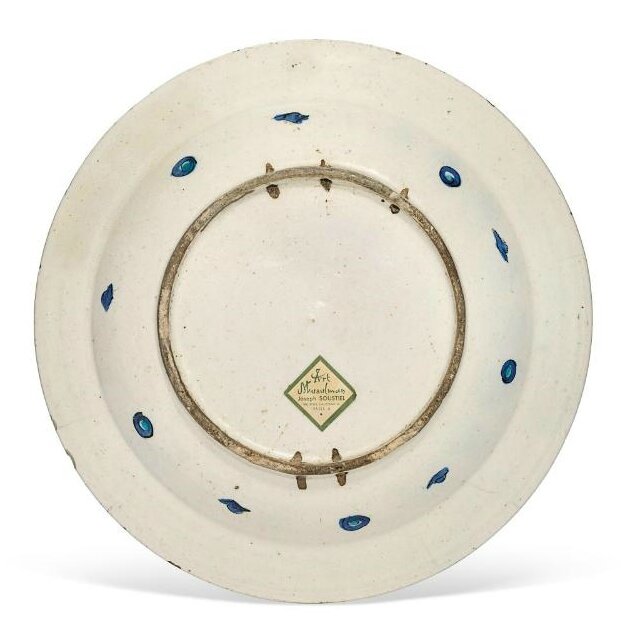 With sloping rim on short foot, the white ground decorated in cobalt-blue, turquoise, bole-red and black with central cusped medallion containing a floral spray and bordered by small palmettes, the medallion framed with sprigs of turquoise flowerheads all on a striking ground of dense scrolls, the border with wave-and-rock motif, the exterior with alternating roundels and lozenges, repaired breaks, foot drilled, old collector's label to the underside; 12¼in. (31.1cm.) diam.

Note: This striking dish is unusual for the ground of kaleidoscopic tight black scrolls upon which the design is set. In the 1570s and 80s it became popular in Iznik to enliven the background of vessels. The most common means of doing this was the fish-scale motif, seen for instance on the jug sold in these Rooms, 25 April 2013, lot 227. Another device however were scrolls such as these, familiar from contemporaneous wave-and-rock borders. Our dish relates very closely to one in the Victoria and Albert Museum. It similarly uses the bed of black scrolls, although there they are confined within a central roundel and therefore the overall effect is not quite as dramatic as ours. The V&A dish also has a very similar border of scrolls punctuated by s-motifs with palmette terminals. It also uses the same strong turquoise, although there combined with a green. The V&A dish is dated by Nurhan Atasoy and Julian Raby to circa 1590 (Nurhan Atasoy and Julian Raby, Iznik. The Pottery of Ottoman Turkey, London, 1989, no.499, pp.248-49).

Another Iznik dish which employed similar aesthetic was originally part of the R.W.M. Walker Collection, sold in these Rooms, 25-26 July 1945, lot 98 - later published by Bernard Rackham, Islamic Pottery and Italian Maiolica, London, 1959, no.186, pl.84, p.44. There it was dated to the early 17th century, though it has later been re-attributed to circa 1570-80 (Atasoy and Raby, Iznik. op.cit., no.722). On both dishes the potters play with the balance of white space (on ours a central cusped medallion, on the Rackham dish a large rosette) against the busy background of scrolls, to great effect.