The impoverished dervish of Faryab crosses the river on his prayer mat. The painting, Safavid Isfahan, circa 1600, ...

The impoverished dervish of Faryab crosses the river on his prayer mat. The painting, Safavid Isfahan, circa 1600, ... 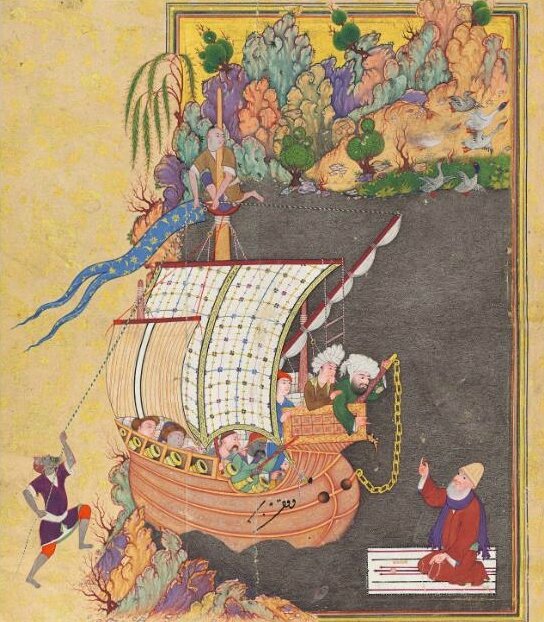 An illustration from the Bustan of Shaykh Muslih al-Din Sa'di, opaque pigments heightened with gold on paper, the dervish Faryab kneels on a flat-woven prayer rug that floats on a silver river, following a sailboat full of astonished observers including Sa'di, pairs of ducks take flight in upper right-hand corner before a rocky landscape, gold and polychrome rules on margins with gold outlined scrolling floral arabesques inhabited with birds, the reverse with four columns, each with 21ll. of elegant black nasta'liq on gold paper, salmon coloured margin with gold-speckled decoration, margin with seal impressions, very minor creases. Text panel 7 3/8 x 4¼in. (18.7 x 10.8cm.); folio 11 3/8 x 7 3/8in. (28.5 x 18.5cm.)

Engraved: The seal impression is that of the Shrine at Ardabil, it reads, vaqf-e astane-ye motabarrake-ye safaviyye-ye safiyye …, 'Waqf of the blessed Safavid shrine of Safi...'. The date, partly legible here is AH 1017/1608-09 AD.

Note: This scene depicts the poet Sa'di and a dervish from Faryab who arrive at a river in the Maghreb at the same moment. Sa'di had a dirham with which he paid for his crossing. The dervish however had no money and was left behind. During the crossing Sa'di felt some remorse at the dervish's fate. When he heard laughter however he turned to see the Dervish crossing the river upon his prayer rug.

The production of the manuscript from which our folios come follows, in many respects, the narrative of a copy of Farid al-Din ‘Attar’s Mantiq al-Tayr copied by Sultan ‘Ali Mashhadi which is now in the Metropolitan Museum of Art in New York (inv.63.210; Maryam D. Ekhtiar, Priscilla P. Soucek, Sheila R. Canby and Navina Najat Haidar (eds.),Masterpieces from the Department of Islamic Art in the Metropolitan Museum of Art, New York, 2011, no.127, pp.188-90). The Metropolitan Museum’s Mantiq al-Tayr is dated to the first day of the fifth month of the year AH 892, corresponding to the 25th of April 1487 AD, and contains paintings attributed to the pre-eminent Timurid artist Behzad. In addition to this it includes four illustrations which date to period of the Safavid Shah ‘Abbas I (r. 1588-1629). The paintings which were added at the court of Shah ‘Abbas I are painted almost in keeping with the style of the earlier Behzadian paintings, as if the artists were trying to maintain the original essence of the manuscript. A similar story can be seen in our manuscript, which has obviously had Shah ‘Abbas era paintings added to an earlier core. This archaistic style can be seen to a greater extent in the painting offered in the following lot.

This painting however demonstrates a remarkable hybrid - combining the intricate detail of a Behzadian painting, for instance in the rocks on the horizon, with certain notably Shah ‘Abbas period features such as the large turban worn by the passenger just behind Sa’di on the prow of the boat. This distinctive turban is echoed in a depiction of an execution scene attributed to the early 17th century in the Metropolitan Museum Mantiq al-Tayr (inv. 63.210.3; Marie Swietochowski, ‘The historical background and illustrative character of the Metropolitan Museum's Mantiq al-Tayr of 1483’, in Richard Ettinghausen (ed.), Islamic Art in The Metropolitan Museum of Art, New York, 1972, fig.I, p.43I). Another striking feature the design of the boat itself. It is depicted with three masts, a windsock, a rectangular raised prow and most notably a row of cannons. These features are all echoed in the depiction of a boat in a Shahnamamanuscript produced for Shah ‘Abbas and attributed by Basil Robinson to the artist Aqa Riza, dated to the late 16th century (A.J. Arberry, B.W. Robinson, E. Blochet, J.V.S. Wilkinson, Catalogue of Persian Manuscripts in the Chester Beatty Library, Vol.III, Dublin, 1962, ms.277, pl.42). The combination of the turban design here with the depiction of the ship suggest that our painting was completed around 1600.

The form of the rocks, coloured in rich shades of purple, blue and tan, show a certain debt to painting produced during the period of Behzad at the Timurid court over a century earlier. It is probable that the court artist who painted this scene was responding to other illustrations in the original manuscript. The shared spirit of these rocks and even the treatment of the textured water of our painting can be closely compared with those found in a 15th century depiction of the tale of the bearded man who fell into the river from the Metropolitan Museum’s Mantiq al-Tayr (inv. 63.210.44; Swietochowski, op.cit, 1972, p.59, fig.23). It is also interesting to note that the artist has chosen to depict a Shi’a dervish as identified by the hexagonal clay prayer tablet or turba found on the front of his prayer mat. This confirms we are firmly within the Shi’a religious dominance of the Safavid world. Our painting is a spectacular and rare testament to how accomplished artists working at the atelier of Shah ‘Abbas were successfully able to blend elements of Timurid masters together with the modern style of their own era.

Commentaires sur The impoverished dervish of Faryab crosses the river on his prayer mat. The painting, Safavid Isfahan, circa 1600, ...