King Jamshid writes on a rock. The painting, Safavid Isfahan, circa 1600, the calligraphy by 'Ali Al-Husayni Al-Katib, Timurid..

King Jamshid writes on a rock. The painting, Safavid Isfahan, circa 1600, the calligraphy by 'Ali Al-Husayni Al-Katib, Timurid.. 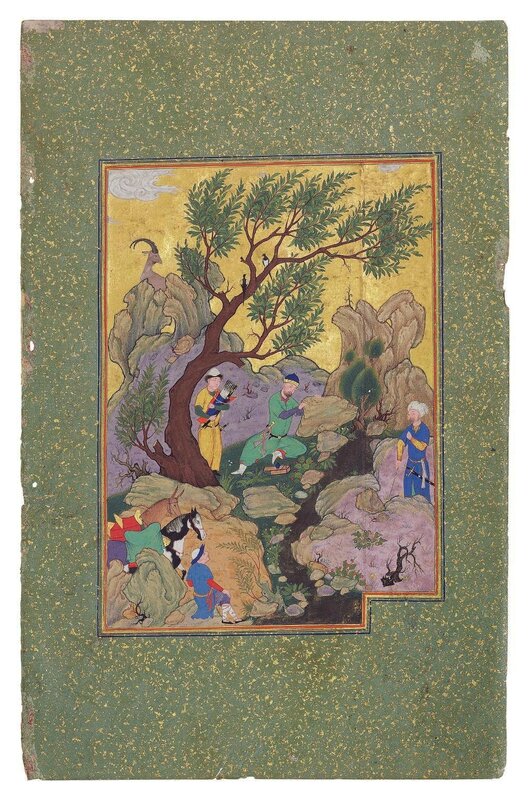 An illustration from the Bustan of Shaykh Muslih al-Din Sa'di, opaque pigments heightened with gold on paper, King Jamshid, pen in hand, inscribes a text on a rock, attendants look on, one holds a sheath of arrows, sitting before two horses, around them a lyrical background with a silver stream flowing from rocky outcrop and a large tree inhabited by magpies swaying before a golden sky, laid down within polychrome rules on wide gold-speckled blue margins, reverse with four columns of 16ll. of elegant horizontal and diagonal nasta'liq on gold-sprinkled paper, elegant gold-speckled marbled paper margins, one seal impression. Painting 7 x 5¼in. (18 x 13cm.); folio 11¼ x 7¼in. (28.5 x 18.5cm.)

Engraved: The seal impression is that of the Shrine at Ardabil, it reads, vaqf-e astane-ye motabarrake-ye safaviyye-ye safiyye …, 'Waqf of the blessed Safavid shrine of Safi...'. The date, partly legible here is AH 1017/1608-09 AD.

Note: This lyrical painting depicts a scene from the first chapter of Sa'di's Bustan:

"I heard that King Jamshid, of happy nature,
Wrote on a stone, at a fountain-head:
At this fountain many like us took rest;
They departed in death, just as the eyes twinkled.
With manliness and force they took the world;
But they took it not with themselves to the tomb.
They departed, and each one reaped what he sowed:
There remained only good and bad fame."

This painting successfully demonstrates the adaptability of the pre-eminent court painters working in the Royal atelier of Shah ‘Abbas. From an initial glance the work might well be attributed to the late 15th rather than the early 17th century. The river emerging out of a rocky outcrop in the upper section of the right hand margin and separating the lower right hand corner from the rest of the composition is particularly reminiscent of earlier royal Timurid compositions. This is seen in an illustration to a manuscript of Nizami in the British Library dated 1494-95 AD (Inv. Or.6810; Marie G. Lukens and Ernst J. Grube, ‘The Language of the Birds’, in The Metropolitan Museum of Art Bulletin, Vol.XXV, No.9, May 1967, no.21, p.329). The archaic sensibilities of the landscape are paralleled in an illustration of ‘The Christian Maiden and Shaykh San’an’ in the Metropolitan Museum’s Mantiq al-Tayr of 1487 AD which was also completed in Isfahan in circa 1600 (Inv. 63.210.22; Lukens and Grube, op.cit., May 1967, no.1, p.341). The figure of the Christian Maiden in the comparable work with her oval-shaped head, strong eyebrows and prominent nose is typical of what would be expected of the Isfahan school of painting at the turn of the 17th century. This contrasts with the figures in our painting which are intended to closely follow earlier Behzadian figures of the Timurid era.

A remarkable feature of this folio are the marbled paper margins which were added around the calligraphy in circa 1600. This distinctive polychrome marbled paper sprinkled with gold can be found in the same form and in other colour variants in the Metropolitan Museum’s Mantiq al-Tayr. Marbled paper with intense colours is more commonly associated with the Deccan or Mughal India and these margins thereforeoffer a rare insight into the production in the early Safavid period.

A painting in the Metropolitan Museum’s Mantiq al-Tayr of the ‘Concourse of the Birds’ which is signed by Habibullah of Sava and painted in circa 1600 shares many of the same accomplished archaistic representations of both nature and humansas in our painting (inv.63.210.11; Maryam D. Ekhtiar, Priscilla P. Soucek, Sheila R. Canby and Navina Najat Haidar (eds.), Masterpieces from the Department of Islamic Art in the Metropolitan Museum of Art, New York, 2011, no.127D, p.189). Clearly accomplished as an artist, Habibullah of Sava was known both his ability to faithfully reproduce scenes in the Behzadian style, as well as for following the fashion of the Isfahan school exemplified by Reza ‘Abbasi. He was active during the reign of Shah ‘Abbas. The contemporary chronicler Qazi Ahmad wrote in 1596 that ‘with regard to art he became a ravisher of the souls of his contemporaries’ (V. Minorsky, Calligraphers and Painters, A Treatise by Qadi Ahmad, son of Mir Munshi, Washington, 1959, p.191). Habibullah, originally from Qom, travelled to Herat with his patron Husayn Khan Shamlu, where his skill drew the attention of the future Shah ‘Abbas during his time as governor of the city. Shah ‘Abbas later appropriated the services of Habibullah and a number of other painters and calligraphers to join him first at his court in Qazvin and later at Isfahan. It is highly likely that the artist of this present work followed the same trajectory as Habibullah in travelling from Herat via Qazvin to Isfahan.

Ernst Grube in commenting on the four 17th century paintings added to the Metropolitan Museum Mantiq al-Tayrsuggests that the overall archaistic style of the paintings was not as a result of wanting simply to honour the Timurid artists of previous generations, but rather a more general revival of the Timurid style at the Safavid court which commenced around 1600. A later example of this Timurid revival is a Shahnama manuscript copied for Shah ‘Abbas in 1614 now in the New York Public Library (Lukens and Grube, op.cit., May 1967, no.11, p.349). That Shahnamafaithfully follows illustrations from another Shahnama produced for the Timurid Prince Baysunghur in Herat in 1430. These later Timurid revival works are more stylised than our painting with the rock formations and flowering plants still highly detailed in design but less accurate and not as refined as their Timurid antecedents. It is highly important to note that these later Timurid revival works, unlike ours and the 17th century paintings in the Metropolitan Museum’sMantiq al-Tayr, were not part of Shah ‘Abbas’ endowment to the dynastic shrine at Ardebil. The presentation of the best artistic works available to the dynastic shrine was a crucial way in which Shah ‘Abbas demonstrated his power of kingship.

Commentaires sur King Jamshid writes on a rock. The painting, Safavid Isfahan, circa 1600, the calligraphy by 'Ali Al-Husayni Al-Katib, Timurid..