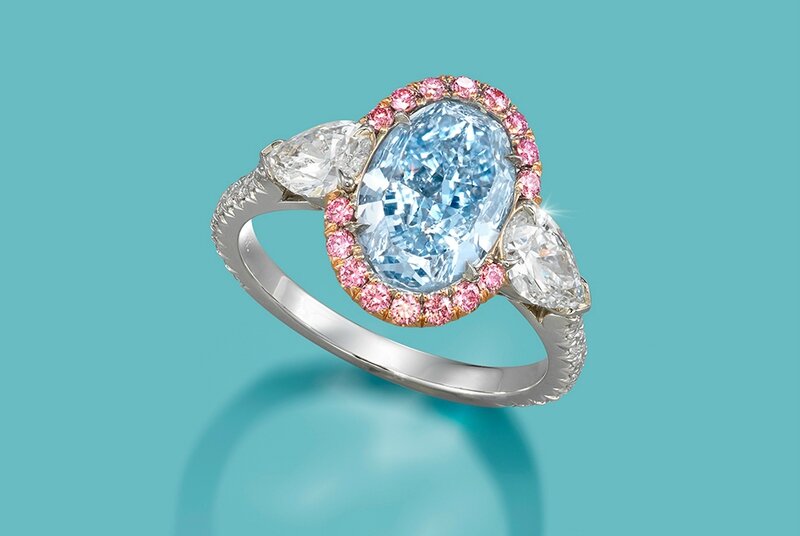 HONG KONG.- A magnificent selection of rare coloured diamonds, Art Deco jewellery, and impressive signed pieces by houses such as Bulgari, Harry Winston and Van Cleef & Arpels, are set to go under the hammer at Bonhams Rare Jewels and Jadeite Sale in Hong Kong on 1 June 2016.

Blue Diamonds
Leading the sale is a 3.04ct Fancy Intense Oval-Shaped Blue Diamond, with a clarity grade of VS2, estimated at HK$17,000,000-20,000,000. Blue diamonds are rare, accounting for less than one per cent of all diamonds mined. Infrequently offered at auction, they have mesmerized royalty and celebrities over the centuries, one example being the famous blue 'Hope Diamond' bought by King Louis XIV of France in the late 17th Century. This blue diamond was discovered in its rough form in early 2014 at the Rooipoort Mine in Northern Cape Province, South Africa, where discoveries of this kind are so rare that they make for only 0.1% of the mines production. 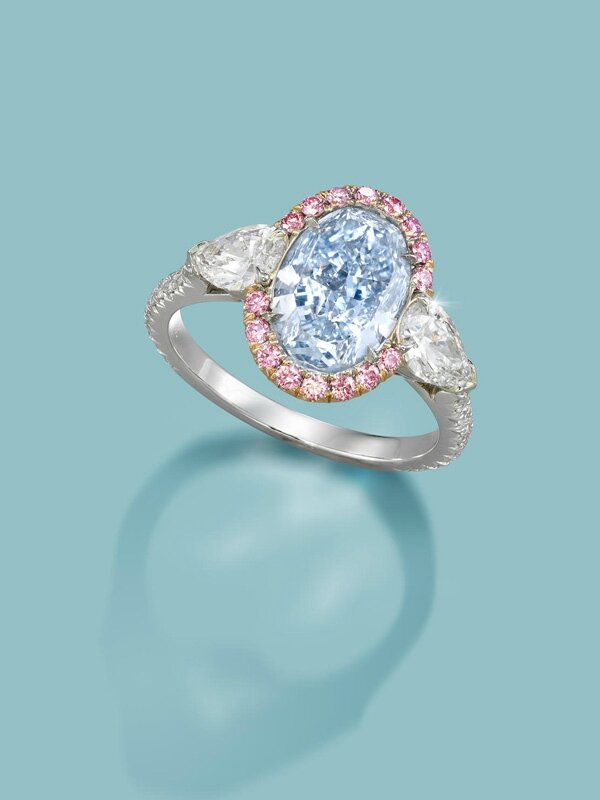 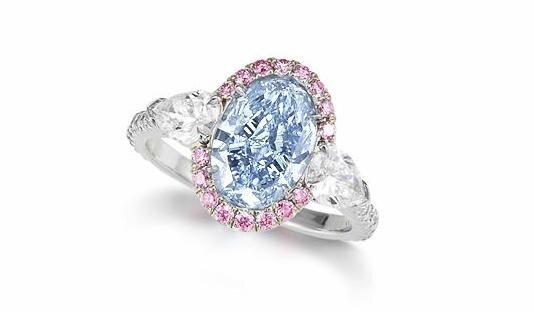 Accompanied by a GIA report stating that the diamond is natural Fancy Intense Blue colour and VS2 clarity. Report number 1172314769, dated 11 September 2015.

Notes: Art of Nature - The Journey of The 3.04 Carat Fancy Intense Blue Diamond

Natural colour diamonds have long been valued for their rarity – coveted by many but owned by few. In the world of luxury products, natural colour diamonds are likened to works of art, hidden treasures, and rare books. They speak the language of exclusivity, desirability, and collectability.

Scott West is one of the world's most distinguished houses for rare and exotic natural coloured diamonds. The family's history spans over five decades and is a story of expertise, dedication and innovation.
Scott West's grandfather, Max, started his career as a commodities dealer in the heart of New York City's diamond district in the early 1950s. With a keen sense of adventure, Max began travelling to distant points in Africa, Asia, Europe and South America, looking for sources of desirable metals, diamonds and gemstones. Max soon transformed his business into an exclusive distributor of diamonds, thriving in an evolving market.
After Max passed away his son, Larry West, inherited the family business at the young age of 21. Over time, Larry used his tremendous skill to consolidate their inventory into larger, finer quality diamonds, by re-polishing and cutting them to diminish internal imperfections and improve the life and colour held deep within each stone.
In the 1980s, Larry travelled to Australia and learned of natural pink diamonds being discovered at the, then, unknown Argyle Mine. Whilst working with these natural wonders, he found that improving their colour increased their value far more than it did colourless diamonds. It was then that Larry decided to dedicate his entire business to exceptionally rare coloured diamonds.
Larry's son, Scott, joined the family business in 2007. Like his grandfather and father before him, Scott has adapted the business to thrive in an ever-changing market. Today, Scott West, holds one of the most important collections of natural coloured diamonds in the world.

Pink Diamonds
Also featured in the sale is a rare 3.05ct Fancy Pink Diamond, estimated at HK$8,000,000- 10,000,000. Diamonds get their colour from chemical impurities that absorb light – yellow diamonds contain traces of nitrogen, and blue diamonds contain boron – yet it is it not certain how the mysterious pink diamond gets its colouring. It is hailed as one of the rarest hues to be found in diamonds, with approximately 1 in 10,000 carats of mined diamonds true gem quality fancy coloured diamonds. Of this small amount, just 0.01% are fancy pink diamonds, and only a handful of these are over 2 carats. 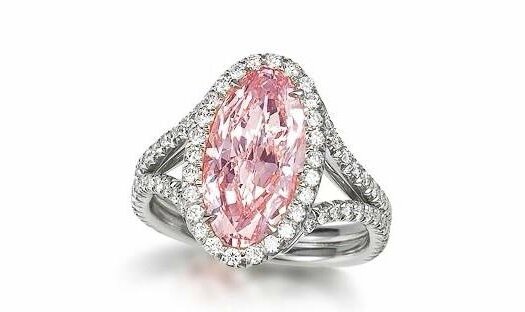 Accompanied by a GIA report stating that the diamond is natural Fancy Pink colour and VS2 clarity. Report number 5131605758, dated 29 February 2016.

Signed Jewellery
The sale also features a number of signed pieces, including an impressive Art Deco diamond necklace by Bulgari. Art Deco jewellery from the 1930s is incredibly rare. The necklace offered, circa 1935, is set with over 88 carats of diamonds, and estimated at HK$ 2,500,000-3,500,000. Notes: Bulgari
Luxury Italian jeweller Bulgari is synonymous with bold and sumptuous jewels masterfully set with dazzling gemstones in a variety of precious metals. Indeed, in Rome of the 1950s and 60s, the glamorous age of La Dolce Vita, Bulgari was the go-to jeweller for visiting fashionable society and celebrity royalty. Richard Burton said of his wife, the great actress Elizabeth Taylor: "The only Italian word she knows is Bulgari."

Bulgari was founded in the late 19th century by a Greek émigré, Sotirio Bulgari, initially as a purveyor of silver and traditional gold jewellery in archaeological revival style. By the 1920s the focus was firmly on producing superior jewels that were influenced in design and quality craftsmanship by the great French jewellery houses, Paris being the pivot of the jewellery world.

During the 1930s, Bulgari embraced the trend towards "white" jewellery whereby coloured gems were rejected in favour of colourless diamond jewels set in platinum. During this period, fashionable collar necklaces, such as this, were formed of repeating geometric motifs offset with white diamonds of different cuts. It is interesting to note that what set Bulgari's diamond necklaces apart from their Parisian counterparts was how they were punctuated by large diamonds. The collar necklace offered here is a rare example from Bulgari's period of Art Deco production. Accompanied by a SSEF report stating that the natural emerald has no indications of clarity enhancement and originates from Colombia. Report number 85222, dated 21 March 2016. Accompanied by a SSEF report stating that the 7.02 carat natural sapphire has no indications of heat treatment and originates from Kashmir. Report number 81352, dated 5 August 2015.

Accompanied by a Gubelin report stating that the 7.02 carat natural sapphire has no indications of heat treatment and originates from Kashmir. Report number 14120106, dated 16 December 2014.

Accompanied by a SSEF report stating that the remaining ten natural sapphires have no indications of heat treatment and originate from Kashmir, Burma (Myanmar), Ceylon (Sri Lanka) and the Basaltic deposit. Report number 81353, dated 5 August 2015.

Fine Jadeite
Several spectacular pieces of fine Jadeite are also offered in the sale. The auspicious gemstone, which is loved and admired throughout Asia,is always popular. Highlights include a spectacular diamond and jadeite 'Leaf' Pendant, estimated at HK$ 500,000-700,000, as well as a cabochon jadeite and diamond ring, estimated at HK$750,000-950,000, and a fine jadeite bangle, estimated at HK$2,000,000-2,800,000. 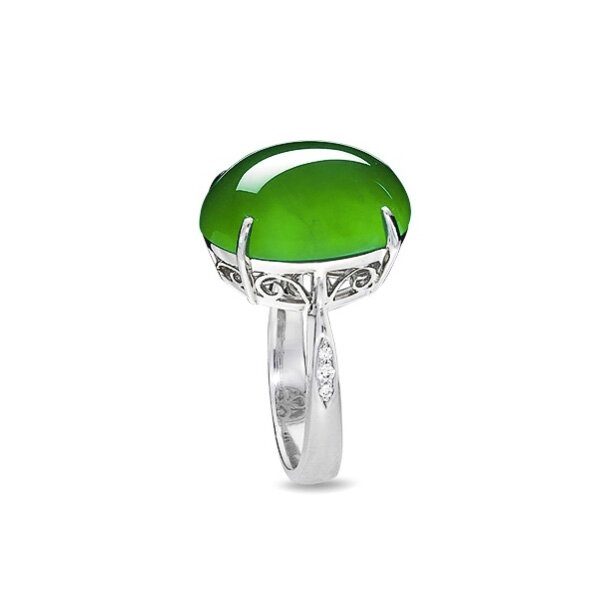