LOS ANGELES, CA.- The Getty is presenting a major exhibition on the spectacular Buddhist cave temples located near Dunhuang, an oasis in Northwest China on the ancient Silk Road. Visitors will immerse themselves in the art and history of the Mogao Grottoes, an extensive cave temple complex and UNESCO World Heritage site, which thrived as a Buddhist center from the 4th to the 14th centuries.

“This major exhibition, unprecedented in scope, is the first in North America to fully explore the art, environment, and conservation of the Buddhist cave temples of Dunhuang. The Mogao site, located on the edge of the Gobi Desert, is a testament to a thousand years of religious, commercial, and cultural exchange along the trade routes linking East and West, collectively known as the Silk Road,” says James Cuno, president and CEO of the J. Paul Getty Trust. “The exhibition highlights the Getty’s long relationship with the Dunhuang Academy, stewards of the site, as well as our ongoing efforts to preserve the world’s cultural heritage.” Exploring the history of the cave temple site from its founding in the 4th century, to its abandonment in the 14th century, to its revitalization in the 20th century, the exhibition offers three complementary experiences. A temporary building on the Getty’s plaza houses three full-scale, hand-painted replica caves, filled with exquisite Buddhist painting and sculpture.

The Getty Research Institute galleries exhibit over forty objects discovered at Mogao in 1900 in Cave 17, known as the “Library Cave.” Rarely if ever seen in the United States, these stunning works reflect the diverse ideas, beliefs, and artistic styles of China and the Silk Road in the 8th, 9th and 10th centuries. The art displays the co-mingling of major cultures—Greek and Roman via Ghandaran India, Middle Eastern and Persian, Indian and Chinese. A multimedia experience comprises the third part of the exhibition. New 3D stereoscopic immersive technology, never before used in a museum exhibition, will enable visitors to examine in detail the magnificent sculpture and painting of Cave 45. This 8th-century cave exemplifies the artistic brilliance of Chinese art of the High Tang period (705-781).

The exhibition also focuses on the modern history of the Mogao cave temples at Dunhuang, highlighting the Getty Conservation Institute’s work in partnership with the Dunhuang Academy to address the preservation challenges of this singular site.

“The Foundation is proud to be part of this unique project, which reflects our core mission to expand knowledge of Buddhism and Chinese culture as well as facilitate mutual understanding between East and West,” said Ted Lipman, Chief Executive Officer of The Robert H. N. Ho Family Foundation. “In collaboration with leading international institutions, academics, conservators and other specialists, The Getty has developed an unprecedented opportunity for audiences outside China to experience the wonders of Dunhuang, which served as the nexus for great cultures, ideas and creativity for more than a millennium.” 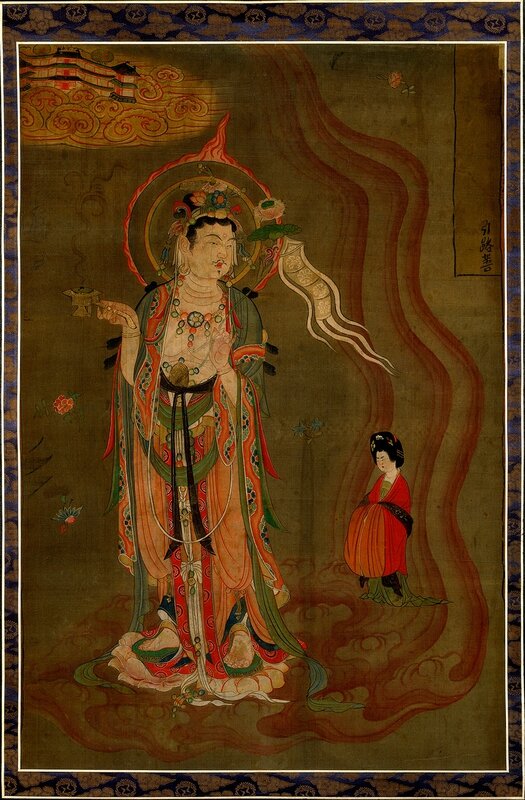 Cave Temple Conservation
Over a thousand-year period, the cave temples at Mogao were hand-carved into a cliff face of alluvial conglomerate rock. The walls were plastered with a mixture of clay collected from the local riverbed, sand, and plant fiber, and decorated with extraordinary wall paintings that depict Buddhist religious imagery, as well as scenes of everyday life. For centuries, the site has endured in a stark desert environment that still threatens to damage or destroy the wall paintings and sculpture.

Since 1989, the Getty Conservation Institute has worked with the Dunhuang Academy on the conservation and management of the site, with the first years of collaboration focusing on research and site stabilization. Since 1997, work has focused on the development of a site master plan, conservation of wall paintings, training, and visitor management. The collaboration has included a model project in Cave 85, a large and beautifully decorated ninth-century cave temple. The project determined causes and mechanisms of wall paintings deterioration and developed conservation solutions adaptable to other cave temples at the site, as well as at other Silk Road locations.

“The extent of wall paintings at the site is equivalent to a wall 15 feet high and 6 miles long— an enormous and complex conservation project to undertake,” says Neville Agnew, senior principal project specialist at the Getty Conservation Institute. “The scale of the site led to an approach that favors preventive conservation, and the Dunhuang Academy has taken care to manage several factors of deterioration, including controlling the number of visitors to the site to prevent damage from humidity and physical contact with the paintings.”

Unique Artifacts on Display
The exhibition in the Getty Research Institute galleries includes 43 manuscripts, paintings on silk, embroideries, preparatory sketches, and ritual diagrams loaned by the British Museum, the British Library, the Musée Guimet, and the Bibliothèque nationale de France—objects that have rarely, if ever, traveled to the United States. A highlight of the exhibition is the Diamond Sutra (a sacred Mahayana Buddhist text) that dates to the year 868 CE. On loan to the Getty from the British Library, the Diamond Sutra is the world’s oldest dated complete printed book.

The exhibition features objects from the Library Cave, where more than 40,000 objects, sealed up for a millennium, were discovered in 1900. Shortly thereafter, explorers from Britain, France, Russia, Japan, and the United States came to Dunhuang, where they obtained thousands of these objects to take to their home countries.

“Cave Temples of Dunhuang presents a significant artistic site and related objects which provide a broad comprehension of the creative, intellectual, and spiritual environment of early medieval China, as well as the considerable cultural impact of the transmission of Buddhism along the Silk Road,” says Marcia Reed, chief curator at the Getty Research Institute. “The exhibition also illustrates the dynamic way that a combined knowledge of art history and conservation science can work together to deepen our collective knowledge and safeguard world heritage.”

Focusing on the diversity of languages and religions on the Silk Road, the first exhibition gallery features a Buddhist sutra in Tibetan with commentary in Chinese, a Jewish prayer in Hebrew, and a Christian manuscript in Chinese, all written no later than the 10th century. The exhibition demonstrates how Buddhist texts prescribed rules governing artistic practice, displaying a stunning group of freehand sketches, pounces, and woodblock prints from the Library Cave. Superb early Chinese paintings on silk portray scenes from the life of the Buddha, Buddha preaching, and a bodhisattva leading an elegant Tang lady toward a paradisiacal afterlife. All illuminate how commissions of paintings created personal connections with the divine for their patrons, while ritual diagrams instruct on precisely how to create a sacred space. “These exquisite Buddhist works, originally from Dunhuang, were created not as works of art, but rather as forms of devotion to accumulate merit and ensure a better afterlife,” says Mimi Gardner Gates, director emerita of the Seattle Art Museum and chairman of the Dunhuang Foundation.

To illustrate the life of a wall painting and trace its 1,100-year history—from creation to deterioration and conservation—the exhibition includes a recreated portion of a wall from Cave 85. Exhibition videos describe the history and significance of the Mogao site, as well as modern conservation efforts. Reproductions of photographs by Western explorers and others document early 20th-century investigations of the Mogao caves, including the discovery of the Library Cave. The site’s revitalization in the 20th century, under the stewardship of the Dunhuang Academy, concludes the exhibition. Cave Replicas
The Getty Center arrival plaza houses three full-size replica caves providing visitors with a deeper understanding of the Mogao site and the scale of the cave temples there. In China, the traditional view of replication differs from that of the West, because copying is considered an important way to master traditions of Chinese painting. The replica caves, created by artists from the Dunhuang Academy’s Fine Arts Institute, were constructed through a painstaking, multiyear process that includes photographing and printing images of the caves’ walls at their original scale, tracing the images with pencil, and then contour-line drawing on top of the tracing. Clay from the local riverbed is used to make the base for the painting of the primary pigments. The paintings are then mounted on the inner surface of the replica cave’s wooden framework, which has been crafted to the exact dimensions of the original cave.

The replicated cave temples span the 5th to the 8th century. Cave 275 features a large central image of Maitreya, Buddha of the future, as well as five painted stories of the Buddha’s past lives. The earliest dated cave, Cave 285 was created in 538 CE and 539 CE. The brilliantly colored, dynamic wall paintings incorporate Hindu and indigenous Chinese deities into a Buddhist context. Dating from the 8th century or Tang dynasty, Cave 320 has a magnificent ceiling with a central peony motif, surrounded by decorative tent hangings and numerous small Buddhas.

“We are pleased to partner with the Getty and the Dunhuang Academy to bring this monumental exhibition to Los Angeles. As the financial bridge between East and West, we believe the core of all exchanges, whether it is financial, trade, or business, comes from understanding and appreciating each other’s culture,” says Dominic Ng, Chairman and CEO of East West Bank. “This exhibition showcases the rich cultural exchange that took place between East and West more than a thousand years ago.” Multimedia Experience
The exhibition is accompanied by two multimedia galleries, which will visually immerse visitors in the Mogao site. The first section includes a large panoramic projection with an overview of the Mogao cave temples in their stark desert setting. In the second section, visitors will use 3D glasses to experience stereoscopic images of Cave 45, a finely decorated High Tang cave with a seven-figure sculpture group that is one of the treasures of Mogao. This marks the first time that this particular 3D stereoscopic technology has been used in a museum exhibition.

“Looking back over the years of our work with the GCI for the better conservation and management of the Mogao Grottoes, I feel a great sense of satisfaction at our achievements," says Fan Jinshi, director emerita of the Dunhuang Academy. "Now with this exhibition we again undertake something new and challenging. For the first time, a major exhibition on the cave temples of Dunhuang with their world famous art and artifacts will be on display in the United States. This exhibition will create bridges across continents and culture and bring to American audiences and the large Chinese communities of California and beyond the glories of the site to which I have devoted my life." 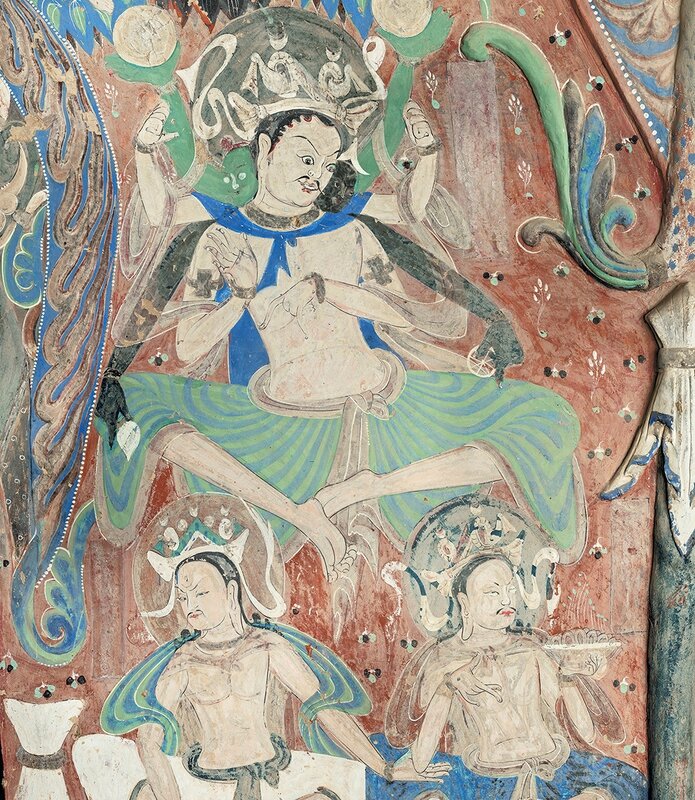 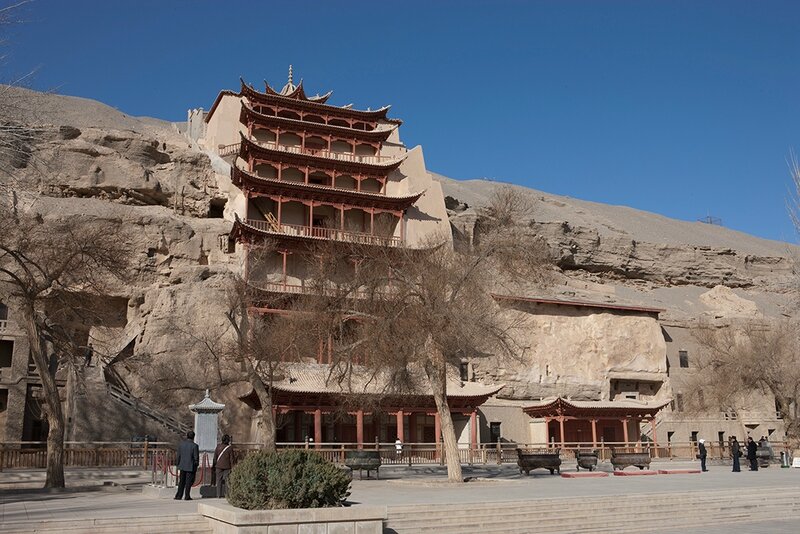 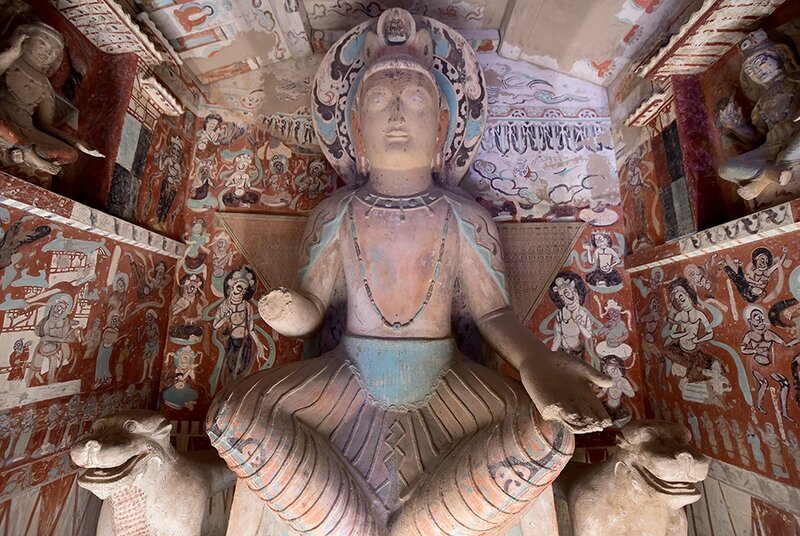 The Bodhisattva identified as Maitreya from Mogao cave 275 is seen at the "Cave Temples of Dunhuang: Buddhist Art on the Silk Road" exhibit at the Getty Center in Los Angeles on May 9, 2016 where full-scale, hand-painted replicas of the famed Mogao Cave are on display. The exhibtion opened on May 7 and runs until September 4, 2016. FREDERIC J. BROWN / AFP. 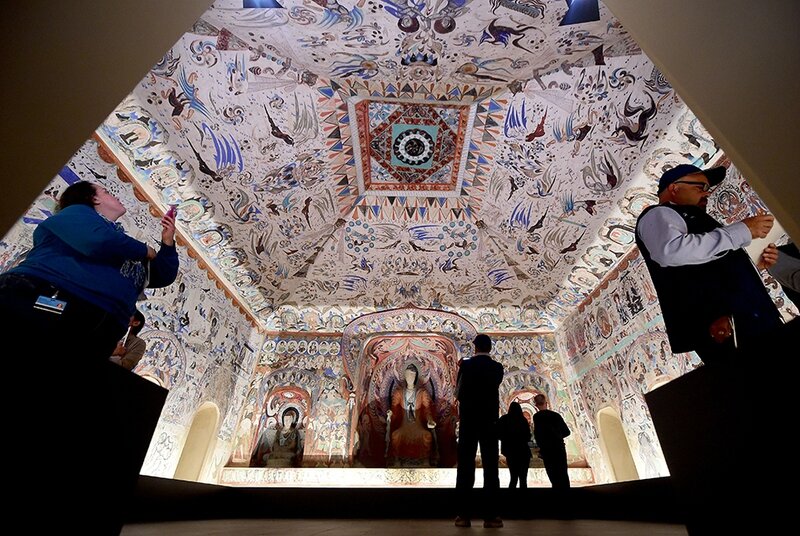 People visit the "Cave Temples of Dunhuang: Buddhist Art on the Silk Road" exhibit at the Getty Center in Los Angeles on May 9, 2016, viewing a full-scale, hand-painted replica of Mogao Cave 285, known for its pyramidal ceiling with a square zaojing/caisson. The exhibtion opened on May 7 and runs until September 4, 2016. FREDERIC J. BROWN / AFP.