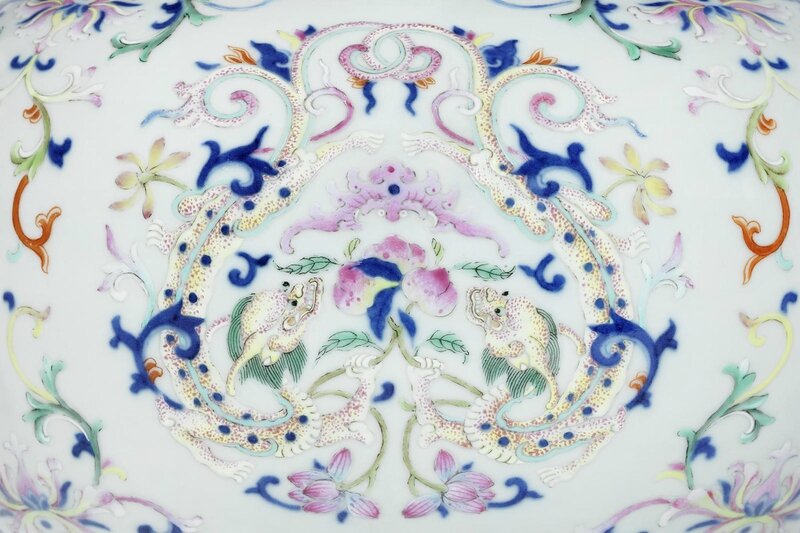 The vase finely potted with a compressed, globular body rising from a short spreading foot to a tall waisted neck and flared mouth, vividly decorated in shaded pastel tones of pink, yellow, green, purple and underglaze blue with four panels each depicting a pair of confronted scrolling chilong grasping at fruiting branches of peaches below hovering bats, amidst lotus blooms and buds issuing from scrolling foliage with undulating vines and tendrils, all set between a ruyi collar around the shoulders and lotus lappets at the foot, the neck similarly decorated with a leafy lotus strapwork above a band of key-fret and classic scrolls.

Provenance: an English private collection, and thence by descent

Notes: Incorporating Western techniques and Chinese traditional designs, the present vase is a remarkable example of the ability of craftsmen during the Qianlong period. The so-called 'Western Colours' palette (yangcai 洋彩), was highly regarded by the emperor, as well as the delicate shading for the flowers and the pointillist technique that created a three-dimensional effect to the animals. The Rococo-inspired curling leaves and feathery pointed petals, further expression of the emperor's penchant for exoticism, are skilfully combined with powerful Chinese symbols such as dragons, emblematic of Imperial sovereignty and lotus flowers symbolic of purity and peaches, underscoring wishes for immortality.

A related vase, Qianlong seal mark and of the period, decorated with the same unusual colour palette and techniques as the present lot is illustrated in The Complete Collection of Treasures of the Palace Museum. Porcelains with Cloisonné Enamel Decoration and Famille Rose Decoration, Hong Kong, 1999, pl.95.