Sunken Cities: Egypt’s Lost Worlds will be at the British Museum from 19 May to 27 November 2016.

LONDON.- The British Museum is staging a major exhibition on two lost Egyptian cities and their recent rediscovery by archaeologists beneath the Mediterranean seabed. On view for an extended run of six months, The BP exhibition Sunken cities: Egypt’s lost worlds is the Museum’s first large-scale exhibition of underwater discoveries. It shows how the exploration of Thonis-Heracleion and Canopus – submerged at the mouth of the River Nile for over a thousand years – is transforming our understanding of the relationship between ancient Egypt and the Greek world and the great importance of these ancient cities. Sunken Cities: Egypt’s Lost Worlds will be at the British Museum from 19 May to 27 November 2016.

300 outstanding objects have been brought together for the exhibition including more than 200 spectacular finds excavated off the coast of Egypt near Alexandria between 1996 and 2012. Important loans from Egyptian museums rarely seen before outside Egypt (and the first such loans since the Egyptian revolution) are supplemented with objects from various sites across the Delta drawn from the British Museum’s collection; most notably from Naukratis – a sister harbour town to Thonis- Heracleion and the first Greek settlement in Egypt.

Likely founded during the 7th century BC, Thonis- Heracleion and Canopus were busy, cosmopolitan cities that once sat on adjacent islands at the edge of the fertile lands of the Egyptian Delta, intersected by canals. After Alexander the Great’s conquest of Egypt in 332BC, centuries of Greek (Ptolemaic) rule followed. The exhibition reveals how cross-cultural exchange and religion flourished, particularly the worship of the Egyptian god of the afterlife, Osiris. By the 8th century AD, the sea had reclaimed the cities and they lay hidden several metres beneath the seabed, their location and condition unclear. Although well-known from Egyptian decrees and Greek mythology and historians, past attempts to locate them were either fruitless or very partial. Thanks to the underwater setting, a vast number of objects of great archaeological significance have been astonishingly well preserved. Pristine monumental statues, fine metalware and gold jewellery reveal how Greece and Egypt interacted in the late first millennium BC. These artefacts offer a new insight into the quality and unique character of the art of this period and show how the Greek kings and queens who ruled Egypt for 300 years adopted and adapted Egyptian beliefs and rituals to legitimise their reign. Lying in state … the statue of a Ptolemaic pharaoh travels through the streets of Alexandria. Photograph: British Museum.

The exhibition features a number of extraordinary, monumental sculptures. A 5.4m granite statue of Hapy, a divine personification of the Nile’s flood, greets visitors as they enter the space. Masterpieces from Egyptian museums such as the Apis bull from the Serapeum in Alexandria are being shown alongside magnificent recent finds from the sea. One such piece is the stunning sculpture from Canopus representing Arsinoe II (the eldest daughter of Ptolemy I, founder of the Ptolemaic dynasty). The Greco-Macedonian queen became a goddess beloved to both Egyptians and Greeks after her death and is depicted here as the perfect embodiment of Aphrodite, a goddess of beauty ‘who grants fortunate sailing’. ‘Kallias dedicated me to Aphrodite’ … the sixth-century hunter and his piglets, a Naukratis find. Photograph: Trustees of the British Museum.

The exhibition also covers the arrival of Greeks in Egypt, when they were hosts and not rulers; privileged but controlled by the pharaohs. A complete stela from Thonis-Heracleion advertises a 380BC royal decree of the Egyptian pharaoh Nectanebo I. It states that 10% of the taxes collected on all goods imported from the ‘Sea of the Greeks’ into Thonis-Heracleion and on all trade operations at Naukratis were to be donated to an Egyptian temple. A wide range of objects, from modest to grand and costly, bears witness to the piety of both inhabitants and visitors at these major religious centres. Lead models of barges uncovered in the sacred waterway linking Thonis-Heracleion to Canopus are unique and moving finds. They are associated with the Mysteries of Osiris, the most popular festival celebrated annually across Egypt during the month of Khoiak (mid-October to mid- November). Ranging in size from 6 to 67cm, these reproduce in metal a flotilla of 34 papyrus barges that would have been displayed on a waterway to celebrate the first sacred navigation of the festival. According to religious texts, each barge was to measure 67.5 cm and to bear the figure of an Egyptian god, and would have been illuminated by 365 lamps. The lead barges are lasting testimonies possibly left by people who, long ago, celebrated this festival in the Canopic region. 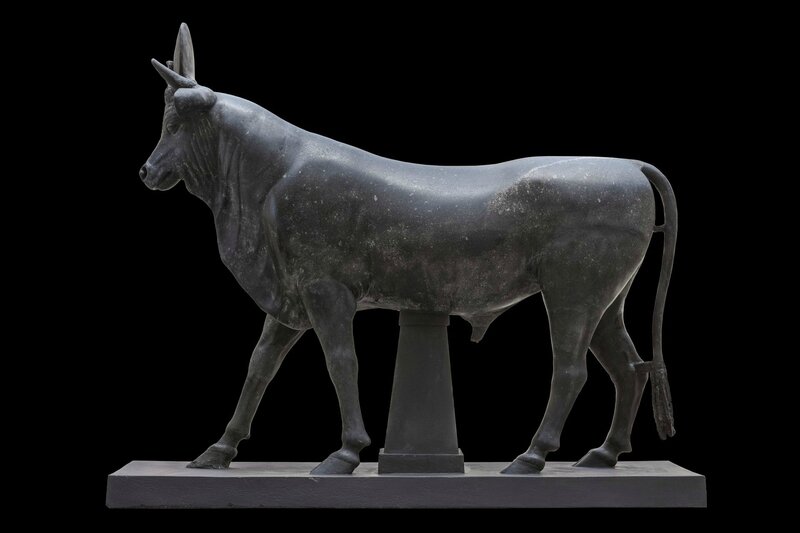 Only a tiny proportion of these sites have revealed their secrets. The on-going underwater archaeological mission continues to bring to light new masterpieces and further research every year as the most recent finds from 2012 show. Reclaimed from the deeps: Diver Franck Goddio poses with an inscribed tablet he found in the ruins of Heracleion in Aboukir Bay, Egypt. The slab, which is 1.9m tall, will be one of the treasures on display at an upcoming British Museum exhibition of underwater treasures. It is inscribed with the decree of Saϊs, which levied a tax on imports from Greece. Strapped in: A diver secures a 5.4m statue of Hapy, a divine personification of the Nile floods, to be lifted out of the waters. The colossal red granite carving will one of the exhibition's centrepieces. The six-tonne statue, which dates to the 4th Century BC is the largest known example of a Hapy statue.

Scraping away the centuries: A diver is shown uncovering the colossal Hapy statue by torchlight.

Ready for display: The full statue is shown to the right, having been restored after its long rest under the sea. A diver is pictured above after he discovered a colossal statue of the Egyptian god Hapy, a personification of the Nile floods. Sunken tablet: Hieroglyphic inscriptions, such as the one pictured above, will feature in the museum display from next May. Reclaimed: The intact Stele of Thonis-Heracleion, is pictured being carefully lifted out of the Nile delta. The inscription makes clear that it was to be placed on the site of Heracleion, a city thought lost to the sands of time, and helped archaeologists be sure that they had found the right place. 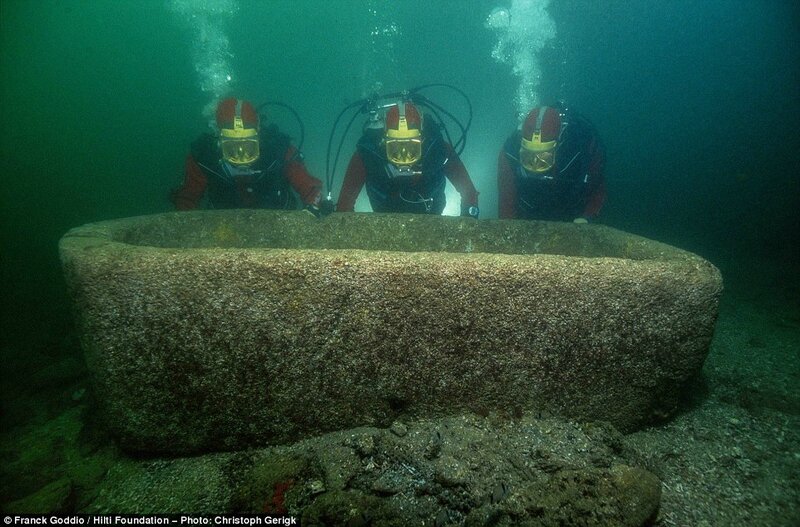 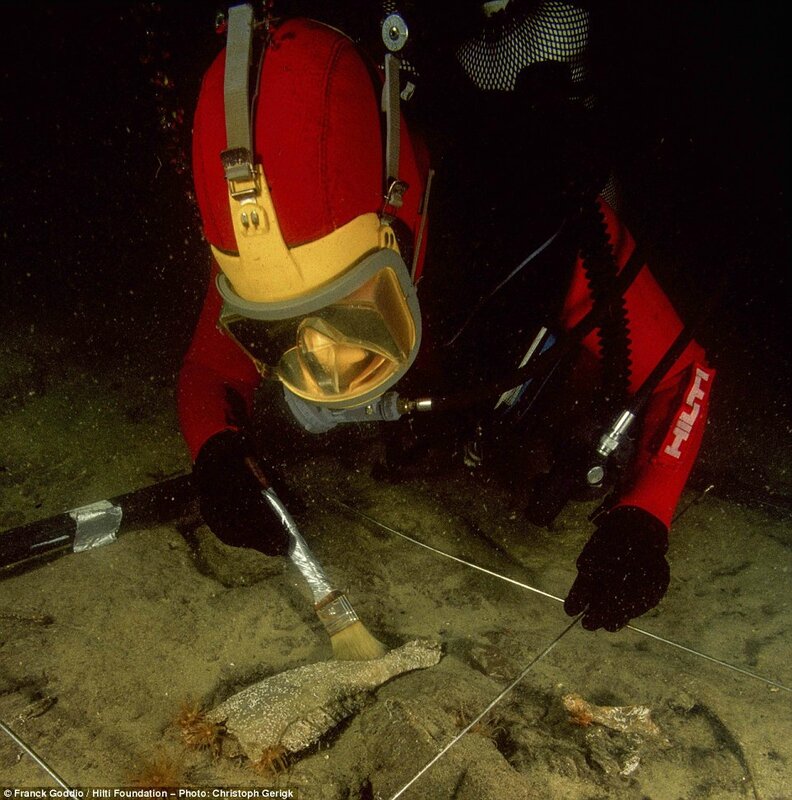 Digging deep: A diver brushes away remains from a cow's jaw bone found at the site of Canopus. Golden: This necklace, a so-called pectoral decorated with lapis lazuli and glass, is another loan item from the Egyptian Museum which will be brought to London. The item dates from as early as 940BC and belonged to Pharaoh Sheshonk II.

Special delivery: This life-sizer statue of Osiris is being loaned to the British Museum from the Egyptian Museum of Cairo for the display. The Saite statue carries a dedication from daughter of the pharaoh Psamtik I.

Under the sea: This statue, depicting queen Ptolemaic queen Arsinoe II in the form of the goddess Isis, was found in the ruins of Canopus.

Gift for the gods: Divers also found several model boats, pictured above, which were metal replicas of tiny papyrus vessels which Egyptians would have set sail at the temple of Amun-Gereb as an offering. Sleeping with the fishes: Huge columns lay underwater in the ruins of Canopus, which were found 2km east of the Nile delta. Discovery: An Egyptian sailor watches over a Sphinx dredged up from the Delta in 2001. Holy works: Picture is a bronze Osiris from around 600BC. 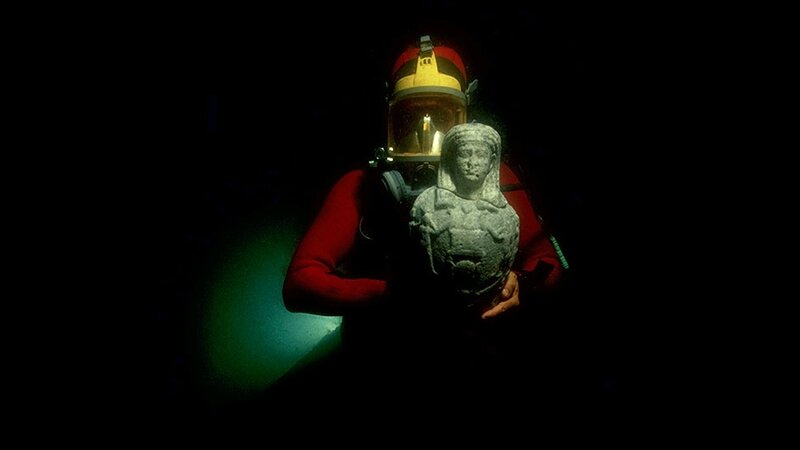