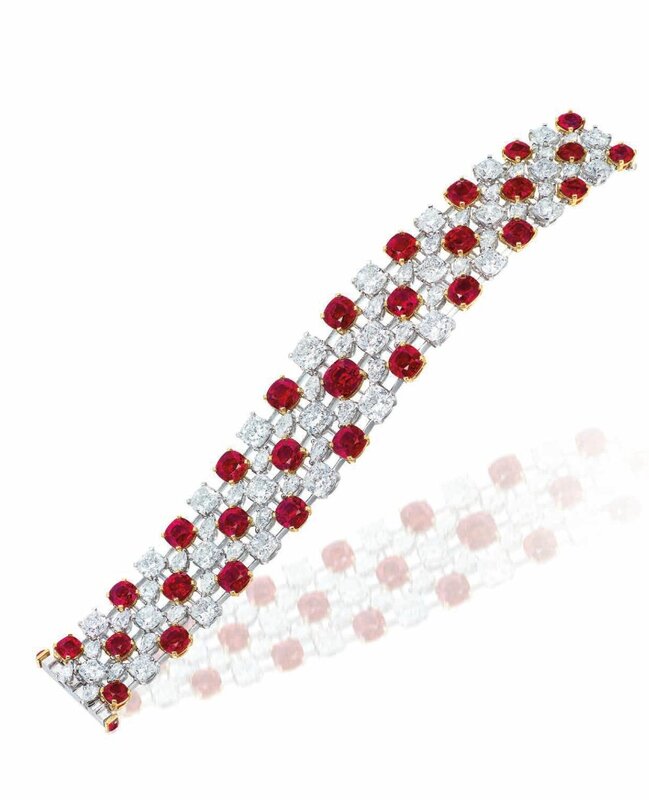 Accompanied by monograph and report no. 6225351503 dated 12 April 2016 from the GIA Gemological Institute of America stating that the rubies are of Burmese origin, with no indications of heating and the color appearance of these stones is described in the trade as “Pigeon’s Blood”

Report no. 16038077 dated 23 March 2016 from the Gübelin GemLab stating that the rubies are of Burma (Myanmar) origin, with no indications of heating and that some of the rubies are called pigeon blood red; also accompanied by an appendix stating that the rubies possess a combination of outstanding characteristics. Besides their well-matched appearance, some of them display a richly saturated pigeon blood red colour. A set of twenty-nine natural, non-enhanced rubies from Burma, endowed with such intrinsic qualities as a high transparency, combined with a saturated colour, is rare.

Premium report no. 85032 dated 18 March 2015 from the SSEF Swiss Gemmological Institute stating that the rubies are of Burma (Myanmar) origin, with no indications of heating and the colour of part of these rubies may also be called 'pigeon blood red' based on SSEF reference standards; also accompanied by an appendix stating that the ruby bracelet possesses extraordinary characteristics and merits special mention and appreciation. The rubies have been carefully selected to show a highly matching colour combined with an exceptional purity. Microscopic inspection and the analysed properties are the hallmarks of rubies from the reputed mines in the Mogok valley and from Mong Hsu (southeast of Mogok). Their attractive and saturated colour- poetically also referred to as 'pigeon’s blood red' for part of these rubies- is due to a combination of well-balanced trace elements, which are characteristic for the finest rubies from Burma (Myanmar) Assembling a matching selection of natural rubies from Burma of this quality is very rare and exceptional.

Twenty-eight reports dated from 24 December 2012 to 29 July 2015 from the GIA Gemological Institute of America stating that the diamonds range from D to F colour, internally flawless to VS2 clarity.