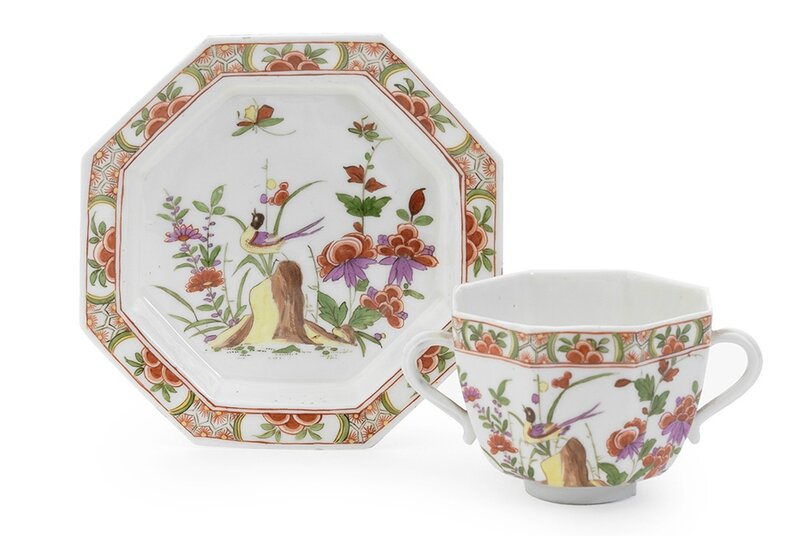 LONDON.- A collection of rare porcelain assembled by a Viennese survivor of the Nazis is to be sold at Bonhams Fine European Ceramics sale on 15 June.

The pieces belonged to Eve Newgas, née Blumka. The Blumkas were one of the most prestigious art and antique dealers in early 20th century Vienna. As anti-semitism in mid-1930s Austria grew, fuelled by the policies of the National Socialist regime in neighbouring Germany, the far-sighted family made contingency plans.

In 1936 and 1937 they sent Eve to England to spend the school summer holidays with relatives and to learn English. In March 1938, Austria was forcibly incorporated into Hitler’s German Reich, sparking widespread persecution of the Jewish population. At the beginning of September that year, having been tipped off that they were on a Nazi list, the Blumkas put their plan into action. They obtained German passports and British visas and arranged for the contents of their apartment and shops to be sent to England. According to Eve, the family had lunch, left the table with the dirty dishes on it and hurried for the railway station and the boat to England. They arrived at Harwich on 16 September and were registered as living in Hove on 17th September. When their belongings arrived several months later they discovered that the lunch plates had been wrapped in such a rush there had been no time to clean them.

Eve Blumka’s branch of the family opened a shop in Mayfair; her cousins went to New York where the business they established in New York is still going strong. After her parents retired, Eve decided to close the business but she did continue to add to the family’s private collection which as a result had pieces acquired from the late 19th century up until the 1990s.

Highlights of the Newgas collection include:

• a rare Meissen octagonal two-handled beaker and saucer, circa 1730 estimated at £10,000-15,000 which was once in the famed Edmond de Rothschild collection.

Painted in a famille verte palette with a bird perched on rockwork flanked by Oriental flowers, the rims with a trellis floral band reserved with panels enclosing flowerheads and leaves, an iron-red flower inside the beaker, caduceus and pseudo-Chinese mark within two concentric circles in underglaze-blue (2)

• a very rare Meissen teabowl and saucer, circa 1717 estimated at £8,000-12,000. The date can be confirmed from invoices for the firm’s enamel colours between 1713-19. These show that the colours used on the beaker and saucer were all in use by 1717 while black and red, neither of which are used on this lot, were first used in 1718. Moulded with acanthus leaves around the footrims, decorated in the Funcke workshop in Dresden in purple, blue, yellow and green with Baroque strap- and scrollwork borders, a similar motif inside the teabowl and a floral scrollwork border to the reverse of the rim of the saucer (minor rim chips) (2)

Note: A similar teabowl and saucer, formerly in the collections of Paul Schnyder von Wartensee and Hans and Marianne Krieger, is in the Arnhold Collection, New York (published by M. Cassidy-Geiger, The Arnhold Collection of Meissen Porcelain 1710-50 (2008), no. 68, and illustrated by Claus Boltz, Steinzeug und Porzellan der Böttgerperiode, in Keramos 167/168 (2000), ill. 59). Funcke's invoices for enamel colours between 1713-19 (Boltz, ibid., p. 143) record that the colours used on the present lot were all in use by 1717 (while black and red, neither of which are used on the present lot, were first used in 1718).

• a very rare du Paquier circular dish, circa 1720-25 estimated at £8,000-12,000. This piece was bought in Vienna by Eve’s father Ernst and came with the family when they fled Austria in 1938. Only two similar dishes are recorded in the literature. 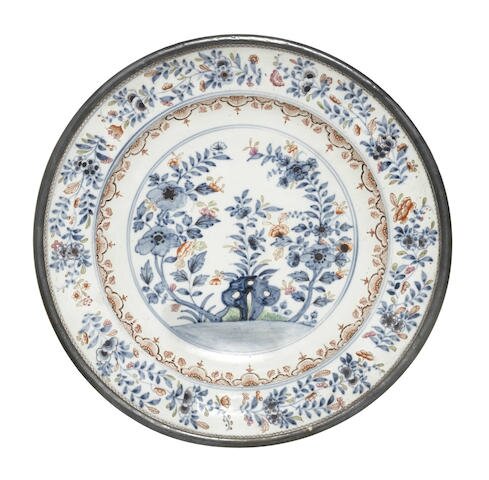 Painted in underglaze-blue, iron-red, purple and green with Oriental flowers issuing from pierced rockwork within concentric circles in the centre, within a lambrequin and trellis-panel border and trailing flowers within a zig-zag border around the silver-edged rim, three flower sprigs to reverse, 33.6cm diam.