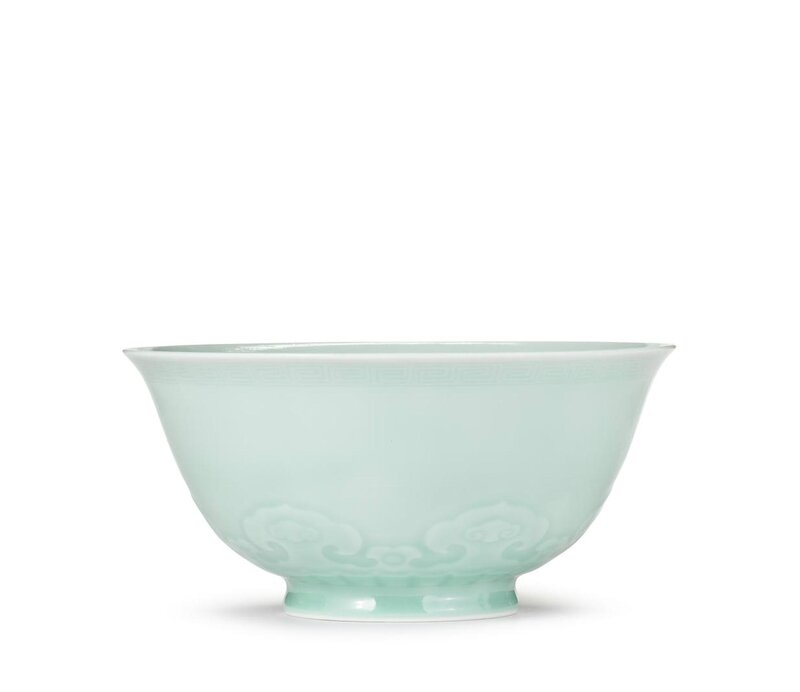 Elegantly and deeply potted with a slightly everted foot rising to a gently flaring rim, the exterior decorated with six ruyi-heads enclosing smaller lappets issuing from a band of flower petals and keyfret scrolls at the rim, covered overall in a translucent soft celadon glaze, the base with a six-character kaishu mark in underglaze-blue.

Note: Remarkable for their impeccable quality of the glaze, elegant shapes and refined bodies; monochrome porcelains made in the Imperial kilns at Jingdezhen during the Yongzheng reign are ranked among the finest examples of Imperial wares throughout the Qing dynasty. The present lot belongs to a specific group of celadon glazed porcelain specially commissioned by the Qing court to cater to the Yongzheng emperor's sophisticated aesthetic taste for monochrome wares. These series of celadon-glazed bowls have varying auspicious designs also including the Eight Buddhist Emblems (bajixing), the 'Three Abundances' (sanduo) and archaistic dragons.

This bowl is gracefully decorated with a band of ruyi-head lappets which is further accentuated by smaller lappets around the slightly splayed foot, representing auspicious wishes for long life. The Imperial artisans deliberately chose to leave the main body of the exterior unadorned, highlighting the extraordinary jade-like tone of the celadon glaze.

Commentaires sur A rare celadon-glazed bowl, Yongzheng six-character mark and of the period (1723-1735)