The Cullinan Dream is the largest of four blue diamond’s cut from the extraordinary 122.52 carat rough discovered in 2014 at the legendary Cullinan mine. Photo: Christie's Images Ltd 2016.

The sale is led by the Cullinan Dream, the largest Fancy Intense Blue Diamond offered at auction. The Cullinan Dream is the largest of four blue diamond’s cut from the extraordinary 122.52 carat rough discovered in 2014 at the legendary Cullinan mine. The mine is famous for yielding the 530.20 Cullinan I, which is the largest polished white diamond in existence and is part of the British Crown Jewels housed in the Tower of London. In recent years, the Cullinan mine has been associated with some of the most significant blue and pink diamonds to come to market. The Cullinan Dream is set with classic baguette-cut diamonds that frame this incredibly beautiful, rare, and historic diamond.

Rahul Kadakia, Christie’s International Head of Jewelry: “Selling the world record Oppenheimer Blue diamond for $57.5 million during our Geneva May 18 Magnificent Jewels sale was a great honor and we look forward to continuing this success with the Cullinan Dream, the largest Fancy Intense blue diamond to come to auction. The success of the Oppenheimer Blue speaks to the international demand and market value of these exemplary colored diamonds and with the Cullinan Dream, Christie’s is proud to present another opportunity for collectors to acquire a rare gem being offered for the first time at auction.” 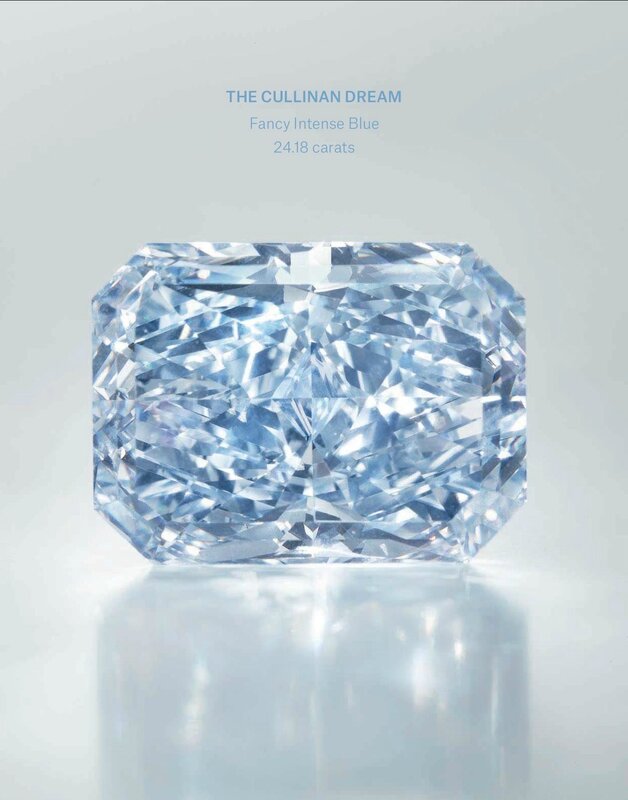 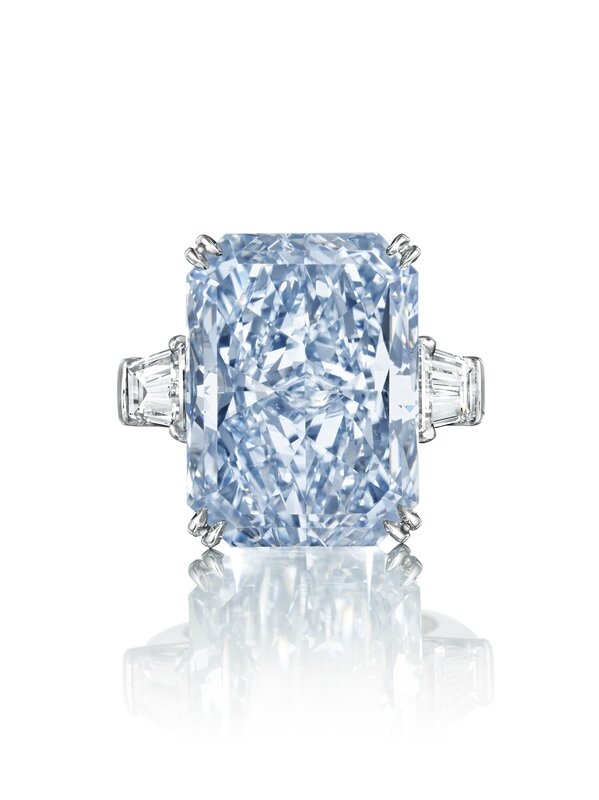 Accompanied by report no. 2175045706 dated 26 February 2016 from the GIA Gemological Institute of America stating that the diamond is fancy intense blue, natural color, VS2 clarity

With a supplemental letter from the Gemological Institute of America stating that the diamond has been determined to be a Type IIb diamond. Type IIb diamonds are very rare in nature and contains small amounts of boron that can give rise to a blue or gray coloration. An unusual property of type IIb diamonds is that they are semi-conductors and conduct electricity. Historically, the ancient mines of India produced occasional blue diamonds but today the most significant source is limited to the Cullinan (formerly Premier) Mine in South Africa. Among famous gem diamonds, the 70.21 carat Idol’s Eye and the 45.52 carat Hope are examples of type IIb

Further accompanied by a hardbound monograph from the GIA Gemological Institute of America, featuring additional photography, data collection charts and gemological research, attesting to the rarity and provenance of The Cullinan Dream. 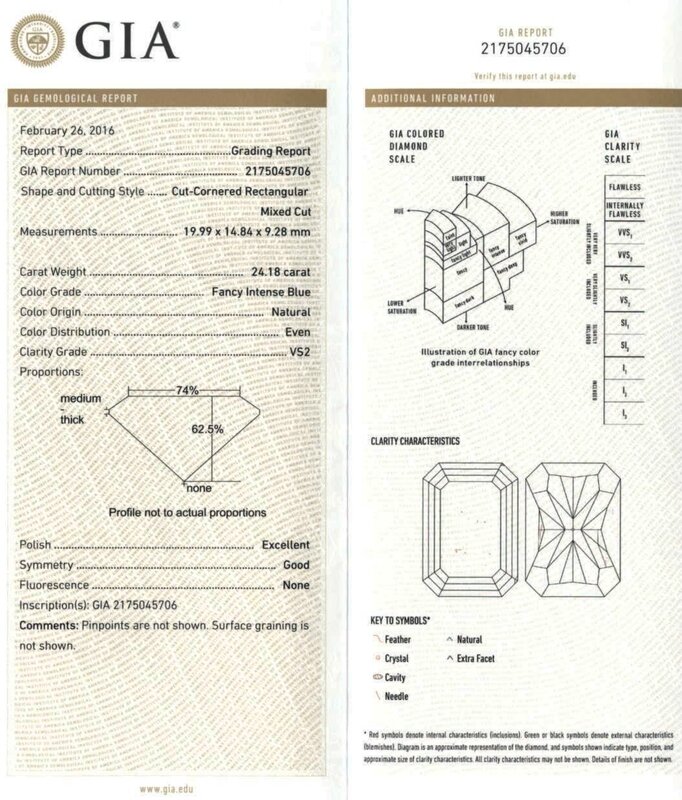 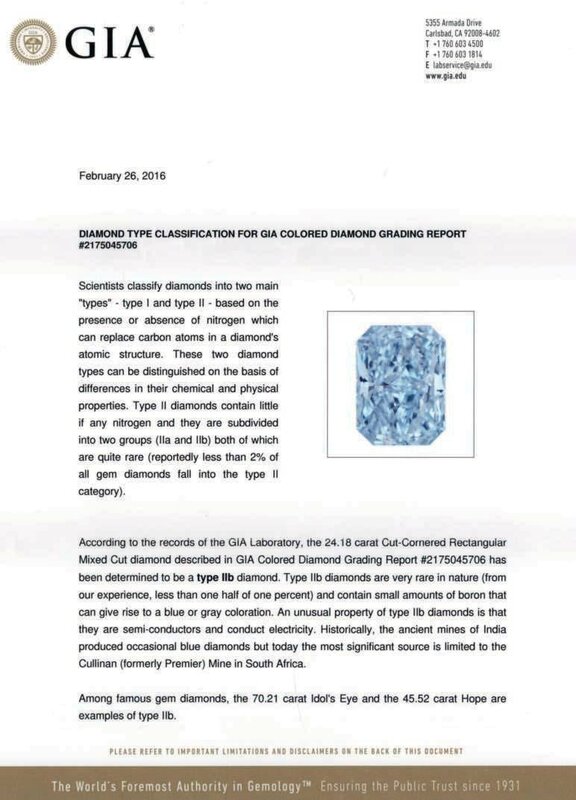 ‘The crystal structure of the gem remains in the pure form nature intended, but its ultimate beauty was achieved through the vision and talent of its master cutter. The impact of this intricate collaboration – as realized within the hardest substance on earth – cannot be compromised. The Cullinan Dream reminds one to celebrate nature and the craftsmen who embrace its wonders.’ – GIA, Gemological Institute of America

In June 2014, Petra Diamonds Limited announced the discovery of a 122.52 carat blue diamond rough from South Africa’s Cullinan mine. Entrusted to a master cutter, the rough was meticulously analyzed and the best yield was determined. This resulted in four notably sized diamonds: a cushion-cut diamond of approximately 7.00 carats, a radiant-cut diamond of approximately 10.30 carats, a pear-shaped diamond of approximately 11.30 carats, and finally, a cut-cornered rectangular mixed-cut diamond of approximately 24.18 carats.
Named The Cullinan Dream for its captivating and celestial beauty, the 24.18 carat diamond has been graded by the Gemological Institute of America as a fancy intense blue diamond and classified as type IIb. Type IIb diamonds are very rare in nature and contain small amounts of boron that can give rise to a blue or gray coloration. Accounting for less than one-half of one percent of all diamonds found in nature, type IIb diamonds are highly rare and lack a symmetrical crystal form. Without a distinctive pattern, the appropriate cleaving and polishing directions are not as certain as type Ia diamonds, which are typically octahedral or dodecahedral in form. Due to these irregularities, the diamond cutter must be diligent and precise in his planning while studying a type IIb diamond rough.
An unusual property of type IIb diamonds is that they can be semi-conductors and conduct electricity. Historically, the ancient mines of India produced occasional blue diamonds but today the most significant source is limited to the Cullinan Mine, where The Cullinan Dream’s rough was uncovered. During testing, The Cullinan Dream displayed this electrical conductivity. Strength of electrical conductivity can indicate stronger and weaker areas of color saturation in a rough diamond.
This property, along with visual observation, is extremely valuable for a diamond cutter when determining the best way to ensure a highly saturated color appearance in a finished diamond. The diamond cutter of The Cullinan Dream is clearly a master of his craft, as this gem exhibits the diamond’s true natural brilliance while radiating through its delicately handcrafted facets. The Cullinan Mine
One of the most renowned and celebrated mines in the world, the Cullinan is located in South Africa, at the foothills of the Magaliesberg mountain range, on the largest diamond-bearing kimberlite pipe in the region. Nearly six times bigger than any of the previously discovered Kimberley district diamond pipes that had been causing excitement since the late 1860s, the discovery of the Cullinan mine in 1902 was one of the most significant in the history of diamonds.
Formerly known as the Premier mine, the Cullinan has yielded the majority of the most legendary and impressive diamonds of our time. The production statistics speak for themselves: 750 stones weighing more than 100 carats, 130 stones weighing more than 200 carats, and more than a quarter of all diamonds in existence weighing more than 400 carats.
The most significant diamond discovery of modern history, the uncovering of a 3,106.75 carat rough in 1905, from the Cullinan mine resulted in both the Star of Africa and the Second Star of Africa. To this day, the Star of Africa is the largest polished white flawless diamond in existence, and both the Star of Africa and the Star of Africa II are part of the Crown Jewels in the Royal Collection of England. Other notable diamonds from the mine are: The Premier Rose (353 carats rough), The Niarchos (426 carats rough), The De Beers Centenary (599 carats rough), Golden Jubilee Diamond (755 carats rough), the Taylor-Burton Diamond (69 carats polished), and most recently in 2009, The Cullinan Heritage (507 carats rough). Inside The Cullinan Mine. Photo Christie's Image Ltd 2016.

With its rich and varied history, The Cullinan mine is known to be the only significant and reliable source of blue diamonds in the world. Petra Diamonds Limited acquired the mine from De Beers in 2008, and even under its short period of ownership, record blue diamond discoveries continue. Noteworthy are the 39.9 carat diamond, selling for $8.8 million dollar in 2008; a 26.60 carat diamond, which yielded a fancy vivid blue internally flawless 7.00 carat stone, selling at auction for 1.35 million per carat, and a 29.60 carat diamond selling for $25.6 million dollars or $862,780 per carat in 2013.

Acquiring this incredible, fancy, intense blue diamond offers collectors not only an incredibly rare and beautiful diamond, but a significant and historic stone from the most famous mine in the world.