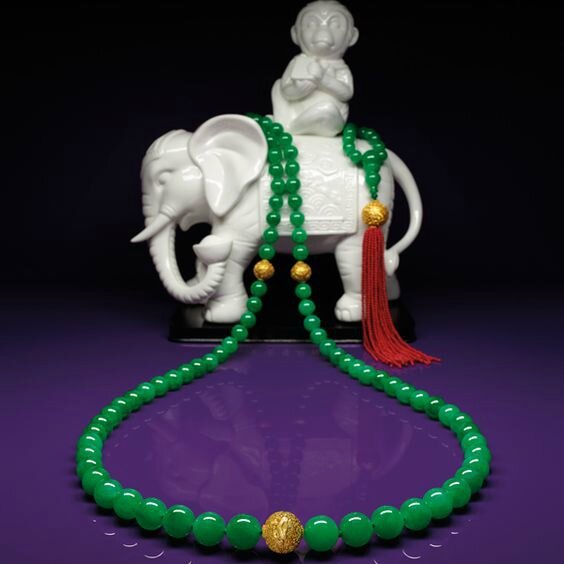 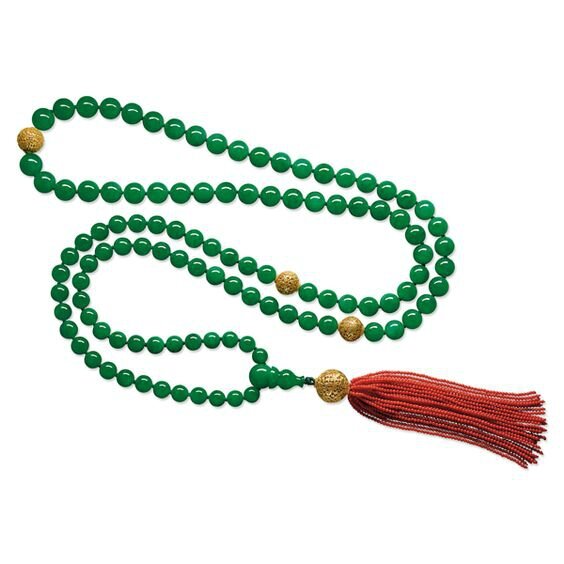 Accompanied by Hong Kong Jade & Stone Laboratory report numbered KJ92661(1-5), dated 31 March 2016, stating that the jadeites are natural, known in the trade as 'A Jade'

Jadeite was traded extensively in the provinces of Yunnan and Xinan for nearly four centuries prior to its discovery by the imperial court in the early Ming dynasty. After the Qing dynasty came to power, jadeite was greatly treasured by Emperor Qianlong and the nobility under his reign. Subsequently prized by Empress Dowager Cixi and Madame Song Qingling, jadeite has continued its popularity unabated and prevailed in the culture of Chinese jewellery.

Jadeite is formed under high pressure and relatively low temperature conditions. Only Burma offers these unique geological conditions and due to its low output, coupled with the wide disparities in the quality of rough, it is exceptionally hard to find jadeite that is superior in colour, texture and transparency. Owing to the complex crystalline structure, jadeite is predisposed to cracks and inherent flaws. Given such considerations, jadeite traders and craftsmen tend to favour thecabochon cut for a less wastage of material and its marketable value. Only when the jadeite rough is of a considerable size with fewer flaws would it be fashioned a bangle or a bead necklace. Hence, the price of a jadeite bead necklace of similar quality would fetch much higher than that of a cabochon design.

To fashion a strand of jadeite beads, round beads are polished from smaller rough pieces before they are perforated and strung together. Immense wastage is involved during the process. In order to have a matching bead necklace, all the beads must be carved from the same boulder. In order to put together the perfect and most matching ones, as many as thrice the desired number of beads are often needed. It is an utter challenge to amass a strand of jadeite beads than just a single bead.

If a hairline crack appears in the bead during the polishing process, the bead will be wasted. Size, colour and texture are the utmost important qualities for a matching jadeite bead necklace. The risks of crafting them are immensely high. This is why matching a bead necklace demands absolute supreme quality in the jadeite rough. Notably exceptional and rare, the possession of a strand of old-mine jadeite bead necklace is considered the ultimate symbol of wealth and status amongst the distinguished upper class in Asian society.

This spring, Tiancheng International is offering a necklace composed of 108 perfectly round and intensely green jadeite beads. Putting together a strand of jadeite bead is a great challenge, not to mention amassing 108 beads of matching colour and texture. One hundred and eight is considered sacred in Hinduism, Buddhism and Jainism. Many Hindu gods possess 108 names. The court necklaces were inspired by Buddhist prayers beads which as mentioned in the sutra, usually consisted of 108 beads to indicate the 108 vexations in the ten spiritual realms that can only be eradicated by spiritual cultivation, through which both body and mind attain a state of stillness. Court beads were part of the officials’ court costumes in Qing dynasty and were only worn when the Emperor and his fellow councilors attended meetings in court. Only officials ranked level four or above were allowed to possess or wear court necklaces. Representing the twelve lunar months, twentyfour solar terms and seventy-two pentads of the lunar calendar, these 108 court beads are the epitome of wisdom and good fortune.